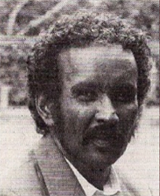 Xaaji was born in 1951 at Gar-Adag in Sanaag Region. He was a quiet, thoughtful man who preferred work to leisure. When not teaching, his principal pastime was reading. He consciously [si ula kas ah] avoided wasting his time with political debates in teashops. He acquired the nickname “Xaaji” as a child because he was quiet, well-behaved and studious; he never actually visited the city of Mecca in Saudi Arabia.

As a young adult Xaaji moved to Muqdisho and completed his degree in education at Lafoole College. He began teaching in northern Somalia, and then later taught in schools in the south, at Qoryooley and Kurtunwaarey. After more than 10 years working as a teacher, Xaaji was chosen to pursue a master’s degree at the University of Saskatchewan. When he first arrived in Canada in 1980 Xaaji was full of doubts about whether any religion was true.

However, while studying at the University, Xaaji met some committed followers of Jesus Christ. Though their witness, he began to read the Bible and he placed his trust in the Messiah. Upon returning to Muqdisho in 1984, Xaaji became a professor of education and curriculum development at Lafoole College. He also attended the weekly worship of the small Somali Believers Fellowship that met in Muqdisho in those days. Xaaji also shared his faith with some of his family.

After the civil war broke out in 1991, Xaaji did not return north to his home region but rather remained in Muqdisho. He worked for various humanitarian organizations, particularly in the area of education. In both 1993 and 1994 Xaaji went to Nairobi, Kenya for training courses, and both times he returned back to Muqdisho to resume his work in education.

During the first two months of 1994, Xaaji often spent his afternoons with Liibaan Ibraahin Xasan, discussing topics from the Bible. Their offices were in the same part of Muqdisho. On March 21, Xaaji had arrived early for work and was sitting in a teashop near this compound when he saw Liibaan coming. Suddenly, as Xaaji watched horrified, masked gunmen shot Liibaan dead in front of him. Here is the biography of the martyr Liibaan: HERE

When Xaaji returned to Nairobi at the end of 1994 for another seminar, he mentioned that he was greatly concerned for his safety as activities of jihadists had increased in Muqdisho. On 3 April 1996, Xaaji Maxamed Xuseen was kidnapped. His body was found the following day in an abandoned building near his house.

After his death, at a memorial service in Nairobi, one Somali Christian remembered him in this way: “There were times that I have been tempted to cover up my faith. The last time I saw him, he challenged me never to deny my belief in Christ. Now, after his death, I want to be as brave as him and, if need be, to die rather than pretend I am not a Christian.”

At this memorial service, another friend also remarked that he noticed that Xaaji was more concerned about threats from jihadists in the last months before his death. At the same time, in terms of his spiritual life, he had been more open in witness and fervent in prayer. Another friend found a new position for employment for Xaaji—but this was found the same week that Xaaji was martyred. Xaaji was the sixth Somali Christian to be killed in Muqdisho after the death of Liibaan Ibraahim Xasan on 21 March 1994.

Xaaji was a dedicated Somali patriot who did not allow the disease of clan-ism to dominate his thinking or his actions. He even undertook a very sensitive research project on inter-clan relationships in 1987 with five graduate assistants. Their findings provided a clear warning to the dangers that clan-ism [qabyaalad] would have to bring disintegration to the Somali nation. After 25 years, the recommendations Xaaji wrote at the conclusion of his report are still as valid and useful as when he wrote them. If they were to be implemented, they would be very helpful to heal and rebuild Somali society.

In his academic work, Xaaji showed how he followed the teachings of the Lord Jesus Christ who told his disciples to love their neighbors as much as they loved themselves, and even to love their enemies. [Matthew 5:43-46]. Furthermore, he demonstrated how his faith in Christ made him a good citizen, even when the government had disintegrated [Romans 13:1-7]. Xaaji was definitely a peacemaker as described by the Lord Jesus Christ in his Sermon on the Mount [Matthew 5: 9-12]. Xaaji was humble and frank about his own shortcomings. He also believed that it was important for teachers to influence people when they were young in order to see significant changes in belief and behavior.

Information from a family member of Xaaji living in Addis Abeba, Ethiopia who was led to faith by him. This person translated his biography into Somali and reviewed it for accuracy.

Information from an expatriate from Norway who knew Xaaji very well and was in and out of Somalia a lot in 1990s.

This article, received in 2022, was written by Ben I. Aram, who is Director of The New Life Media, a multi-platform social media/website ministry that communicates the Gospel in the Somali language. Ben I. Aram served seven years inside Somalia, then worked in media with Somali refugee Christians in Kenya and Ethiopia for fifteen years. This article was written and translated to Somali as part of the New Life’s website “Somali Church History” section, Somali Christian biography subsection, with the aim of encouraging Somali Christians and enlightening Somali Muslims. 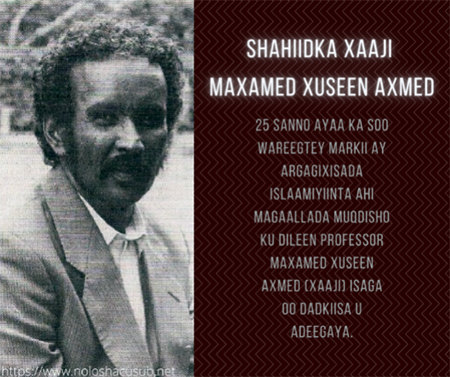