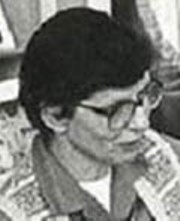 Louise Pirouet (1928-2012) has been described as “a master of the short biography” (comment by Terry Barringer who gave the eulogy at her funeral). She was one of pioneers of the study of Ugandan Christianity, seconded from the Church Missionary Society to the Department of Religious Studies, Makerere University from 1964 to 1970. While there she researched and completed her PhD thesis on how African Protestant catechists pioneered the growth of the Anglican Church beyond Buganda. She also created the first generation of tools for the study of Ugandan Christianity: the collection of church records and archives, a slide show for teaching East African Church History, editing and publishing Dini Na Mila, even a tour of religious sites in Kampala to illustrate Uganda’s religious history and the writing of short biographies of Ugandan Christians. (text from Angus Crichton)

Louise came to Homerton from the University of East Africa, at Makere in Uganda where she had been teaching religious studies and undertaking radical and innovative research. She subsequently taught for many years in the Religious Studies Department at Homerton alongside Jean Holm and Grahame Miles.

In Uganda, she built on her doctoral research which had involved the extensive interviewing of African Christians about their perceptions of the faith that they had received from European missions. She was supportive thereby of the earliest African scholars’ own expressions of their adopted and developing theology. Louise left Uganda in the wake of Idi Amin’s ejections of foreign personnel and persecution of many of his own people. She had developed a deep attachment to Uganda and its people and retained many contacts both in that country and with exiles in the UK. There was a constant stream of visitors to her home and many also passed through Homerton.

Pirouet was born to missionary parents in Cape Town, South Africa, but her family returned to England, where she was educated and entered the teaching profession. She returned to Africa with the Church Missionary Society, teaching at a girls’ school in Kenya before completing her Ph.D. at the University of East Africa, Makere, Uganda; her thesis was published as Black Evangelists: The Spread of Christianity in Uganda, 1891–1914 (1978). Pirouet subsequently taught at the University of Nairobi, Kenya, and from 1978 to 1989 in the Department of Religious Studies at Homerton College, University of Cambridge, where she continued her work on African history. (From “Noteworthy,” p.147, International Bulletin of Missionary Research, Vol. 37, No. 3, July 2013).