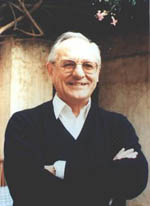 Pierre Claverie, Catholic Bishop of Oran and protagonist of Islamo-Christian dialogue, was assassinated by Islamic militants in a booby trap explosion at the entrance to his house. His young Algerian driver, Mohammed Bouchikhi, died with him and the mingling of their blood was seen by many as a symbol of the bishop’s desire to find a home in the hearts of the Algerian people and to participate in their sufferings.

Claverie was born in Algiers in 1938, the child of French settlers, or pieds noirs (“black feet”). He had a happy childhood in a loving family but had no contact with the Arab Muslims among whom they lived. As a teenager, he joined a scout troop run by Dominican priests (Order of Preachers). After his schooling at a lycée in Algiers, he went to the University of Grenoble in France in 1957 to study mathematics, physics, and chemistry, at the very moment when the future of the French colony hung in the balance. At first he joined a group of right-wing student activists from Algeria, protesting against the Catholic left and burning their newspapers, but gradually he began to see his opponents’ point of view and to condemn the atrocities of the guerrilla OAS (Secret Organization of the Army) in the land of his birth.

After two years at Grenoble, he joined the novitiate of the Order of Preachers near Lille, and came under the influence of the celebrated Dominican theologians Chenu and Congar. He continued his studies for the priesthhood at Le Saulchoir, where he made his profession, and then returned to Algiers for non-combatant military service. After the failed coup d’état by elements of the French Army and the OAS in 1961, the French withdrew and Algeria obtained its independence in the following year. Claverie went back to France and continued his theological studies at Le Saulchoir, being ordained priest in 1965.

Claverie returned to the new Algeria in 1967 and at once set about learning Arabic with the Lebanese Sisters of the Sacred Hearts at their Arabic Pedagogical Institute. He soon became fluent in the language and spoke it with a good accent. At the same time he began to explore links with Algerians and with Islam. Popular Islam in Algeria had been Sufist, but new Sunni teachers from Egypt and Saudi Arabia were installing a more orthodox form of religion and campaigning against non-Arab traditions such as those of the Kabyles and other Berbers. This created a powerful movement of reformist or fundamentalist Islam.

Claverie lectured at the Diocesan Institute of the rue des Glycines, succeeding his friend Henri Teissier as director, and forming lasting friendships with Algerians of all classes. His friend Pastor Jacques Blanc introduced him to the World Council of Churches Association Encounter and Development, of which he eventually became the director. Claverie resisted attempts to appoint him to the Dominican Islamic Institute in Cairo or even to study at the Pontifical Arab and Islamic Institute in Rome, run by the Missionaries of Africa. His overriding aim was to remain in, and identify with, Algeria.

When Henri Teissier was appointed Coadjutor of Algiers, Claverie succeeded him as bishop of Oran in 1981. The homily he preached in Arabic and French at his Episcopal ordination was a manifesto for Christians in Algeria as a minority in the “House of Islam,” stressing the need for mutual respect and tolerance, while eschewing all forms of aggressive evangelism or fanaticism. Almost his first acts as bishop were to donate a church to be a mosque and to turn his cathedral into a cultural centre, where his Muslim friends gave lectures and conferences. He also struck up a life-long friendship with the Methodist pastor David Butler.

As bishop, Claverie was first and foremost a preacher, undertaking speaking engagements, giving retreats, taking part in discussions, and composing the editorials of his diocesan magazine. He was not afraid to speak his mind, but was happy to be contradicted. People were attracted by his human warmth, his gift of relationship, and the solidity and clarity of his ideas. These characteristics were underpinned by a simple, religious style of life, and a deep concentration in prayer.

Following the teaching of the Second Vatican Council, Claverie developed an original approach to Islamo-Christian dialogue. While Algeria was in the process of becoming more and more polemical, he abandoned “conference dialogue” and called for exchanges of mutual confidence in a dialogue of life. He aimed to respect consciences and to listen to the Holy Spirit speaking outside the visible church. In 1987 Claverie was appointed to the Pontifical Council for Interreligious Dialogue, continuing his search for a “dialogical Islam.” Dialogue meant sincerely accepting the difference of others without compromising essentials. Later, he helped draw up the Council’s document Dialogue and Proclamation, which envisaged a place for Islam in the economy of salvation, a faith leading to the true God.

Against a background of growing intolerance in Algeria, Claverie was invited to propound these ideas at the Paris Mosque in 1988. This celebrated conference in Arabic and French began by lamenting the legacy of polemic and exclusion shared by Christians and Muslims alike. The speaker then emphasized the importance of contacts and exchanges, the need to recognize the other as a responsible and free subject and the necessity of creating a climate of confidence and friendship, while effectively confronting differences. It was an eloquent appeal for reciprocity as a condition of dialogue.

In 1987 Claverie launched his application for Algerian citizenship. Although this had not been finalized by the time of his death nine years later, the bishop found his home more and more in the hearts of Algerian people, and less and less in the lands, buildings, and institutions of the church. In Algeria the Catholic Church was being pushed more and more to the margins, being divested of its social position. Christians were evicted from posts of responsibility and church personnel were now almost wholly at the service of Algerian institutions and the Algerian poor. The Arabo-Muslim character of the country was stressed and Christian missionaries who stayed were those who really wanted to do so. Claverie had no regret for the church’s loss of influence. The church, like its founder, must give its life for others. Although his flock was increasingly made up of foreign oil workers and students, Claverie insisted that it was not a church of marginal people. It had to be integrated within the Algerian context.

Meanwhile, the Front for Islamic Salvation (FIS) was igniting a social and Islamic revolution against the FLN (Front for National Liberation) government and the ruling classes, grown wealthy on petro-dollars. With the victory of the FIS in the multi-party, municipal elections of 1991 and the cancellation of its general election victory by the army in the following year, the stage was set for civil war. Claverie condemned the military take-over and sympathized with the social aims of the FIS. However, the Islamists, following the example of the OAS, attempted to take power by force, through armed commando groups trained in Afghanistan. The Assassination of President Boudiaf in 1992 was followed by the murder of intellectuals, writers, and artists. It was not long before the escalating violence engulfed the church. Claverie condemned the violence and welcomed the Algerian youth who became secret Christians in reaction to Muslim extremism.

In 1994 Claverie attended the Special Assembly for Africa of the Synod of Bishops in Rome, but the year also witnessed the assassination of four Missionaries of Africa and four other religious in Algeria. Claverie denounced the cowardice of the murderers but declared that Christians in Algeria were in the right place – at the foot of the Cross, along the “fracture lines” of Algerian society. In 1995 the misguided attempt of the Community of Saint Egidio in Rome to broker peace between Muslims in Algeria, led to a serious misunderstanding with the Algerian government. The Algerian bishops, who had not been consulted about this initiative, were torn between their loyalty to the government and their desire for peace. Three more religious sisters were assassinated at the end of the year and then in 1996 the seven Trappist monks of Tibhirine. Claverie took comfort from the poem of Hawa Djabali, composed in honour of the Christian martyrs. “They stayed and we asked why. There was no answer. It was a long fidélité” He took even more comfort from Dietrich Bonhoeffer’s heroic fidelity to the Kingdom at the end of the Second World War. Bonhoeffer had written, Claverie recalled, “The Kingdom comes for us in our death.”

Claverie took precautions for his own security, but was spiritually well prepared for the end when it came on August 1, 1996. As a Muslim friend (Redouane Rahal) said of him: “Algeria, which saw the birth of Saint Augustine and Sheikh Ben Badis, is honoured to have sired a Pierre Claverie. For them and for him it was the same journey in the fight for justice and the respect for others in their difference.”