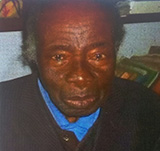 The firstborn of catechist Alfredo Sanguele and Tchopetu, Cambonde was born on January 1, 1932 in the village of Tambi-Nôndua, in the town of Kalukembe in Huila province, Angola.

From his infancy, his parents instructed him in the way of the Lord. When he reached school age, they sent him to the Filafricana Evangelical Mission boarding school. After completing his education in 1953, he married Isabel Jambela Jeremias and they had nine children.

Cambonde converted to Christ in 1946 and was baptized in 1947. In 1950, he obeyed the call to the ministry of preaching the gospel and entered Kalukembe Bible school, graduating in 1952. He served the Lord as an evangelist in the Evangelical Church of the Southwest of Angola from 1952-1961 and was ordained into pastoral ministry in 1962.

He was named general director of youth for the Evangelical Church of the Southwest of Angola in 1956. In 1960, he was named to the Department of Evangelism commission, led at the time by Swiss missionary Edme Kotier.

In 1976, he was named secretary of the southern field of IESA, a position he held until 1986. In 1987, he was named secretary of the regional synod of Kaluquembe by the IESA executive committee. He served in this role until 1990. In this same period, he also held the offices of vice-president of IESA and adjunct general director of the Medical Ministry of IESA, which gave him huge influence.

In August 1990, Cambonde was named general secretary of IESA by the IESA executive committee, and he held this position until 2002. Between 1996 to 1998, he served both as general secretary and president for IESA because of the armed conflict in Angola. The president of IESA, Pastor Eliseu Simeão, was forced to flee his home in Huila and leave his office during that time.

Cambonde retired in 2002. He was named general counselor of IESA in 2006 and held this office until his departure for the glory of the Lord in 2006. He wrote a book about the history of the IESA denomination, Ociseleko in the Umbundu language, which means Tesouro in Portuguese (Treasure in English).

Cambonde spent his last days living in his home in Kalukembe, Huila province, suffering a long, debilitating illness. He died in March of 2019, at 87 years of age, and was buried in his hometown in Etambi-Nôndia cemetery.

This biography, received in 2020, was written by Valdemar David Canhenhe Missas, a candidate for the Master of Arts in Theology, with a specialization in linguistics and Bible translation, at the Higher Institute of Evangelical Theology in Lubango (Instituto Superior de Teologia Evangélica no Lubango, ISTEL). He holds an honors bachelor’s degree from the same institution. He also graduated from the Kalukembe Bible Institute as an evangelist in 2011-12. He is a pastor, evangelist, and regional youth leader in the IESA (Igreja Evangélica Sinodal de Angola). He is a pastor in Kalukembe, Huila province, Angola, and professor of “Panorama of the Old and New Testaments” at the Kalukembe Bible Institute. This biography was written under the supervision of Sindia Foster, instructor at ISTEL and missionary to Mozambique with Serving in Mission (SIM).