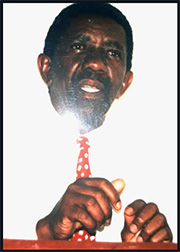 One of the people who contributed substantially to the ecumenical movement in Botswana was Churchill Gape. He played a very important role in the life and work of the Botswana Christian Council (BCC). He was born on the 8th October 1940 at Petersburg in the Republic of South Africa and died on 13th August 2010 in Botswana. His father, William Joseph Gape, was a Methodist. He was born in Mafikeng in 1907. His mother was also born in Mafikeng on 10th October 1918. She was called Lydia Kagiso Gape and her maiden name was Mokgwetsi.

Churchill was the first born in a family of six children. There were five girls and only one boy. When his father was living in Vendersdorp in 1945, he saw Churchill as a young boy clinging to a passing vehicle. His father was furious and became exceedingly worried that if he left him in Vendersdorp, he would be involved in a car accident. So he decided to send him to Mafikeng in 1945.

Churchill went to school in 1947 in Mafeking where he completed standard 1. In 1951, they took him to Warmbath where they stayed for a year. They then moved to Meyerton where the young Churchill did his schooling from standard 2 to standard 5. At the end of 1955, he was moved to Good Hope where he did his standard 6. In 1957, he went to Moeng College where he stayed until 1961, studying for his Junior Certificate. Afterwards he joined the Matriculation Board. Then he started teaching in a primary school in Good Hope. After teaching for a while, he went to Lobatse Teacher Training College where he stayed from 1962 to 1963. When he completed his studies, he went to teach at Hill School in Lobatse until 1968 when he resigned from teaching.

In 1968, he joined the Community Development Department (CDD) in Gaborone where he worked until 1970. In 1970, he left the CDD and joined Chibuku Breweries as a trainee brewer. In 1971, he met his wife Gracious Gaulebale Gape and they were married in 1972. Churchill left the brewery after four years of work and joined Sefalana Wholesalers. He worked for Sefalana until the end of 1978.

In 1979, he went home to try his luck as a farmer. Unfortunately, things did not work out well for him. He ploughed his land and spent more than R2,000-00 on capital expenses such as hiring a tractor, labor, and other things, and yet only produced 40 bags of grain. He was greatly shocked by this turn of events.

It was at this bleak moment in his life that Pastor Wesley Mabuza of the Methodist Church persuaded him to join the Botswana Christian Council that was looking for a General Secretary at the time. Gape submitted his application for the job. It seemed that God destined him to have this job because he was eventually appointed General Secretary of the Council. He took office on 3rd January 1980. He succeeded Rev. James Ndebele who died in a terrible road accident in 1979.

In 1983, in pursuit of knowledge, Gape asked for leave of absence to study for a degree in administration at the University of Botswana. Unfortunately, when he registered for the program he found out that economics was a requirement to obtain the degree that he was intending to get. He was not good in this subject. He studied at the University of Botswana for three long years but left the university in 1986. He had not succeeded in achieving his goal.

That same year, he rejoined the Botswana Christian Council at the time when Mr. Mmono was General Secretary of the Council. Mr. Mmono Left the BCC in 1988 in order to accept public office when President Dr. Quett Masire asked him to join the government as an electoral officer. Churchill Gape was re-appointed General Secretary of the BCC in 1988 and served until the 1994 Annual Assembly, which was held in Lobatse.

He eventually had to leave the Council because of the lack of funds. Several donors from Europe began to tighten their purse strings and funds soon ran out. The withdrawal of financial support from overseas donors started in the early 1980s. When the Botswana Christian Council approached donors for financial assistance, they were told that no funds would be forthcoming since the economy of Botswana was healthy and capable of sustaining itself. Donors argued that there was no need for the Council to come to them to ask for financial support for their projects year after year while the economy of Botswana was growing so dramatically. Of course, the BCC was not the only Christian Council in Africa that experienced this hardship. A number of Christian Councils were also hit very hard to the point of collapsing.

In view of the difficult situation, the Christian Organisations Research and Advisory Trust of Africa (CORAT) based in Nairobi, Kenya, came at the request of the BCC to assess the work of the Council. The mission of CORAT is to enable churches and church-related organisations in Africa to improve their management capabilities. CORAT noted that the staff was too large and recommended that it be reduced from 32 to six members of staff.

In hindsight, Gape was of the view that the recommendation was too drastic and that the consultants had come with an already premeditated decision that took no account of the dire consequences that befell the majority of the people who were let go. The recommendation necessitated the firing of many members of staff in 1994. The General Secretary was the first to decide to leave the Council. Donors had stopped funding both the projects and the salaries of members of staff at the Council. The area that suffered the most was personnel.

Gape contributed significantly towards the life and work of the Botswana Christian Council. During his tenure as General Secretary, he was particularly concerned with the events taking place in the region. He was directly involved in the repatriation process of refugees from Zimbabwe in 1980 and the repatriation of Namibian refugees in 1990, as well as return of South African and Basotho refugees in the early 1990s. At the height of struggle for independence in South Africa, Gape welcomed refugees at his home when they were either in transit to other countries or lost in Gaborone, not knowing where to go and in need of food and shelter. Gape came into contact with many refugees who were passing through Botswana to study abroad thanks to scholarships from the World Council of Churches. Some of the scholarships were administered through the Botswana Christian Council. Sometimes prayers were held at the border with South Africa to pray for the independence of that country and its people.

Gape also observed that the Council’s greatest achievement during his tenure of office as General Secretary was the building of Kopanyo House in Gaborone. The people who helped the Council most in this venture were the Evangelische Zentralstellefur Entwicklungshilfe (EZE) a Protestant Association for Cooperation and Development in Germany. Gundy Augustine, their project officer, agreed to make a donation of P1,000,000-00 to the Council to write off the National Development Bank loan. Additional help came from the Norwegian Church Aid. Unfortunately, nothing came from Dunchurchaid despite many appeals for help.

Photo from Botswana Council of Churches.

This biography, received in 2018, was written by Dr. James Amanze, General Secretary of the Association of Theological Institutions in Southern and Central Africa (ATISCA), Professor in the Department of Theology and Religious Studies at the University of Botswana (Gaborone), and DACB Advisory Council member. These stories were written as part of a collection documenting the history of the ecumenical movement in Botswana, an unpublished manuscript entitled “Heroes and Heroines of the Ecumenical Movement in Botswana: Celebrating Great Lives, Celebrating Past Leadership.