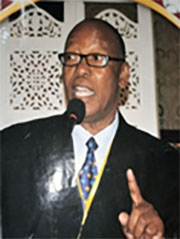 Joseph Shadrack Matsheng was an important leader in the ecumenical activities of the Botswana Christian Council. He was born on 27th September 1937 at Borobadilepe in Barolong Farms and died on 7th October 2016. He was the last born of eight children. His mother was Priscilla (Kgoe) Matsheng and his father was Judea Matsheng. They were originally from Tabanchu, South Africa. Mr. Judea Matsheng was the first preacher in Borobadilepe in the Methodist Church while Mrs. Priscilla Matsheng became the first teacher of the Borobadilepe Primary School. The school started in her house. She held concerts to raise funds to buy benches for the school.

The Matsheng family was responsible, to some extent, for introducing the Methodist Church to the area. Matsheng was originally baptized in the Methodist Church and received the name Shadrack. He attended Catholic Primary School in Mafikeng in 1948 where he was baptized in the Roman Catholic Church with the name Joseph. Originally, the family was from Dinokaneng in Lehurutshe, South Africa, and from there the parents moved to Tabanchu. From there they moved to Mafikeng and then to the Barolong Farms in order to teach people agriculture. It was in fact his grandfather who was invited by the chief to come to Barolong Farms in Botswana to teach people how to plough their gardens and grow crops more efficiently.

The Matsheng family also settled in Vryburg before moving to Mafikeng. They settled at Borobadilepe in 1928. In 1947, the father got a job with the railways in South Africa where he started to work in Mafikeng. Shadrack Matsheng went to school towards the end of 1948. Although it was towards the end of the academic year, he was accepted as a student. Fortunately enough for young Matsheng, his mother gave him lessons at home long before he went to school. Because of this teaching, he did his primary School from 1948 to 1954 and skipped many classes.

In 1955, he went to St. Teresa’s Minor Seminary in Roma, Lesotho. There he received a Junior Certificate and a Joint Matriculation Board Certificate. He finished these studies in 1960. Then he went to the Oblates of Mary Immaculate Novitiate at Qutehing in Lesotho where he stayed for one year. In 1962, he went to St. Augustine Major Seminary at Roma for studies in philosophy through Pius XII University College that awarded degrees from the University of South Africa (UNISA). Young Matsheng completed his degree studies in 1965 and obtained a BA certificate from the University of South Africa.

In April 1966, he returned to Botswana and joined the Public Service just before independence. He had married Pauline Matsheng on 11th March 1966. He was appointed to Serowe as a District Officer. Towards the end of the year, he was transferred to Gaborone to serve as Commissioner of Community Development. He was the first local head of this department. From there he was transferred to the Office of the President in 1970 where he served as Assistant Director of Personnel. In 1976, he moved to the Ministry of Mineral Resources and Water Affairs where he served as Under Secretary until 1977. In 1977, he moved to the Institute of Development Management where he served as the first local lecturer until 1985.

According to Matsheng, these were wonderful formative years. In 1985, he joined the University of Botswana as lecturer in the Department of Political Science and Public Administration where he worked for a long time. In 1980-82, he went to the University of Victoria, British Colombia in Canada where he obtained a Master of Public Administration (MPA). Matsheng, though a Roman Catholic, developed an ecumenical spirit from an early age. Because of his background and because of the favorable atmosphere created by Vatican II, he began to participate actively in ecumenical matters with Bishop Urban Murphy. He was ordained in 1981. Matsheng has never had any problems associating with members of other churches. As soon as he came to Gaborone, he began to associate himself with the Botswana Christian Council. He considered that his association with other churches was part of his spiritual growth and development. At home, his family never ceased to follow the Methodist and Roman Catholic Church traditions in terms of prayer and other devotional practices.

In 1983, Matsheng was elected President of the Botswana Christian Council and served the Council very well until 1995 when Rev. Felix Mokobi succeeded him. During his presidency, the Council was plagued with a number of challenges. In the first place, the country was faced with an influx of refugees. Matsheng headed the Council at the time when the struggle in South Africa was becoming hotter than ever before. As a result, a number of refugees streamed into Botswana. The more refugees came into Botswana the more dangerous it became for the Batswana. The refugees came from South Africa and from Rhodesia (now Zimbabwe). This put Botswana at risk of being attacked by these two countries. In addition, the influx of refugees created serious challenges for the churches, such as the danger of famine. As President of the Council, Matsheng had to travel extensively to talk to many churches to ask for support for the refugees. According to Matsheng, things were very tough at Dukwi Refugee Camp as well as at Mogoditshane.

One of the concerns that preoccupied Matsheng was the need to encourage the church to be self-sufficient. This is because, as the struggle heated up in Mozambique, Angola, Namibia, and South Africa, overseas donor communities began to withdraw their financial support, arguing that Botswana was economically better off than other countries in the region. The international community stopped making donations to the Botswana Christian Council and began to concentrate on assisting other countries in and around the region. It was at this time that the BCC began to tell the churches they needed to be self-sufficient and self-reliant. They began to make efforts to be economically viable. This led to the building of Kopanyo House. It was necessary to teach church members to give generously in order to be self-supporting instead of looking for help from outside. This battle was never won because of the wrong teaching that the Batswana received from the missionaries. The Batswana only learned how to receive but not how to give.

One of the most contentious issues that faced the Council during Matsheng’s presidency was the abortion bill. Within the BCC, there were two positions. One that allowed it and the other that was completely opposed to it. All the major churches were behind the Catholic position, which rejected abortion as being murder. This was finally the position that the BCC adopted. The position of the churches, with the BCC at the helm, was that abortion was ethically unacceptable and therefore should be rejected outright. This position angered some members of government. There was no compromise on the side of the BCC. This struggle showed the government that the churches are a power to be reckoned with.

The most important issue that Matsheng grappled with during his presidency was the financial position of the Council. This was a very challenging issue. The ideas crystallized after a long heated debate in the Council that resulted in the agreement to build Kopanyo House as a self-supporting venture in order to finance the projects of the Council. This was a matter of survival for the Council. At this time, the donors had indicated that they were not prepared to pay the salaries of members of staff. The argument was that the donors would be prepared only to pay for the projects.

Matsheng felt that he contributed significantly to the life and work of the Council in a sense that he acted as a bridge person in terms of enhancing good working relationships among the churches. As a Catholic leading the Council, he worked tirelessly as a link or a bridge between the member churches and even a few indigenous churches that saw him accepting them wholeheartedly as churches in their own right. Matsheng promoted mutual acceptance among the churches and struggled hard to eliminate suspicion and fear among the churches. His presence as a Catholic on the Council and as President sent positive signals to other churches to accept each other as equals before the Lord. However, as president of the BCC, he felt that the Council failed to bring the Evangelical Lutheran Church of Southern Africa and the Evangelical Lutheran Church of Botswana together in an organic unit. Unfortunately, the attempts to bring the two churches together failed dismally. There is hope that God himself will bring the two churches together into one.

This biography, received in 2018, was written by Dr. James Amanze, General Secretary of the Association of Theological Institutions in Southern and Central Africa (ATISCA), Professor in the Department of Theology and Religious Studies at the University of Botswana (Gaborone), and DACB Advisory Council member. These stories were written as part of a collection documenting the history of the ecumenical movement in Botswana, an unpublished manuscript entitled “Heroes and Heroines of the Ecumenical Movement in Botswana: Celebrating Great Lives, Celebrating Past Leadership.