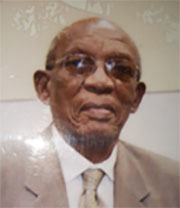 In Botswana the ecumenical movement was only possible because of the initiative and determination of some very committed Christians. One of these was Cuthbert Alban Ramasodi Motsepe. He is remembered in Botswana as one of the main figures who contributed tremendously towards the formation of the Botswana Christian Council (BCC). He was the first chairman of the Council that was established on 21st May 1966. He played a major role in the origins and development of the ecumenical movement in Botswana, in general, and in the Botswana Christian Council, in particular. In fact, he was the founding member of the BCC and its chairman for the first 14 years of its existence in the country.

Motsepe was born in Pretoria on 20th January 1920 to a typical Anglican family and died on 14th December 2008. His father was Joseph Tlhopane Motsepe and his mother was Stephina Motsepe. He was born in a family of two sisters and four bothers. Motsepe’s father had an interesting life span. He worked in the Cape and was a strong member of the Anglican Church. He lived in Grahamstown and attended the cathedral services there. When he returned home, he decided to introduce the Anglican Church to the village but he faced many problems because the chief there did not want to hear anything about Christianity. However, because his father was a member of the royal family he was given a chance to start a branch of the Anglican Church there. He was told that everybody who embraced Christianity would have to leave the village and live outside the village. But as his father was a member of the royal family and was not supposed to live outside the village, he was allowed to remain within the village. The village was called Makau in South Africa, in Pretoria District. His father lived to a ripe old age and his mother lived to the age of 101.

Motsepe did his primary education in Pretoria and his secondary education from 1934 to 1939 at Khaiso Secondary School in Pietersburg. From 1940 to 1941, he attended the Diocesan Training College in Pietersburg where he obtained a Primary Higher Teachers’ Certificate. In 1943, he proceeded to Fort Hare University College for his university education. He completed his degree in 1945, obtaining a B.A. degree and a diploma in education. He was a contemporary of Sir Seretse Khama, Dr. G. Chiepe, and Mr. T. J. Molefhe. In October 1949, Motsepe married Margaret Maimane, daughter of Rev. H. Maimane, an Anglican priest. It was a happy marriage.

After completing his university education, he joined the teaching profession. He taught at Khaiso Secondary School, Pietersburg (1946-50), Hofmeyr High School, Pretoria (1951-52), Walmansthal School, Pretoria (1952-4), Mamelodi Senior Model School (1954-1955), Mamelodi High School (1955-63), St. Joseph’s College (Botswana) (1963-1967), and Gaborone Secondary School (1968-1972). In many of these schools, he served in different capacities up to the ranks of principal and headmaster. From 1972 to 1982, he served as Chief Education Officer responsible for Secondary Education in Botswana and later served as Deputy Permanent Secretary. He retired in 1982 and joined the private sector where he built Progress House and opened Jay Tee Butcher. In 1985, he opened Shoe Fix workshops.

Motsepe arrived in Lobatse early in 1963 because of political pressure in South Africa and attended Anglican services there. Later, in 1963, he moved to Gaborone and attended Anglican services in the village. At this time, the Anglican community in Gaborone was very small. As a member of the Anglican Church, he was invited to attend a special meeting of church representatives whose objective was to discuss how churches in Botswana could work together as the body of Christ. The meeting was held on 21st May 1966, a date that marked the inauguration of the Botswana Christian Council. At the meeting, he was elected vice-chairman while Rev. Broomfield was elected chairman of the Council. The chairman, however, was not able to hold his position for a long time because he had to travel overseas. Consequently, Motsepe was asked to serve as chairman of the Council, a position he held for a very long time.

During his time as chairman, the Council grappled with a number of issues. In the first place, they strove for ecumenism because they wanted the churches in Botswana to accept one another as churches without conflict or discrimination based on doctrinal differences. The Council had the desire to see church ministers exchange pulpits as one way of fostering dialogue and coming together as churches to create a sense of unity among Christians in the country. The idea was for the church ministers to exchange pulpits on Sundays—something that help them to accept one another as ministers in the church of God. There were some occasions when the different churches came together—for example, the opening of the Annual Assembly where the representatives held a combined worship. The Council was also engaged in the social activities. This resulted in the creation of the Christian Service Committee in Francistown. This committee was responsible for organizing socio-economic development projects of the Council in conjunction with churches and community members.

Apart from this, the Council was also concerned with the plight of refugees. After the drought relief program came to an end the Council turned its attention to assisting people who had been displaced from their countries in the region. A center for refugees was created in Francistown, which was headed by Mr. Richard Motshekwane. But eventually the refugees multiplied in numbers and depended on assistance from the World Council of Churches that was administered by the BCC. Eventually the refugees themselves, who did not help the situation, overwhelmed the BCC. For example, when the money was not available they complained that the officers of the BCC were using the money for their own needs and not giving it to the refugees. One of the refugees took the Council to court in Francistown and forced the officers of the Council to appear in court in Francistown. As a result of these hardships, the Council asked the Government of Botswana to form a Council for Refugees with a government chairman. This is how the BCR was formed. Before the formation of the BCR, the government of Botswana did not want to have anything to do with refugees in the country for fear that it would antagonize the South African government and that the Boers would invade the country. Consequently, the government of Botswana was extremely cautious about not coming into conflict with the South African government and decided to distance itself from the refugee problem. Once the BCR formed, the government of Botswana began to play an active role in relieving the suffering of the refugees.

Motsepe’s role in the life and work of the Council was very significant indeed. The fact that he was a layperson helped the Council to identify with everyone, both laity and clergy. Had he been a church minister, it is likely that the Council would have been identified with a particular church. This would have prevented a number of churches from seeking membership in the council. Motsepe also helped the Council to realize the fact that the church was not called only to serve the spiritual needs of people but also their material needs. This thinking enabled the Council to engage in developmental projects that enhanced the socio-economic development of the Batswana as a people. His vision and dynamic leadership as chairman of the Council led to the formation of the Christian Service Committee after his successful visit to Malawi and Kenya where similar committees existed.