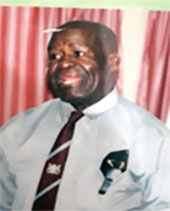 The ecumenical movement in Botswana owes a great deal to Rev. Harsh Ramolefhe. He was born in Shoshong in 1921 and died on 4th May 2004. He attended primary education in Shoshong and did his Junior Certificate of Education by correspondence in Johannesburg. In 1946, he joined the army as a soldier. He was sent to the Middle East where he spent much of his time in Alexandria, Egypt as a sergeant. During his stay there, he embarked on a ministerial course under Rev. Griffith. In 1949, he returned to Botswana. In 1950, the London Missionary Society wanted him to be trained as a pastor. Everything was arranged for him to go to Tiger Kloof for ministerial training. In January 1951, when he was supposed to leave the country, his matriculation was rejected because he indicated in the forms that he was not married. The college said that they could not take him because there was no accommodation for bachelors. After long discussions, it was agreed that he should be sent to the London Missionary Society Bechuanaland Bible School at Kanye to do an evangelistic course. It was also suggested that while there he could look for a wife. That was done. While he was doing his studies at Kanye, the church did what they could to help him find a wife. This task was given to the Deacon’s Committee directed by the Missionary Council. After a long search the Deacon’s Committee managed to identify a wife for Ramolefhe. Her name was Segomotso Moirapula.

During his studies, Ramolefhe was under the tutorship of Rev. Alexander Sandland and Rev. Kefhetoge Petso. He completed his ministerial studies in 1952. Afterwards he was first sent to Palapye to be a minister there. By this time, he was engaged. He got married on 15th February 1956 in Palapye. He ministered in Palapye from 1952 to 1962. In 1962, the LMS celebrated its centenary. During the preparations for this great event, the LMS was looking for someone to be a coordinator. Consequently, Ramolefhe was asked to move to Shoshong to coordinate the events of the centenary that year.

In 1963, an unexpected event prevented him from going back to his church in Palapye. There was wide spread rumor that the Bechuanaland Protectorate was going to attain independence. The Bechuanaland government decided to launch a census in Botswana for the whole country. Ramolefhe was asked to participate in the census after he underwent a course in Mafikeng. In 1964, he was one of the people who travelled throughout the country counting people in the Protectorate. He was Census Supervisor. In that work, he was under Erick Campbell. This was the first census in Botswana leading up to independence.

When Ramolefhe began to work for the Bible Society in 1969, he faced great difficulties. The work needed an ecumenical approach and yet, at this point, the churches hated one another. This is because some churches claimed to be the true churches and did not want to know about the so-called Zionist Churches. Upon joining the Bible Society, one of the first things that Ramolefhe did was to form a Bible Society Committee. As soon as he took office he began to move from church to church telling people about the Bible Society. However, he faced a great deal of resistance from a number of churches. According to Harsh Ramolefhe, the churches that resisted most were the Roman Catholic Church, the Zion Christian Church, the Seventh Day Adventists, and the United Congregational Church of Southern Africa (UCCSA). Many churches were eager to participate in the work of the Bible Society but they were reluctant to meet people from other churches.

On 30th August 1969, the Batswana celebrated the official opening of the BSB building. Many dignitaries and government officials attended the opening ceremony. It was officially opened by Sir Seretse Khama, the first President of the Republic of Botswana. In his speech, Sir Seretse Khama asked the Batswana to celebrate “Bible Sunday” every year from that day forward on the last Sunday of August each year throughout Botswana. In 1992, the Lutheran Church donated a large amount of money for Bible translation in Botswana. At that time, the church was headed by Bishop J. P. Robinson. The Committee agreed that Ramolefhe, the General Secretary, should be given the authority to determine which local language translation the Bible Society should prioritize. The Executive Committee agreed that the Bible should be translated into Ikalanga. It is important to note that, in those days, it was difficult politically to speak about any other language in the country apart from Setswana and English. Ramolefhe and his committee went to the President to make a strong appeal to translate the Bible into Ikalanga. After a long discussion with the government it was finally agreed that that authority should be given to the Bible Society to translate the Bible into any language in Botswana. It was also agreed that the copyright should be endorsed by the Secretary of the Bible Society in Botswana.

The new Bible was a positive achievement for several reasons. First, it has section headings. Secondly, it is printed in big letters, making it readable. Thirdly, it has also references. Fourthly, the new spelling system is better than the old one. This Bible is now being used in all the churches of Botswana. The new revised translation came out in 1992.

These are some of Ramolefhe’s achievements during his time as General Secretary of the BSB. It should be noted that before the revision took place, there was one Bible being used in some schools. It was known as the Central Tswana Bible since it was translated in South Africa by Rev. Bramahoof who was a member of the Dutch Reformed Church. Some members of the BSB wanted people to use this Bible because it used a new orthography. It was as good as Baebele ee Boitshepo. But Ramolefhe refused to use this Bible because it did not have good Setswana. The translation mixed Pedi and Setswana words. Ramolefhe insisted that the Bible should be rendered in pure Setswana. It was therefore agreed that the Central Tswana Bible could be used in churches but not in schools.

Apart from promoting the work of the Bible Society, Ramolefhe was also instrumental in the formation of Minister Fraternals. This was not easy to do because there was a great deal of resistance from different churches. But having seen what Ramolefhe had done in the Bible Society, a number of ministers began to come forward to form Minister Fraternals. The first chairman of the Minister Fraternals was Bishop Maimela of the Church of God in Christ. This was done throughout the country. The primary objective of the Minister Fraternals was to unite all churches without reference to denominational divisions. It was hoped that this would enable Christians to work harmoniously as co-workers in God’s vineyard. The plan was that the Minister Fraternals would be the voice of the people to the government on matters affecting the life of all the Batswana. They would also be the voice of the people to the Botswana Christian Council, the umbrella ecumenical organization in the country.

When Ramolefhe was Secretary of the Bible Society, he was representing the BCC everywhere in the country. As he was a member of the BCC representing the BSB, he wanted the churches to become members of the Botswana Christian Council. Ramolefhe was chosen by the BCC to recruit churches to become members of the Council. It is interesting to note that in this venture, Ramolefhe was not alone. Two other people, namely Bishop P. J. Robinson (Lutheran) and Mr. Joseph Makgwa (Methodist) also had a strong ecumenical spirit. Ramolefhe, robinson, and Makgwa were instrumental in recruiting churches to become members of the Botswana Christian Council. As a result of their ecumenical zeal, they engaged themselves fully in the work of the BCC. Structurally, the BCC was part and parcel of the Bible Society of Botswana. The Secretary of the BCC was a member of the BSB and the Secretary of the BSB was a member of the BCC. The two organizations worked harmoniously together. For example, whenever Ramolefhe went around to talk about the Bible Society, he invited the General Secretary of the BCC to talk about the ecumenical movement in Botswana. According to Ramolefhe, there was no difference drawn between the work of the BSB and that of the BCC. In those days when prayers for rain were organized, the initiative came from the BCC. The BCC would first enter into consultation with government, after which the information would be relayed to the Minister Fraternals who would finally organize prayers at a kgotla or stadium.

During Harsh Ramolefhe tenure, the Bible was translated into the following languages: (a) Setswana (new othography), (b) Thimbukushu ( for the Angolan refugees) and (c) Ikalanga (ongoing-New Testament completed and Old Testament based in Francistown).

This presentation would be incomplete without noting that Ramolefhe contributed significantly towards liturgical development in the African Independent Churches. For example, he participated in the writing of the Kobamelo [worship liturgy] of the Spiritual Healing Church. It is a well known fact that the inter-spiritual churches have no books to use when conducting baptism, marriage, funerals and other religious ceremonies. It was in this context that Archbishop Israel Motswasele asked Ramolefhe to help them write a Kobamelo of their own. This was the first book to be produced and used by the inter-spiritual churches. It came to be known as Spiritual Healing Church Kobamelo. Ramolefhe was also asked to write a book for all the Spiritual Churches in Botswana. It came to be known as Kobamelo ya Dikereke tsa Tsemoya. The work was in the hands of the Mennonite Ministries. Ramolefhe wrote the introduction. As he was the head of the Bible Society, he was allowed to attend a number of church activities.

For twenty years, he was a member of Church Radio Council. He represented the BSB in the CRC. He was once chairman of the committee and continued to represent the UCCSA in the Church Radio Council until the time of his death. It is noteworthy that Ramolefhe, through his ecumenical activities, succeeded in breaking down the walls of hatred that kept the churches separated from one another and in confrontation with one another because of their doctrinal differences. Churches began to love one another, to live in harmony, and to work together as members of the family of God.