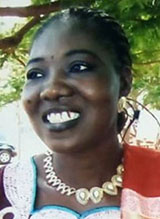 Cécile Massié Coulibaly (née Poda) could be described as a woman orchestra! She learned to sing, to dance and even to play the drum after her conversion. She became Mrs. Cécile Coulibaly following her marriage to Pastor Coulibaly Abdias, and she was committed throughout her life to the worship of her Lord and Savior Jesus Christ.

Cécile Poda was born in 1970 in Nioro-Nioro in the province of Poni, in the southwestern region of Burkina Faso; she was the youngest of a polygamous family of eight children. Her father was a garde de cercle, the equivalent of a policeman in Upper Volta, now Burkina Faso. Her mother was a housewife, preparing and selling dolo, a local beer made from red sorghum.

The young Cécile Poda accompanied her parents to their various postings, particularly in Mossi and Senoufo countries, before they retired to Bobo-Dioulasso. She expressed herself in the two main languages of the country, Mooré and Dioula, in addition to Lobiri, her mother tongue.

From elementary school to apprenticeship, Poda Cécile did not have the chance to go further in school; she stopped at first grade. However, she later attended evening classes to obtain her primary school certificate. She then attended decentralized Bible classes to deepen her biblical knowledge and build up her budding faith. In addition, she started to learn the weaving, knitting, and sewing techniques that would help her in her future endeavors.

Cécile’s parents were Catholic, but they also kept their foot in the door of traditional religious practices. Because her parents were always busy with their work, Cécile and her siblings did not receive the parental affection that every child needs. This situation led Cécile to move in with her uncle, Michel Poda, who was an evangelical Christian. It was in this family that Cécile met the Lord, an encounter that transformed her life.

She was baptized in the Christian Alliance Church in Sarfalao. It was in this church that Cécile learned everything: choral singing, solo singing, musical instruments, etc. She caught the attention of a choir director named Michel Drabo who introduced her to Mande vocal techniques and rhythms of the balafon and the djembe. In this genre, Cécile became successful. The leaders of the Maranatha Institute noticed her musical gifts. They also hired her as a nanny for the students of the Institute.

The young pastor Abdias Coulibaly, who had just been appointed pastor of the Evangelical Mennonite Church in Orodara, was looking for a soulmate with whom to enter full-time pastoral ministry. At the time, Cécile was working at the Maranatha Institute as a baby-sitter, while taking classes herself. It was there that her future husband, in search of a perfect match, noticed her.

The engagement process was handled by carefully selected and trusted people. In such a situation, it is necessary to negotiate the agreement of the parents even if they are not Christians. It is a time for advice, and the future bride and groom did not deprive themselves of it! After all these consultations, the various agreements were obtained to celebrate the marriage on May 5, 1994.

The beginnings of the Coulibalys’ ministry

The early dates of the pastoral couple’s ministry were not easy: a church of about ten members with no fixed income was a trial and a challenge to overcome. The pastoral couple had to work part-time to make ends meet. Pastor Coulibaly worked in a bookstore while providing pastoral care. During this time, Cécile carried out income-generating activities to support the family and especially to ensure the reception of the guests who came to see the pastor. There were moments of doubt, but the couple stood firm, relying on the Lord.

It was at this point that Mrs. Coulibaly began to hold numerous rehearsals, singing songs of praise to the Lord with some of the women who attended the church. As the group of women sang and danced in honor of the Lord, the other women were inspired to join in. Her husband was encouraged by such a commitment from his wife and became more involved himself. Their ministry took off.

Mrs. Coulibaly was known for the quality of her voice, the dexterity of her dance steps in honor of the Lord, and her industriousness. She made and sold handicrafts, as well as juices and cakes made from local agricultural products. She set up a business selling cloth to both poor and wealthy women, which was a real success.

But there was a problem. Mrs. Coulibaly still had no children after twenty years of marriage! In Burkinabè society, such a situation could provoke a divorce. But the couple chose to remain faithful to the Lord despite everything. This is an example of extraordinary fidelity, especially for Cécile whose husband was a pastor.

The Death of Cécile Coulibaly

When Cécile Coulibaly left her house on that fateful day of September 24, 2021, she did not know that she would never return to this home, which she had worked hard to build together with her husband in Sector 6 of the city of Orodara. Mrs. Coulibaly had gone to the church that day to rehearse the songs for the next Sunday’s worship service.

According to Mrs. Awa Traoré, one of Mrs. Coulibaly’s lieutenants, the rehearsal ended around 5:00 p.m. and she was about to go home when the tragedy occurred. When she started her motorcycle, she fell and lost consciousness. She was immediately taken from the church to the hospital in Orodara, only about four hundred meters away, but it was too late! The chronic asthma from which she had been suffered for a long time had unexpectedly taken its toll on her.

The death of Mrs. Coulibaly sent shock waves through the Mennonite churches of Kénédougou and also through all the evangelical churches in Orodara. From the church to the hospital, via the morgue, then back to the church, a dense crowd followed the funeral procession to the church for the wake.

Cécile Coulibaly was buried on Saturday, September 25, 2021 after a tribute was paid to her by the church of Christ in the presence of a crowd of witnesses from all over Burkina Faso and Mali.

The Heritage of Cécile Coulibaly

In such a situation, it is difficult for people to speak; sobs and tears are the first expressions of their deep sorrow. But a few days later, testimonies about Cécile Coulibaly’s life and death poured in from everywhere: from the women in the Evangelical Mennonite Church, and from other evangelical churches in the city of Orodara and surrounding areas.

For her husband, Pastor Coulibaly, Cécile was a woman of faith and commitment, a trustworthy woman who was able to manage the modest financial resources of the household. Some described Cécile as a hard-working woman. She always told the truth, did not hold grudges and was ready to ask for forgiveness. She was not easily discouraged in the face of adversity. Others emphasized that she was generous and sympathetic to the problems of those around her. Business partners found Cécile to be a loyal customer who paid her bills on time. So was Cécile Coulibaly an angel in human form? No, of course not! The pastor himself answered this question: “When Cécile gets angry, you have to use appropriate techniques to calm her down. She often lacks patience!”

In conclusion, the life and death of Mrs. Cécile Coulibaly leaves a posthumous legacy of enthusiasm for the Lord’s work, generosity in action and faithfulness in times of trial. This Amazon of faith has taken flight to be her Lord, who rewards the faith placed in him.

This article, received in 2022, is the product of research by Paul Ouédraogo, Master’s student at the Université chrétienne LOGOS de Ouagadougou in Burkina Faso, under the supervision of Dr. Anicka Fast. 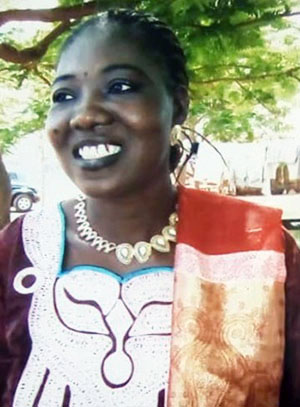 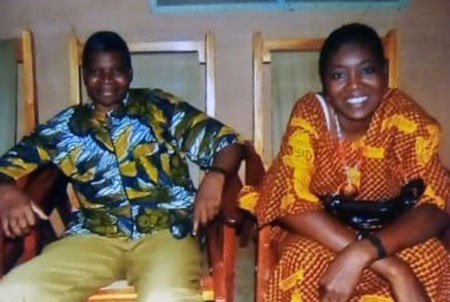 [2] Cécile Coulibaly with her husband Abdias Coulibaly around 2007.