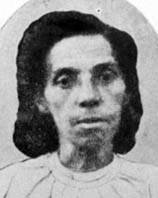 Maria José Azevedo served the Lord on Brava Island for twenty-two years. She gave herself full time to the work without outside financial support.

As she had trained to become a teacher, Marie Azevedo started a school. Then, with the children, she travelled from village to village, starting Sunday Schools. From these beginnings, a children’s revival began and it lasted for several years. The children held their own meetings. There were very few copies of the Bible available and there was no other Christian literature. So the children would write out Bible verses for one another to memorize. Some of them learned the entire Gospel of Luke and other books of the Bible. Some children who did not have proper clothing to come to church were reached for the Lord in these meetings.

When Mrs. Adelina Domingues of New Bedford, Massachusetts, heard that her old friend Maria Azevedo was working with very few Bibles and no hymnbooks or Sunday School materials of any kind, she raised one hundred dollars one Sunday to send Bibles and New Testaments to Brava.

Marie earned money to support her family by sewing and making lace but spent much of it on starving children. She would give a little soup or some other nourishment to as many children as she could, just to keep them alive. She would take in as many poor folks as her house would hold. Once, while she was evangelizing, a government official was converted by seeing her fearlessness in preaching the gospel.

For five years in the early 1930s, she bore almost the entire burden of the church herself. Pastor Dias was ill, people were discouraged, the church in the U.S.A. seemed about to withdraw support and the mission was about to close. Marie did the preaching, took care of pastoral duties and performed as many extra services as her time and strength would permit. Finally, the missionaries, Rev. and Mrs. Everette Howard, arrived in 1936. Pastor Dias and his wife left two years later to retire in the U.S.A. where their children had settled.

Maria Azevedo was ill for several years but continued her work faithfully until she passed away in Praia on April 19, 1949.[1]