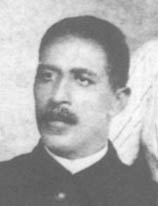 Pastor João José Dias was the pioneer Nazarene minister in the Cape Verde Islands, from the island of Brava. From boyhood he was taught that the Roman Catholic Church was the only true church and only through it could heaven be reached; Protestants were heretics and emissaries of the devil. He knew nothing of Jesus as Saviour or of the Bible. Even as a boy, he saw the hollowness and mockery of this system. He was not satisfied and longed for something better. He sought for an unknown God.

His father was captain of a sailing vessel, and at sixteen years of age João took to the sea and followed his father to the U.S.A. He went to New Bedford, Massachusetts, where there was a large Portuguese community. He found bad friends who led him into an evil lifestyle.

Two years after arriving there he was invited to a Protestant mission. He went out of curiosity and received a cordial welcome that broke down his prejudices. His friends denounced him for attending a Protestant service. In spite of this, he began attending regularly, listened carefully and watched the way the Christians lived. As a result, one day he found the Lord and salvation.

A year later he heard about the baptism with the Holy Spirit. At a mission in Providence, Rhode Island, João made a complete surrender of his life to God and found the inner assurance of full cleansing from sinfulness. Immediately he felt the urge to carry this gospel back to his home islands. He had taken about four years of elementary education and learned English on his own.

João began to testify, mainly among his own people. Some found salvation, including his own father, and several young men were fully sanctified. For several years he was intensively involved in the work of the Lord. Then the Association of Pentecostal Churches of America (merged with the Church of the Nazarene in 1907) sent him to Cape Verde with the promise to support him with a small stipend.

Together with a few converts he embarked on a sailing vessel for Cape Verde in February 190l. The ship sprang a leak and they pumped out water for sixteen days. Their situation seemed hopeless. However they did arrive safely at San Miguel in the Azores. Soon after arriving home in Brava he married Miss Joana Lomba (1882-1968). She had been converted at the age of fifteen in Cape Verde.[1]

Dias travelled from town to town telling the story of the love of God. A faithful band of helpers rallied around him. The persecution was fierce. The year he arrived he reported:

A large mob circled our mission and made so much noise that it was impossible to continue the service. The multitude was furious and we feared they would kill us with clubs, stones and knives. Twice we called for help from the Chief of Police. It was almost impossible to restrain the five hundred or more attackers.[2]

Dias was called a devil who held conferences with Satan under his bed. It was reported that he would ride on a white horse into the fields and receive money from the devil to pay converts. Even his own family spread such rumors. He was forbidden to hold meetings and was twice attacked by frenzied mobs who stoned and roughly handled him. Once he was beaten until unconscious and left for dead. His followers were molested, subjected to indignities, and whipped. Some were left crippled for life.[3]

On four occasions he was imprisoned and appeared before a vindictive court. In prison he praised God and sang until passersby were amazed. One of his companions in prison translated the chorus “Happy on the Way” that continued to be a great favourite in the Cape Verde Church. One long-term prison sentence of mission workers was ended by a general amnesty in honour of the deceased Queen Victoria of England. Dias always resumed his evangelism and continued to demonstrate the life and spirit of Christ.

In 1918 Padre Pedro, the priest on Brava, planned to drive every Protestant from the island. He became involved however in trouble between a man and wife in the parish. This infuriated the populace, and his own congregation turned against him and he left. Before departing he admitted that the Protestants were not as dangerous as he had made them out to be. Dias wrote to him to try to help him spiritually.[4] Prejudices gradually began to melt. In 1923 he reported, “I am suffering some persecution but will stand the storm till Jesus comes. Please pray for me.”[5]

God blessed their ministry and by 1916 there were 87 members in the Brava congregation. With help from America, a sanctuary that would seat two hundred was built. The mayor and even priests sometimes attended. A mission was established on São Vicente in 1931 and the Dias family spent their last two years there before retirement. There were also Nazarene Christians on Santo Antão. Dias’ health was beginning to fail and he appealed for missionaries to come.[6]

In 1938, after the missionaries, Everette and Garnet Howard, had arrived in 1936, Pastor João and Mrs. Joana Dias retired to the U.S.A. where their children had settled.[7]