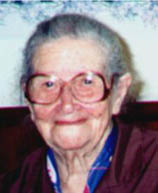 Adelina Domingues lived on Brava, one of the smallest and most often drought-stricken islands in the Cape Verde. The day Adelina was born her father, a young harbor pilot, was out bringing a schooner into the harbor at Furna. The captain of the schooner was a boyhood friend of his from a little village in Italy where they had spent their childhood. Arriving home that day the captain placed an expensive gold earring in the baby girl’s left hand while her father folded her right hand around the gold coin he had just earned. The captain made a wish that when Adelina grew up she would be as pure as gold. Neither of them knew how to pray but that wish was to have a tremendous impact on her life as she grew older. Her mother often told her the story and as a girl she determined to do her best to fulfill that wish. Her earliest memory was riding at age four in a horse and buggy with her father down to the seaside in Cape Verde.

All the residents on Brava were Roman Catholic in those days and the priests controlled them with the threat of an extended time in purgatory. Adelina lived as clean a life as she knew how and was very religious. However, the rituals and ceremonies did not satisfy her hunger for real meaning in life and worship. As a teenager, she would crawl under the low-hanging branches of a coffee tree in the valley and pray, “God, my mother tells me that you are in heaven, but that you are in the earth too. Would you send an angel and tell me what to do so I can be forgiven and not have to go to purgatory?” The angel never came.

When she was eighteen, it was arranged for her to marry Mr. José Manuel Domingues. He was the son of well-to-do parents and as a boy had run away from home to become a mess-boy on a whaler. At a stopover in Florida, some young ladies from Bethel Mission gave José a Portuguese Bible. A few weeks later at Providence, Rhode Island, he met three young Cape Verdians who invited him to church. There, at the South Providence Church of the Nazarene, he heard the story of salvation for the first time and became a follower of the Lord Jesus Christ. When the four boys returned home the families of the other three responded favourably to their testimonies, but not José’s family.

José’s family were fanatical Roman Catholics and angrily rejected his testimony of salvation and began persecuting him to destroy his new faith. The men held him down and poured whiskey on his head and into his mouth but were unable to get him drunk. He became active in supporting João Dias in the beginnings of the Church of the Nazarene in Cape Verde. Then his family tried providing him with plenty of money and access to many girls of questionable morality. This he was unable to resist and he began a lifetime habit of sexual promiscuity that marriage did not change.

A few days after their wedding in 1906, José left for the United States as captain of a small schooner. He had watched the superstitious zeal of his wife as she devoutly carried out her religious duties as a faithful Catholic. One day he told her, “I would be sorry if I should die in the condition I am in and go to hell and find you in hell too, with all your sincerity and desire of religion, yet without salvation.” Before leaving on the voyage he told her about the way of salvation and brought the Bible from his parents’ home. They had hidden it when they had taken it from him seven years earlier. He admonished her to read it and discover the true way.

Next morning she climbed high up on the mountain to watch her husband’s ship sail away. That night, after everyone had gone to sleep she picked up the Bible. Trembling with fear, she opened the forbidden book and read the story of Nicodemus. Then she began to pray. Suddenly something happened, “I felt a joy I cannot express! I fell down on my knees on the bed and started to talk with God, ‘You have come into my heart,’ I prayed, ‘I am going to start a new life.’” Sometime past midnight she asked, “Lord, what do you want me to do?” She heard the answer, “I want you to carry my name to the poorest people, to love them for me, this is your lifetime job.” All alone and under the guidance of the Holy Spirit, she not only found salvation but was also entirely sanctified.[1]

She emigrated with her husband in 1907 and he worked as a fisherman in New Bedford, Massachusetts. Some years later she started out one Sunday morning to find a church. She asked a man on a street corner, “Where is a good church, people who enjoy their religion?” She was directed to a small Church of the Nazarene a few blocks away. She soon became a vital part of that congregation and later organized a mission among Cape Verdians. The work she fostered became the best church in the New England district. She worked in a factory so as to be able to send Bibles, food and clothing back to Brava. With her fiery, passionate exhortations she was a wonderful preacher and great crowds would come to hear her.

She prayed for the conversion of her husband throughout his life. Mr. Domingues became desperately sick and in hospital he became repentant. Three weeks before he died, in 1950, he found his way back to the Saviour of his youth. His tribute to his wife was, “I’ve never met anyone with so much love.”[2]

Adelina visited Brava in 1953 and travelled with the missionaries, Rev. Earl and Mrs. Gladys Mosteller, and workers by sailboat and on donkeys. Everywhere she testified people responded and found the Lord. Earl Mosteller reported that one morning they were stunned when one of the main pastors came and said he was quitting. He had been greatly tried and felt he was the victim of injustice. They called Adelina Domingues to pray with him. She began to tell him how Christ had suffered. “With tears flowing down her cheeks and her voice rising in a crescendo of pathos we were feeling a little of the suffering Christ. As a direct result of her prayer the pastor returned to his assignment. He went on to serve some of the largest Cape Verdian churches and became one of the most effective district superintendents on the district.”

She ministered at Cova de Joanna on Brava. It was reported that “for two months she visited, prayed, exhorted, testified, warned, and wept until every tavern in the village closed and dance halls stopped functioning. The musicians were all converted.” Mrs. Adelina Domingues donated a house to serve as a meeting place for the new congregation. She gave her family property in Cape Verde to the Church of the Nazarene there.

According to family sources, Adelina Domingues lived in her own home until she was 107 and often prepared Sunday dinner for guests. She outlived not only her husband but also her four children. She was a seamstress. Murphy, her grandson, said, “If she wasn’t sewing and doing things to help other people she was reading the Bible and in prayer.”

On February 19, 1998, Adelina turned 110 years of age. Her hearing had failed and her memory was not always too good. Miss Vivian Sloan visited her regularly, and her nearest living relatives visited as often as they could. When she was 113 years old in October 2001, her daughter in law, Rosalie Domingues, and her mother, Rosemary Swanson, together with the girls, Tiffany and Annalesa, visited Adelina on Sundays. A friend, Vivian Sloan, kept in touch with her regularly. Adelina said that she was waiting for the Lord to come back and they would all be taken up.[3] She attributed her longevity, in part, to her strong faith. She had lived at Brighton Place nursing home in Spring Valley, California since 1996.

Adelina died in her sleep on August 23, 2002, at the age of 114, the oldest living American. That was her “coronation” day. Her birth on February l9, 1888, had been verified by the Consulate of Cape Verde in Boston. The family had always thought that she was a year older.[4] She was certified by researches of the Guinness Book of Records to be the oldest person in the United States and the second oldest in the world. A Japanese woman five months her senior was considered to be the oldest. Adelina’s survivors included six grandchildren and nine great-grandchildren.[5]