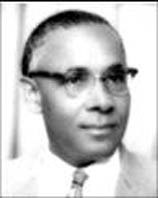 Pastor António “Tec” Gomes de Jesus was born on Brava and was the first Cape Verdian after Pastor João Dias to enter the full-time ministry. His wife was Gregória (1907-1992) and they had nine children. António was born on Brava and he first heard the gospel preached by João Dias in 1924. In 1929 he was converted in São Vicente when a Lisbon evangelist, Rev. José Ilídio Freire, visited the island.[1]

António ran a popular barber shop. Immediately he destroyed the stocks of wines and liquor and began selling Bibles and New Testaments instead. He started mission services in the home of a friend.[2] People in Mindelo City would smilingly tell of the first time he testified. In his barber shop he bowed over a man, holding a razor-sharp knife on his neck and slowly asked, “Are you sure about the salvation of your soul?” The man gave him his full attention, wondering about the barber’s intentions. António then told him how he met Jesus as Saviour.

In 1933 they pioneered work on Santo Antão and made benches from the wood of a broken ship.[3] Gomes bought a farm from the sale of his barber shop and at first walked eight miles to visit and hold services in Porto Novo. After hearing persistent stories in the market places about a miracle book or “Book of Saints”, he, together with the missionaries, Rev. Everette and Mrs. Garnet Howard, set out to look for it. After a difficult journey over the high volcanic mountains on muleback, they found the “Good Man” with the book. No one knew how it had come to the valley of Garca. A man began reading it and it touched his heart. He called his neighbors to come in the evenings around his doorstep while he read to them. It became a custom that on every night of the full moon the people would gather and he would read from it.

The old man invited the mission party to stay as it was full moon that night and told them:

Friends, you should read that book–it would help you he told them. You know Senhor, since we have been reading this Book we have learned something. We have found out that we can confess our sins to God. We don’t have to pay a man and confess to him. Why, you can confess your sins right out of your own heart to God and He will forgive you. I know, for one day we got to talking about it and we tried it, and God came into our hearts and we are now happy. We know that He has forgiven our sins.

He told how the priest had become angry because the people would no longer confess to him. One day he just disappeared over the mountains and was never heard of again.

António Gomes grabbed him excitedly and jumped around and around praising the Lord. He said, “We are people of God and we have brought you a new copy of that precious book, the Holy Bible.” The man was delighted with the gift and he introduced the visitors that evening as though they were from another planet. António preached a great gospel message. The visitors taught them some choruses and they quickly picked up the tunes on a guitar. The Holy Spirit had taught those people to pray; many were born again and some had been miraculously healed. They no longer went to the little chapel in the center of the village that was full of images. It was lying in ruins with the roof fallen in. There was no pastor to place there but it was arranged for the pastor from Povoacao to visit there about twice a year and hold services for the blessing and encouragement of those people.[4]

When the pastor and his family first arrived at Maio the boat boys had been warned and threatened not to help them disembark. Pastor Gomes prayed at the anchor chain and God brought them a boat with which to land. A local priest brought him into court on false charges. In the end the judge and some of the leading families of the islands were won for the Lord. In 1950 he reported that Mr. Évora, the “king of Maio,” and his family were all good Nazarenes and were doing much for the Lord’s work on that island.[5] The Gomes’ son David had stubby little fingers that could scarcely hold a pencil. The priest had struck him because he refused to pray before the crucifix.[6]

Pastor “Atomic Bomb” Gomes always did things big. In 1956 he took a three week vacation from Praia to Porto Novo on Santo Antão, a place where there was no Church of the Nazarene. When he returned he reported seventy-six people converted and a church was started.[7]

Pastor António and Mrs. Gregória Gomes were pioneers and built monuments in the hearts of people. Although not highly educated they gave vital testimony of the Christian life. He was dynamic and very kind with a warmth in his messages. The Gomeses served on six of the nine islands, and twelve years after António’s death there were strong believers on all of these islands because of their ministry. Their daughter tells that, as a result of her parents pastoring on islands where there were no high schools, their eight children received only primary school education. They faced much persecution and their winning of so many Roman Catholics for Christ was a real miracle of grace.[8]