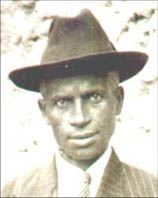 Pastor Jesuino Monteiro was called “The Little Religious Man.” A sailor and fisherman from the village of Bombardeiros on Fogo Island, he travelled to the U.S.A. by sailboat.

In 1919 he was one day attracted by a Salvation Army band on a street in New Bedford, Massachusetts. He stopped to hear the message.[1] Seventeen years later he testified about what happened, “I prayed the prayer asking God to forgive my sins. There came a peace into my heart and it is still there.” He learned some choruses and acquired a Bible. Two days later his ship sailed to return to Cape Verde.

Upon arrival back home Jesuino Monteiro began walking all over the island singing and telling of salvation and peace through Christ. People did not believe him and thought he was half crazy. They threw stones at him and persecuted him. Even his wife and family turned against him. For seventeen years he persevered and prayed continually for God to send missionaries to his people. On dark nights he would go to the black beach and call upon God.

From the age of seventeen he suffered from dropsy. As a result he could not work as a sailor and had to fish for a living. He was desperately poor and had to sell tiles from his roof and floorboards from his house to buy food.

When the missionaries, Rev. Everette and Mrs. Garnet Howard, came to Fogo (c.1938) they found an unusual welcome. Word went around that the religious people had arrived. The great response to the gospel message showed them that God had been working there.

Monteiro came running to meet them singing, “Happy on the Way (Glory to His Name)”. He was about four feet six inches tall, dark-skinned, with gray hair and he walked with a stoop. He wept with joy and thankfulness to God and would not let Everette Howard out of his sight. He hugged him and insisted on spreading his banana leaf mat by the missionary’s bedside to sleep. Howard once gave him a mule but he traded it for a large bag of meal. Another time the missionary gave him his best pair of shoes and Monteiro sold them to buy food.

One afternoon at a cottage prayer meeting in the little village of Mosteiros on Fogo, the believers felt led to call upon God to touch Monteiro’s body. Suddenly God healed him. Everette Howard wrote later (c. 1950) about it, “From that moment till now he has never had one touch of that dreaded disease.”[2] When the volcano erupted in 1951, his was one of the few houses in the village left standing.[3]

Mr. Jesuino Monteiro was able to attend the dedication service of the São Filipe church on Fogo in 1970 and rejoiced that there were now two full-time pastors on his island.[4]