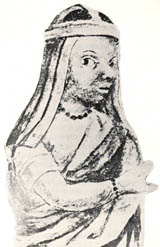 Kimpa Vita (circa 1685-July 2, 1706), whose baptized name was Dona Beatriz, founded a religious sect known as the Antonians. The goal of this movement was to restore the fortunes of the once glorious kingdom of Kongo and to Africanize Christianity.

After October 1665, when the Portuguese had defeated the Kongo army, the capital San Salvador was abandoned and the ruling dynasty was split by rivalry between the Ki-Mpanza and the Ki-Nlaza families. Members of these families ruled at three different locations, San Salvador, Bula, 100 km (60 mi) northwest of San Salvador, and Kibangu, south of San Salvador near Ambriz. Within the context of the political confusion and moral despair which gripped the kingdom in the late 1600s and early 1700s, several religious figures arose wishing to reunify the state and instill hope in the people.

The most important prophet was the young Kimpa Vita, or Dona Beatriz, who believed she had received a visitation from the popular Saint Anthony. According to Kimpa Vita, Saint Anthony became incarnate in her body so that she actually was the saint. Compelled by the Christian God to announce his word and to restore the former Kongo capital San Salvador, Kimpa Vita began preaching in the ruined city.

Rejecting missionary domination over Christianity, Kimpa Vita taught that Jesus Christ actually had been born in San Salvador which she called Bethlehem, that he had been baptized at Nzundi, about 150 km (100 mi) north of the capital, which she named Nazareth, and that Jesus Christ, the Holy Virgin Mary, and Saint Francis were black people of the Kongo. Furthermore, Kimpa Vita prophesied that God would punish the people if they did not immediately return to San Salvador. Initially most of the chiefs did not support her, but the common people, longing for unity and peace, joined the movement in great numbers. They believed that the Christian God was, at long last, responding to the plight of the Kongo kingdom and that he would provide great wealth for the inhabitants.

About the same time, Mpanzu Mvemba, or Pedro IV, who was the Mani Kibangu (ruler of Kibangu), gained recognition as Mani Kongo (ruler of the entire Kongo) and attempted to reunify the once powerful Kongo state. Thus, he sent his general Pedro Constantino with an army towards San Salvador to build villages and plant gardens in preparation for people to resettle the old capital. Hoping himself to gain control of a reunified Kongo, however, Constantino joined with Kimpa Vita against Pedro IV. Pedro IV, who did not want to lose control of his kingdom, came north from Kibangu to defeat the rebels.

Arrested with a baby, whom she claimed had been conceived with her guardian angel, Kimpa Vita was tried for crimes against the crown and the Christian faith. At the instigation of Capuchin missionaries, both she and the child were burned at the stake on July 2, 1706. Kimpa Vita played a major role in the renewal and reunification of the previously divided Kongo kingdom. Together with Mpanzu Mvemba or Pedro IV, she was responsible for briefly restoring the Kongo in the early 1700s. Although she died shortly after she began preaching, her politico-religious ideas inspired messianic movements struggling against colonial oppression and exploitation two centuries later. The prophet Simon Kimbangu has frequently been regarded as the spiritual and political descendant of the martyred Kimpa Vita.