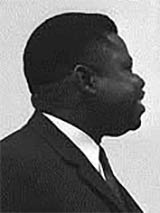 Jean Ifoto Bokambanza Bokeleale was a leader in the Church of Christ in Congo. He was a leader from the Disciples of Christ who worked during the Mobutu regime to form a single protestant church in Zaire, L’Église du Christ au Zaïre. He was a talented scholar and bold visionary, but not all protestants shared his particular vision for unity.

Bokeleale wrote some letters, but very little has been written on his life and ministry.  According to the Dictionary of African Biography, Bokeleale was born around 1920 near the town of Becimbola, in the vicinity of Lotumbe town, northwest Equateur region. Other sources place this birth on December 23, 1919 at Bompoma, near Djombo, Equateur region. He was the second child of his mother Mputu, one of his father Mbomba’s four wives. After attending primary and secondary schools, he worked as a teacher at the Christian Institute of Congo in Bolenge. He married Amba Bokaa, and the couple had seven children.

One year after his appointment as an assistant pastor at Ikongo in 1936, Bokeleale met Pastor Jean Bomenge who persuaded him to enter the Disciples of Christ primary school in 1937 in Lotumbe. He completed the four-year program within two years and joined the Congo Christian Institute at Bolenge for his secondary education, which he finished in 1942 with distinction. He was ordained a pastor on August 24, 1956. From the late fifties or from 1961 to 1963, he studied at the Faculty of Protestant Theology of Brussels and got a Master’s degree (licence) in theology. Back in the DRC, he entertained strong ties with the American counterparts of Disciples of Christ not only through frequent trips to USA, but also during his training in public administration in that country. He received his doctorate honoris causa from the Christian Theological Seminary of Indianapolis.

Bokeleale’s leadership ability was noticed throughout his education because he scored high marks and completed a study program within half the required time. In the late 1950s, Disciples of Christ missionaries saw in him as “a major leader of an African-led church.” [1] As a matter of fact, he progressively occupied several leadership positions. After his theological studies in 1963, “twelve young elders of the Disciples of Christ anxious to assert African leadership over the continuing American missionary presence chose to elect Bokeleale as the head of the Disciples of Christ in Congo.” [2] When Mobutu took power in 1965, he sought more support from Protestant church leaders. Bokeleale availed himself as Mobutu’s ally and adviser while using this opportunity to consolidate his authority over Protestant churches and promote the authenticity movement even through its Mobutist version called the philosophy of authenticity.

According to one of his entourage who was interviewed by a journalist in 1974, the authenticity campaign allowed the Congolese people to recover their true being and their deep ethos. [3] This was also the year when the authenticity campaign reached a climax as Verkys Vévé Kiamungana Mateta launched his revolutionary song “Nakomitunaka” (I keep asking myself). In a certain sense, it echoed the 1956 book Les prêtres noirs s’interrogent (Black priests are wondering). The song interrogated God about the origin of black people pointing out that Adam and Eve, Jesus, Mary and Joseph are represented as whites. All the saints are also seen as white while only devils are represented as blacks. Black symbols and prophets are rejected or put in the same category as witchcraft, in contrast with the white ones. It is strange that Verkys Vévé was forced into exile while the authenticity movement champions were in command of state affairs and church politics both on Catholic and Protestant fronts.

In 1975, Bokeleale requested that the synod of the Church of Christ in Congo consider ordaining some of the leaders as bishops. In spite of the refusal of the synod and the indignation of the majority of Protestant churches at that time, Bokeleale was elected in 1968 as the General Secretary of the Protestant Council in Congo. Two years later, he became the first chairperson of the Church of Christ in Congo. He was consecrated bishop on May 16, 1977, despite strong opposition from the Protestant elite in Congo. In 1979, he extended this authority to Disciples of Christ Church leaders by raising their social conditions and reaching Christians at the grassroots through social actions such as schools or women’s associations.

During Bokeleale’s leadership, the Church of Christ in Congo took many initiatives in the field of socio-economic growth. It increased its participation in the education sector, in health, social development, micro-finance, and business enterprises like industrial fishing and printing.