1889?-1951
Church of Jesus Christ on Earth Through the Prophet Simon Kimbangu
Democratic Republic of Congo 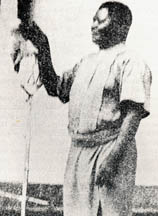 Founder of the Church of Jesus Christ through the Prophet Simon Kimbangu.

Born in Nkamba, Lower Zaire, Kimbangu had charismatic gifts, but apart from catechistic instructions by the British Baptist Missionary Society (BMS), leading to his baptism in 1915, he had no formal education. In the midst of colonialism of nearly genocidal dimensions, he experienced the leading of God into the ministry of healing and preaching. BMS missionaries, regarding Kimbangu as uneducated, rejected his application to become a catechist and thus refused to provide his ministry a legitimate place within the mission church. Kimbangu’s decisive spiritual experience, pushing him into public ministry outside the mission (1921), was explicitly linked to his rejection by the missionaries.

Kimbangu’s religious activity, which was characterized by strong charismatic phenomena (cases of resuscitation are reported), lasted from March to September 1921, mainly in Nkamba, the “New Jerusalem.” His preaching emphasized the uselessness of traditional African means of protection (resulting in the burning of “fetishes”), the direct intervention of God on behalf of the African (questioning the mediation and authority of the missionaries, at the same time rejecting African violence), and the prediction of the end of colonial and white rule (resulting in black self-awareness). As early as May 1921 Kimbangu was on the “wanted” list of the colonial police.

In September 1921, Kimbangu gave himself up to the Belgian authorities. Sentenced to death for allegedly having endangered public security, his punishment was commuted to life imprisonment, and he was treated as a dangerous convict in Elizabethville (Lubumbashi) for the rest of his life. His twelve “apostles” and thousands of followers were banned. Kimbanguism became a deeply rooted Christian movement in the then Belgian Congo. Sociologically, the prophet and his church offered a new model of social authority; religiously, Kimbangu expressed God’s love through the mediation of African symbols; and psycho-culturally he set in motion a grand narrative of the black people’s special place in God’s world.

On his death bed Kimbangu receive baptism in the Catholic church. Like Jesus, he left no writings and became a figure of legend, myth, and theology. For missionaries, for Western scholars of Kimbanguism, and for the theologians of the Kimbanguist church itself, it has always been theologically difficult to define who Kimbangu was.

Oral history has been collected in W. MacGaffey, “The Beloved City: Commentary on a Kimbanguist Text,” JRA 2 (1969): 129-147, and in Kuntima Diangienda, L’Histoire du Kimbanguisme (1984), written by the youngest son of Kimbangu, the late head of the Kimbangu Church.