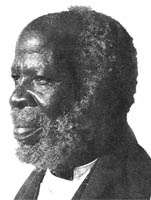 Uganda’s apostle to the Pygmies.

Waswa (Kivebulaya’s original name) was baptized by a Church Missionary Society missionary when he was thirty; Apolo (Apollos) was his baptismal name. For the previous ten years of political upheaval he had served different factions as a mercenary, and it was probably a British officer who gave him the scarlet tunic that earned him the nickname Kivebulaya, “the thing from England.” Within months of his conversion, he offered himself as an evangelist to the kingdom of Toro, and later, even farther west to Mboga in Belgian Congo (Zaire). In the first four years of his Christian life he endured extraordinary suffering, being falsely accused, chain-ganged, and flogged, yet he was upheld by a vivid vision of Christ. He was ordained as an Anglican priest in 1903; he never married. From 1899 to 1915 he was a pastor in various districts of Toro. Then, instead of taking the year’s leave he had been granted, he asked permission to spend it renewing the Church at Mboga, which remained his headquarters until his death. In 1921 a vision of Jesus, “as if I saw a man who was my brother,” directed Apolo to seek the Bambuti, or Pygmies and other little-known peoples deep in the Congo forest. His respect and affection won their devotion to himself and to Christ.

The one well-researched biography is Anne Luck’s African Saint (1963) which makes good use of Apolo’s diaries.

A. B. Lloyd, Apolo of the Pygmy Forest, especially the enlarged ed. of 1936, gives a fair portrait of Apolo’s character (pp. 44-46) but presents a highly fabricated version of events.