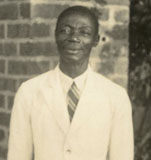 Lititiyo was one of the earliest converts in the Yakusu area. He became an evangelist and a pastor of extraordinary faith and charisma.

Lititiyo was first converted to the Christian faith by a Baptist pioneer missionary named William “Mokili” Millman, after a meeting at Yaocombo in 1904. Mokili had arrived at the end of a fight that had taken place there, just as the warring parties were getting away with the bodies of their victims for a feast. He had gone up the riverbank and had reached the top just as a young man with a spear in one hand and a man’s leg in the other appeared. He shouted to him, but the young man took no notice. There were signs that the struggle had been fierce and that the time was not propitious for trying to get the people’s attention there, so Mokili went back to his canoe and continued his journey downstream.

On his return, he called at the same town. There were many canoes moored on the beach, and it was the scene of an active native market. Mokili and his boys went ashore. At the sound of his cornet and of some singing, a crowd soon gathered nearby. Mokili had a roll of Sunday school lesson pictures and he hung it up on the branch of a tree where people could see it. The picture on view was of the Philippian jailer and the Apostle Paul. Mokili noticed among the crowd the very man whom he had seen carrying a human limb just ten days before. The man was now apparently interested in the fact that a white man was using the native language, and he began to ask perceptive questions about the picture: Were the two men both white? Which was the jailer? What sort of clothes was he wearing? He was puzzled because the man in iron clothes (armour) was asking the unarmed man what he should do to be saved. The wrong man was asking the question. He listened for the explanation, and was at once intensely interested.

The young man was Lititiyo. His influence in the neighbourhood as the eldest son of the local chief was considerable, and from that time on he used it to support the local Christian teacher in every possible way, learning to read himself. In 1906 Mokili sent Lititiyo to Yaotoke as a teacher, and he was baptized in 1907.

In 1911 an itineration took Mokili, along with his wife and baby daughter, through the villages downstream across the river. At Yaotoke a great crowd of children gathered to meet them, the older people lining the bank above. When the missionaries got out of the canoe they were led at once to the schoolhouse for an inspiring welcome service led by Lititiyo.

In 1918 Lititiyo returned to his own village of Yaocombo as a teacher and evangelist.

During the forty years after the 1911 meeting at Yaotoke described above, Lititiyo became first a teacher, then a deacon, and then an ordained pastor who was trusted by missionaries, government officials, and by the native Lokeli people. At his father’s death he was called to the chieftainship, but he passed it on to one of his brothers, as he had decided to remain in the service of the church. When King Albert visited Yakusu, Lititiyo was presented to him in response to the King’s request that he might meet someone who had tasted human flesh. Lititiyo took the opportunity to explain to the King how much the Christian missionaries and Christianity meant to his country.

Mokili Millman and Lititiyo remained close and treasured friends throughout their lives. To Mokili, Lititiyo was living proof that spiritual distinction was a gift to all humanity, wherever people may live, whatever their background might be.

When Mokili and Mama left Yakusu in 1931 for what seemed to be their retirement, Lititiyo wrote them a letter of profound spirituality and faith:

May the love of God go with you both, and to whatsoever place you go may God go before you and behind you and on every side. May your journey have His blessing from its beginning to its end and may your meeting again with Litwasi be full of gladness.

If I do not just now recollect the expectation and anxiety of your former journeys to England, yet my heart is sad and troubled and keeps saying that this is the real parting. But hope keeps asserting that it is but another journey for health’s sake and [that] they will return again, and then my heart is at peace again. As we read in the Psalms, “How pleasant it is when brethren dwell together.” I shall be glad when I stand before your face. And another Psalm says: “Why art thou cast down, 0 my soul? Hope thou in God, for I yet shall praise Him.” So I believe you will come back and in this hope my heart shall be established.

Wherever I may be I shall always love your name. Everywhere I go teaching and preaching, [I shall be] abiding in the fear of God and remembering the death of Jesus, lest I should do anything that would make me ashamed to meet you when you come back, rather doing only that which will give you joy.

Sometimes, when I am speaking and I happen to mention the pain and sorrow that I bear for faith’s sake, people say, “He is thinking of Mokili and Mama,” and then I feel I am in the right way. I know if I abide in your teaching I shall come into final joy. Yes, and even now I have joy and shall have it in your friendship.

Led by God’s spirit, made to arrive by His power, may you both be brought back again by that same grace. Go safely. For in time we shall live not in the body but in the spirit. The great and only desire I have is to see you here again. [1]

In 1957 Litwasi, Mokili’s daughter, and her husband James Butterworth, visited Lititiyo at his village, Yaocombo. They then visited Yautoke, where a choir of Lokeli maidens in orange and lime green frocks sang with enormous verve and excitement. Lititoyo described the school and the church there as “the fruits of the sowing when Mokili sent me there, when it was in the forest.”

Lititiyo represented all that Mokili had sought to achieve in his mission to the Congo. He was indeed the reflection of faith. James Butterworth, in his biography of Mokili, notes however that although Lititiyo was this indeed, he was in fact even more. On their 1957 visit, Litwasi and James asked Lititiyo, “What was it that Mokili used to say, do you remember?” “Oh,” he replied, “All that I say every day.”

To James this was very remarkable. He didn’t doubt that Lititiyo regarded Mokili as the one who conveyed God’s truth to him. Yet Lititiyo appeared to have a final force of conviction which Mokili himself never had. Under the urgency of work and commitment, Mokili had complete certainty of faith, but he was also committed to Western civilization, and not only to Yakusu. He was profoundly aware of the rationalism of his generation, and he journeyed not only in Africa, but also down the labyrinthine ways of his own mind. In reflection, Mokili did not have, until just before he died, the certitude and conviction that he had enjoyed in the urgent days of his work.

Lititiyo’s faith, however, appeared absolute. He was also confidently aware that his faith and his own message were in no way dependent on the continued presence of foreign messenger missionaries: “Did The Holy Spirit go down the river with the white people?” Lititiyo asked people who were faint-hearted because missionaries had gone home. Here was a total faith, independent of the messenger.

In 1957 Litwasi and James stood back into the edge of the forest fringing the Yakusu cemetery during the funeral of Dawidi Longo, one of the people in the second group that had been baptized nearly half a century before, at Yakusu. A tropical thunderstorm came up and great drops of rain came down on the broad leaves. Lititiyo preached beside the open grave, and interpretation was given by Hedley Ennals: “Europe is opened up now. You can go to it, but you wear different clothes when you get there because it is a cold country. It was not always opened up – it was not always that you could go there. Heaven was not always opened up. Now it has been opened up by Jesus. This man has gone there now. He wears clothes different from earthly ones.” [1]

Lititiyo possessed total faith. He was totally committed to his role as a Christian servant. He had absolute faith that the message was to all mankind. An educated, deeply spiritual, deeply respected Christian and teacher, Lititiyo represented both Christianity and humanity at its very best.

The writer, Jane Marshall, is Mokili Millman’s granddaughter. She grew up knowing of her grandfather’s deep admiration and treasured friendship for Lititiyo.

This story, received in 2011, is an abridged version of the book Mokili in Congo: A Biography of William Millman, written by his granddaughter Jane Marshall and son-in-law James Butterworth.