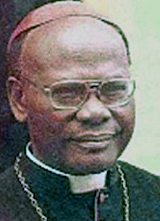 Cardinal Joseph Malula, the leading modern champion of the Africanization of Christianity, had the unenviable task of leading the Catholic Church in the Congo through the crisis of decolonization.

After being educated at the Grand Séminaire in Kabwe, Malula was the first African priest assigned to the capital, Léopoldville (now Kinshasa), where he confronted first-hand the paternalism of Belgian missionaries. In 1952 he founded study circles for consciousness-raising to compensate for the almost total neglect of African higher education by the Belgians. From this movement came a number of postcolonial politicians and several government ministers. In 1958, Malula became the acknowledged leader of the black clergy following a speech at the Léopoldsville exhibition on the place of the church in Congolese society. He was made auxiliary bishop the following year, just in time to attend the Vatican Council, where he quickly became the spokesman for francophone Africa. In 1964 he was named archbishop of Kinshasa, and in 1969 he became a cardinal.

A consistent progressive, Malula clashed with both his government and the church. He condemned ethnic conflict as the “scourge of Africa” and defended the rights of women in a famous speech denouncing those who reduced them to “slaves or instruments of lust.” After the crisis of persecution and destruction that followed independence, he began his great work - the Africanization of Catholicism, a program he called “authenticity.” He began to replace Western forms of worship and European ideas and approaches with African ones.

By 1970 the mercurial dictator MOBUTU Sese Seko had imposed order on Congo’s chaos and began a program on national unity. The country changed its name to Zaïre, and Mobutu then dropped his Christian name and demanded that all citizens do the same and be rebaptized. He called his program authenticité, a term he adopted from Malula. When Mobutu began to place cells of his party’s youth wing in Catholic schools and seminaries, Malula led the opposition. The issue of Christian names became symbolic, but for Malula the real issue was Mobutu’s dictatorship. In the presence of King Baudouin of Belgium, Malula preached against Mobutu; he then issued a pastoral letter denouncing government policy. Mobutu’s response was swift and severe: all religious schools were seized and religious instruction was forbidden. Religious festivals were banned and holidays were abolished. Malula’s life was threatened and his home was pillaged. Malula went into exile at Belgium’s Louvain University in 1972, leaving negotiations to diplomats. He returned after compromises were reached and turned his energies toward the Africanization of the church.

When he returned, two projects absorbed him: creating a truly African liturgy and holding an African Council to set directions for Catholicism on the continent. He achieved the first goal brilliantly. Carefully following the guidelines of the Vatican Council and using the best scholarly consultants, Malula produced a rite that went beyond the mere introduction of local styles of music or customs and radically reshaped the style and impact of the Catholic Mass. Resistance from Rome was overcome with the minor concession that leopard skins would not be used as vestments. The incorporation of dance, talking drums, and African literary forms was most striking. While visiting Kinshasa in 1980 and 1985, Pope John Paul II participated in services using the new rites.

Malula hoped for a married clergy, but when Rome forbade even the discussion of the option, he strengthened the existing role of lay catechists - village religious elders. Vatican officials regarded him with suspicion, but the pope appointed him co-chair of the 1985 synod as a sign of his personal support. Malula wanted, with a continental council, to confront and resolve the issue of Christianity and African identity. His influence among African bishops waned, however, with the massive increase of indigenous bishops chosen by John Paul II. The pope approved only a synod of African bishops, using an agenda drawn up by the Vatican. The synod was held in Rome in 1994.