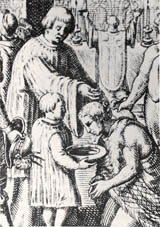 Dom Manuel (circa 1430-1510), the Mani Soyo (ruler of Soyo), was one of the first officials in the kingdom of Kongo who sought to understand and exploit the novel technological and spiritual powers introduced by the Portuguese after 1482.

Along with Nsundi, Mbata, Mbamba, Mpungu, and Mpembe, Soyo was one of the six provinces in the kingdom of Kongo. Soyo, however, claimed to be the most important province because it was located on the coast and because Mpinda at the mouth of the Zaire River was Kongo’s main harbor. After the Portuguese explorer Diogo Cao arrived in 1484, this pre-eminence increased since all European traffic passed through the Mani Soyo’s domain.

Very little is known about the personality of the Mani Soyo, who eventually took Dom Manuel as his Christian name. When Diogo Cao landed, he was already an old man. His enormous political prestige was evident from the first, since the Mani Kongo (ruler of the Kongo) Nzinga Nkuwu referred to him as “uncle.” Rather than expressing actual blood ties, the title “uncle” indicated a political relationship that obligated the Mani Kongo to give respect and deference to the Mani Soyo.

Since he lived near the harbor on the Zaire River, the Mani Soyo was the first high-ranking Kongo dignitary to receive envoys from King Joao II of Portugal (reigned 1481-95). Like Mani Kongo Nzinga, he was greatly impressed by the wonders of European technology and by Christianity, which he believed was the supernatural force energizing this powerful new culture. The Mani Soyo attempted to compete with his superior, the Mani Kongo, for control of Portuguese knowledge and spiritual strength. So eager was the Mani Soyo that when a group of masons, carpenters, and missionaries requested by Nzinga, landed at Mpinda on March 29, 1491, he detained the delegation and demanded to be baptized immediately. Pleading that his advanced age made it unlikely that he could live much longer, and pretending that the Mani Kongo had granted his approval, the Mani Soyo accomplished his goal and was baptized on April 3, 1491.

Because his baptism preceded that of Mani Kongo Nzinga, the Mani Soyo hoped to gain an advantage with the Portuguese. His choice of Dom Manuel as his new Christian name reflected his belief that two people bearing the same name were unified in a particularly intimate relationship. By selecting the name of the prince heir to the throne of Portugal, Dom Manuel, the Mani Soyo obliged the Mani Kongo and his wife to take the names of Joao and Eleanor, the Portuguese royal couple who were old and would soon be replaced by the crown prince.

Both the Mani Soyo, Dom Manuel, and the Mani Kongo regarded baptism as an esoteric rite conferring special magical powers on the recipient. Thus, neither ruler wanted other notables to be baptized. Although Mani Kongo Nzinga abandoned his Christian religion, Dom Manuel remained faithful.

In the 1506 succession wars between Nzinga’s sons, the Christian Mvemba Nzinga, also known as Afonso I, and the traditionally oriented Mpanzu a Nzinga, Mani Soyo Dom Manuel strongly supported Afonso, who eventually won and became a “Christian Prince.”