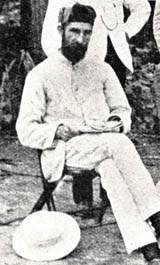 Aaron Sims (18?-1922), a Scottish missionarydoctor, was a pioneer worker for the Livingstone Inland Mission (LIM) and the American Baptist Foreign Mission Society (ABFMS) in the Belgian Congo. He worked from 1882 until 1922.

Sims’ interest in Africa began while he was a medical student at the University of Aberdeen in Scotland. Having read the accounts of the Anglo-American explorer, Henry M. Stanley (1841-1904), he had tried to join Stanley’s expeditions. After failing, he contacted Henry and Fanny Guinness, co-founders of the Livingstone Inland Mission which had been sending missionaries to the Congo since 1878. Impressed with Sims’ practical piety, his scholarly attitude, and his scientific knowledge, the Guinnesses accepted the young doctor and sent him to Palabala, about 15 km (9 mi) east of Matadi. When Sims came to Palabala, the mission station had been destroyed by fire, and had lost three workers because of illness. Had it not been for the arrival of Sims, Palabala probably would have been abandoned.

The goal of the LIM was to extend its work into the heart of the African continent. At first, however, the cataracts between Matadi and the Stanley Pool (now Malebo Pool), as well as hostility on the part of local peoples, made it difficult to advance into the interior. Once Stanley had established the Léopoldville station at the Pool, however, regular transportation and security seemed assured, and the LIM set up a mission station at Léopoldville in 1883.

Sent to Léopoldville, Sims was soon making plans to move even further up the Congo River. Late in 1883 he traveled upstream to Bolobo, 250 km (150 mi) north of the Pool, as a first step to founding a station in Equateur. He also made plans to begin work at Stanley Falls (now Kisangani).

A small, independently-run mission society, the LIM was unable adequately to finance and supervise the ambitious program it had begun in Africa. Thus, in 1884, the LIM was happy to transfer many of its sites and personnel to the larger, church-supported American Baptist Foreign Mission Society. Thus, Sims joined the ABFMS staff.

It was in Léopoldville that Dr. Sims made his greatest contribution to the progress of the ABFMS. He built the first Protestant chapel in the area, and won the first set of converts for the mission. He was very active as a medical doctor, and treated patients of all religions. In April 1887, he came into conflict with Henry Stanley, who was leading a military expedition to relieve Emin Pasha (1840-92), a German scholar and administrator, serving the Ottoman Turkish government as governor-general of the Sudan, who was threatened by the Mahdist uprising there. Needing transportation, Stanley asked missionaries at the Pool to loan him mission steam boats. Although the British Baptist Missionary Society (HMS) acceded to Stanley’s demand, Sims refused the Congo Free State’s request to use mission property for colonial advancement. In the end, Stanley had to requisition the steamer, the Henry Reed, forcing Sims to turn it over to the government. In addition to his other work, Sims found time to study one of the local languages, Teke, spoken by the Tio (Teke) people, and published a Teke dictionary and grammar. He left Léopoldville in 1895 and was sent to establish a post at Stanley Falls. There he had a colleague called Dr. Hote, with whom he cooperated until the station was destroyed by the Arabs and then abandoned by the Mission.

In 1900, Sims was sent to Matadi where he worked until 1922. Once the new ABFMS station had been officially opened in Matadi in 1902, Dr. Sims worked to make the post a showpiece. He won several converts and expanded the stations at Palabala, Lukunga, 110 km (65 mi) northeast of Matadi, and MbansaManteke, 50 km (30 mi) northeast of Matadi. He tried to root out fetishism, polygamy, and “superstitious” practices, and succeeded in raising the moral and spiritual standards of the inhabitants.

He represented the ABFMS at several Protestant Mission conferences. One of these was held in 1907, and led to the founding of a school for African pastors and teachers at Kimpese, 110 km (65 mi) east of Matadi. Before this, in 1902, he had represented the ABFMS at the Conference of Evangelical Missions in the Congo. This was the first body of the Protestant Council of the Congo (P CC), now known as the Church of Christ in Zaire. In 1910 he hosted a conference of ABFMS members at Matadi.

Dr. Sims worked with zeal and dedication against several obstacles. Although the Catholic Church in the Belgian Congo, with the open support of King Leopold II (reigned 1865-1909) showed hostility to the Protestant missions, Sims faced his rivals with resolution and perseverance. His relationship with the Africans was very good, and he became very popular in the country. He made a good impression on all who came into contact with him, but was a puritan who forbade the use of alcohol and drugs. He also combated certain harmful customs, such as the poison ordeal which was often carried out in the Lower Congo region.

Dr. Sims left the Belgian Congo in 1922 and went to Britain for medical treatment. When he died there, in the same year, individuals and organizations in many countries paid glowing tributes to his memory.