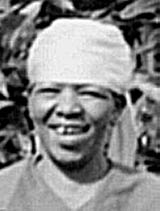 Lillian Bhembe was just a little girl when she attended a service at Ezulemi and, along with other children, raised her hand and declared, “I love the Lord.” Later she testified that the Lord had helped her keep those words true. Soon after that, her elder sister requested that she stay at her home with her child. Lillian’s mother agreed. Here she had the opportunity to attend the Phophonyane church and enter the school started at the Grace Mission by missionary Etta Innis (Shirley), who arrived there in 1911. Lillian was one of the first pupils in the school.

As she entered her teen years, great trouble came to the Phophonyane congregation. A faction that opposed the strict Nazarene rules against some nonChristian practices rebelled and started a separate church. This brought a great inner conflict for Lillian. Her best friend joined the new group, and she was torn between her desire to go along with her friends and her loyalty to the Nazarenes where she knew in her heart the truth lay. Although her home influence was pulling her away, her elder sister remained loyal to the Nazarene Church and that helped Lillian. The conflict ended when she went to the girls’ school at Endzingeni. She later expressed her thanks to God for helping her win this great battle. She was very sorrowful about those who left the Nazarene Church at that time and realized her great privilege of belonging to the church. She appreciated the moral restraints that she felt as a young person even though at that time she really did not understand what it was to be a believer. When Dulile (Expensive), missionary Louise Robinson (Chapman), arrived at Endzingeni to take charge of the Girls’ School in 1924, she found Lillian there.

During a time of great revival at Endzingeni in 1924, Lillian truly committed her life to God. After that, she began to seek to be sanctified. For many days she sought, lying under the shade of a tree during the day and in the church at night. She refused to eat or sleep until the Holy Spirit came in sanctifying power into her life. She was one of the ones that were mightily baptized with the Holy Spirit during those revivals. At that time she also felt God’s call to the ministry. She turned down several suitors so that she might be free to devote all of her time to the service of the Master.

Telling about the revival at Endzingeni she said, “It was spiritually hot. We ran to the towns, to the homesteads both large and small, the offices, the farms. We confessed and made restitution for things we had stolen from others and from white neighbors. We said that we were helping ourselves even though it was killing us. The great joy was to find death to self-centredness. The light from Heaven dispersed all of the darkness that remained in my heart. I forsook the way of darkness and chose the way of the Lord Jesus. Since that time I have never had any desire to go back. Today I do not desire anything from the past. If I fall, I arise and go forward.”[1]

Lillian began teaching in the Girls’ School while she was still in school herself. In 1933, she was one of the first two Nazarene girls to pass the Standard Six (Eighth Grade) government examinations. She was an exceptional student and excelled in needlework and basketry. She was also an excellent teacher and continued to teach at Endzingeni Primary School until retirement in 1973. She was one of the pioneer teachers in the Church of the Nazarene. Lillian was a spiritual giant and was endowed with exceptional wisdom.[2]

It was said of her, “Lillian is so generous that she often gives of her small salary, even to the limit, sometimes leaving little for herself….She shines as a preacher for she seems to preach heaven down. She has a beautiful voice, and a spiritual radiance illuminates her features when preaching. Lillian is conscientious and humble, but always light-hearted and happy. Miss Robinson says, ‘We think we couldn’t run the institution without Lillian.’” Lillian Bhembe was also an excellent interpreter from English to Swazi.[3]

In an interview in 1985, Miss Lillian Bhembe said, “My early experience as a child playing when I said the words, ‘I love the Lord,’ led me to becoming a real Christian. I did all I knew until Miss Robinson arrived in 1924, and then I found a deeper experience with the Lord. I am thankful for such a Christian faith that has helped me remain true to the Lord until today.[4]