1900s
Church of the Nazarene
Eswatini 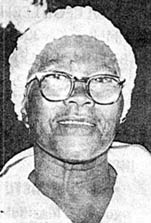 Pastor Alice Vabayi Khumalo [1] was a small child when Rev. Harmon and Mrs. Lula Schmelzenbach came to eswatini. Some years later she heard a preacher, one Sunday, inviting them to come to church for the bread of life. When she went she wondered where the bread was. She wanted to become a Christian but her parents refused to allow her to attend church services. They threatened to whip her. She was promised in marriage to a chief with many wives and was sent to his home to be a servant for her older sister.

When grown in 1921 she was given a pot of beer and sent to become his wife. At the celebrations she slipped away into the dark and ran away while the other girls were bathing at sundown in a nearby stream. Men and dogs chased her but she hid in a pile of rocks and evaded them. At home the next day she realized that her family would certainly take her back to the chief. Vabayi tied her few belongings in a piece of cloth and ran away toward Barberton in Mpumalanga, South Africa. On the way she passed Endzingeni Mission. Hearing the bell ringing and people singing, she went into the mission and listened from a hiding place.

Thinking she could not find the Lord until Sunday, she kept hidden in the tall grass and slept in the veld. On Sunday she went and gave her life to Jesus. Missionary Schmelzenbach took her back home to consult with her parents but she had to run away again and entered the girls’ home at the mission. A month later two of her sisters, Ludia and Salome, came to a meeting and were converted. The angry parents, cursing and piercing the ground with their spears, came to fetch them. They appealed to the government and the Swazi king. In the end, prayer and courage prevailed. For years, however, the girls could not leave the mission grounds for fear of being abducted. At baptism Vabayi took the name Alice.

During the revival in 1924 Alice Khumalo received the baptism with the Holy Spirit and felt called to serve the Lord and be a worker for Him. She was the cook in the girls’ home and for special meetings and would sing as she worked. She was always fearless in doing what was right and opposing wrong and had a deep concern for the welfare of people’s souls. The Lord helped her to win both of her parents to the Lord. By 1940 she received financial help so she could free herself from the claims of her brother because of her refusing to marry the chief.[2] Then she attended Bible College at Siteki.[3]

When the mission was started in the northern province of South Africa at Ga-Malebogo, Blouberg, in 1948, Alice Khumalo accompanied the missionaries, Rev. George and Mrs. Jeanette Hayse. She worked as a cook and as a Bible woman.[4] She became a Swazi missionary in going to work among the Gananwa people with different traditions from her own and she had to learn their northern Sotho language.

Every Saturday morning she would lead a group of women from the mission and go out “marching for the Lord” to visit in surrounding homes. People of the area called the mission Swazini (The place of Swazis) because of Alice and other Swazi-speaking workers who pioneered the work of the church there.

Alice Khumalo was a faithful and effective worker for the Lord on that district. In 1960 one night she was all alone at the Naboomspruit Mission and she became very much afraid. She got up out of bed to pray and as she prayed God spoke to her with the words, “Don’t be afraid, I am with you.”[5] Upon retirement Pastor Alice Khumalo returned to her home near the Endzingeni Mission in eswatini. In 1972 she was ministering at Millsite.