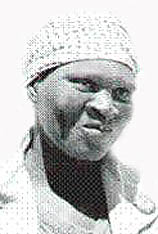 Pastor Salome Khumalo, Alice Khumalo’s half-sister, once went to church at the Endzingeni mission when she was a girl of twelve and found the Lord (as noted in Alice Khumalo’s biography). Her father engaged her to a non-Christian man, but she refused to go to him and give up her worship of God. Her father was only interested in obtaining the lobola cattle for his daughter. Salome’s parents warned her not to go to church but she went again. They whipped her but she again went on the third Sunday. Again they whipped her. That night she ran away and went to the mission. Her parents reported it to the Commissioner at Pigg’s Peak.

The police came and arrested her and put her in prison. The court freed her and sent her home. Again she went to church. Her parents had her sent to the King’s court at Lobamba for punishment. For seven months she remained there under tribal discipline. She said that she prayed every day for God to protect her and save her. The tribal authorities finally sent her home and again she ran away to the mission. This time they left her alone and she stayed in the girls’ home at Endzingeni. Later she worked at the dispensary on the mission.[1]

Miss Salome Khumalo also went out as a missionary from eswatini. In 1950 she began the church at White City (Jabavu), the first urban Church of the Nazarene in what later came to be called Soweto in Johannesburg. In 1963 when the Bible College started at Arthurseat in Northern Province she was matron of the ladies’ residence. She led in early morning prayers each day and saw to it that everything was always clean. She kept strict discipline. Above all she always had a deep concern for the spiritual welfare of the ladies and set an example of Christian living and hard work.[2]

In 1972 she left to retire in the Barberton area of Mpumalanga.[3]