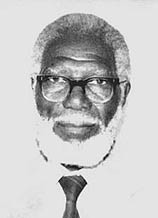 Gareth Muhle Mabila was born at Lomahasha to unbelieving parents who later became Christians. He began attending the Lomahasha Nazarene School at the age of thirteen. The stone church building was used for the classroom and the only furniture were the church benches. He considered himself to be a Christian because he was in school and attended church services. Then, in 1932, during revival services held by Rev. Joseph Mkhwanazi, he accepted Jesus as his personal Saviour.

In July of that year he transferred to the Nazarene boarding school at Pigg’s Peak. The school moved to Siteki in 1933 because there students could be fed with crops from the farm purchased by the mission. In 1938 he went to Bremersdorp (Manzini) Nazarene School, where he completed his primary education that year. He then taught for one year at Sitsatsaweni as the only teacher teaching grades one to four.

He then went to work in a gold mine in South Africa. As he worked underground everyday he heard a clear voice saying to him, “What are you doing here? Your place is in the classroom. Go back to eswatini and teach the school children.” To fulfill his calling, he returned to eswatini to receive training at the Nazarene Teacher Training College. Afterwards he was posted to the Pigg’s Peak Nazarene School and then in 1948 he joined the staff at the primary school in Manzini.

In 1946 Mabila married Miss Emeline Tintombi Dlamini (1928-2002) at Pigg’s Peak. Emeline was born at Hhelehhele in northern eswatini and neither of her parents were Christians. The pastor of the Hhelehhele Church of the Nazarene was Rev. Solomon Ndzimandze, and he visited many homes during weekdays. One day, he came to her parents’ home and told them about Jesus and his power to forgive sins. He prayed with the family and invited them to come to church. Emeline and her elder sister requested permission to go to church but their parents refused. The girls kept asking until they were allowed to attend. The first time she went to church, Emeline accepted Jesus as her personal Saviour and enrolled at the Hhelehhele Nazarene school the following year.

A few years later she became sick, and Rev. Ndzimandze carried her on donkey back to the Nazarene Mission Clinic at Pigg’s Peak and placed her in the care of missionary nurse Anna Lee Cox, who nursed her back to life. After recovering from her sickness, Emeline stayed at the mission and worked for Miss Cox who treated her like her own child. She learned many things including how to cook and keep house. She regarded Miss Cox as her mother. At Manzini Emeline helped in missionary homes and in the hospital kitchen. She had a burden for people who were sick at the Raleigh Fitkin Memorial Hospital, held services in the wards, and spoke to patients about their souls. She won many of them for Jesus.

Mabila and Emeline were blessed with three girls and one boy. Their eldest daughter married a Peace Corps worker and they resided in Lancaster, California. Their second daughter married a young man from South Africa while they were both studying in the USA. They lived at Overland Park, Kansas City, and later returned to South Africa, leaving their two married daughters in the USA. Mabila’s son passed away in 1994 leaving his wife, two daughters, and a son.

Mabila was awarded a scholarship for a course in primary education at the Cambridge Institute of Education, a wing of the University of Cambridge in England from 1966 to 1967. Later he became the principal of the Manzini Nazarene Primary School. Of his teaching, he says, “God has used me as a Christian teacher to win some of my students to Jesus. Some of them are Nazarene pastors in eswatini and others are teachers and nurses. Some hold high positions in the eswatini Government.” He retired from teaching service in 1975 after having been a teacher for thirty-three years.

In the local churches where he has been a member he has served on church boards and as secretary of the church board. He taught Sunday school classes until his death. Mabila often taught Swati to new missionaries and served as interpreter in church services as the need arose. Besides his mother tongue, Swati, he spoke English, Zulu, and Shangaan.

After retiring from teaching, he was employed as payroll officer at the Raleigh Fitkin Memorial Hospital from 1976 until 1983. Then from 1985 to 1998 he worked with Transworld Radio teaching Swati to their foreign employees. The Mabilas continued to reside in their home with grandchildren in Zakhele Township Extension, Manzini, and Mr. Mabila helped in the Manzini hospital maintenance department.[1]

In September 2000 Mabila reported that Emeline suffered from rheumatism, was unable to walk, and did her work while sitting on a chair. She missed church services but listened to services broadcast over the radio.[2]

Mabila was struck by a car on the way to a camp meeting held at Manzini Sharpe Memorial Church on Easter Saturday 2002. Injuries were serious and he passed away on April 22. Dr. Samuel Hynd preached at the funeral service attended by hundreds. He lived an exemplary life and will be greatly missed. Emeline had died six weeks earlier from rheumatism and heart failure.[3]