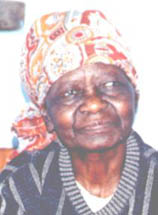 Miss Beta Maluka was a pioneer Nazarene nurse in eswatini. She was from a Sotho family at Sabie, Mpumalanga, South Africa and was converted in 1921 through the influence of Missionary Joseph F. Penn. Her brother decided that she had to be married to a nonChristian man. Believing that she should not do this, Beta decided in 1924 to go away to the girls’ school at Endzingeni in eswatini. Her mother was at the Sabie railroad station to prevent her from leaving. As the train pulled out Beta made a lunge and boarded it. Her mother grabbed her by the jacket she was wearing. It tore away and her mother was left on the platform holding it.[1]

At Endzingeni Beta helped in the clinic. Mrs Fredah Hlatshwayo tells how years later Miss Dorothy Davis taught them about burns in their Surgical Nursing class. She told them of an experience she had as a nursing sister that had just arrived in eswatini and was posted to Endzingeni Clinic. A little girl was beought in that had been badly burned. Before consulting the sister, Beta Maluka removed the burnt clothes and quickly scrubbed the girl with blue soap (soap used for washing clothes). When Miss Davis asked her about it she replied, “This is good treatment for burns.” Dorothy Davis was shocked but instead of scolding the nursing assistant she showed her the proper treatment for burns. At the same time the missionary discovered what the traditional treatment for burns was in eswatini. Fredah continued, “She laughed when she told us and we were all amused by her demonstration showing us how Beta did it.[2]

As Beta was unable at first to read the labels on the medicine bottles the missionary nurse would add cake coloring to the contents to color-code them so as to signify their use.

Beta Maluka continued in school and after that she went to work at the Raleigh Fitkin Memorial Nazarene Hospital in Manzini and went into nurses’ training. She was with the first class graduating from the nursing college.

She never married and after her graduation returned to Endzingeni Mission Clinic as a nurse and worked there faithfully for many years until her retirement. She was highly regarded by the community in the area. Thay gave her a place to live after she retired in recognition or her many years of service. In 1985 she testified: “I loved Jesus and left the worldly friends who were of my age. I did not like their lifestyle so I gave myself to the Lord. I have continued to follow him all these years.”[3]

In 1990 she moved to Mbabane where she was an invalid and became blind. Her nephew and his family cared for her. Beta Maluka went to her eternal Home in 2004.