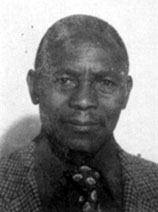 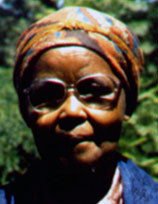 Caiphas Masalesikhundleni Mnisi was born on April 20, 1924 at Vusweni, Ndlembeni District in eswatini to Daniel and Maria (Lukhele) Minsi. He grew up at Sigombeni in the Manzini District. Caiphas began school at Sigombeni Primary School and as a boy he herded his father’s cattle. He reported that there was spiritual darkness in his home and he grew up without knowing God. Yet his conscience told him that there was a living God. As he grew older he and his sister lived at Mbekelweni, and it was there that he began attending Methodist church services. In spite of the singing, sermons and prayers, however, he continued to have a void and a hunger in his heart.

Caiphas was surprised one evening when he saw a very bright star that lit up the sky. He tried to follow it and when it faded he humbly knelt down and prayed. As he prayed there in the darkness, he had a vision of a great multitude of people that were in great trouble and were enslaved by Satan. Caiphas knew nothing about the forgiveness of sins at that time, but it seemed to him that God was drawing near to him. After his vision he felt a great desire to learn how to pray. He soon began reading the Bible and praying at home; this seemed to lessen the great burden he experienced.

In 1947 Caiphas went to Johannesburg to find work and he lived with relatives in Jabavu. They lived in a crude shanty built mainly of sacks and the sun and stars shone through their roof. He attended Christian services that were held nearby but found no spiritual satisfaction in them. His change in circumstances and experiences at the worship services discouraged him.

One day in 1950, a preacher named Kunene, who was from a mine at Randfontein, came to visit a relative as well as the Mnisis. Upon his visit with the young couple he prayed with them and his friend invited them to the Church of the Nazarene where they met Gideon Nkambule from eswatini, a preacher from Jabavu (White City). Upon hearing the gospel, Caiphas began to realize that he was a sinner before God and he confessed his sins and found forgiveness, great peace, joy, and satisfaction. He joined the probationer’s class and learned about following Christ and the blessing of tithing. Having tasted all that the city could offer, he found that the Lord was good and he received the blessing of entire sanctification.

Joan Mnisi, his wife, testified, “I was born at Luklokohla in the Manzini area and was raised in a Christian home. A wayside Sunday school was held in our home until the Luklokohla Nazarene Church was built nearby. I started primary school at the Nazarene school in Manzini and stayed at the hostel. After that I went to a Methodist school in Zululand where I did Form I, I married and was saved in Johannesburg under the ministry of Reverend G. Mkambule. Since that time I have been praising the Lord who has led me all the way. I still love him and wish to continue following him.”

After his sanctification experience, Caiphas prayed and he saw that same bright light in the sky beckoning him to follow. Again, he had the vision of a great multitude of people who were enslaved and in great trouble and living in terrible darkness. They called to him to show them the way to God. Upon relating the experience to his pastor, Caiphas learned that this meant God was calling him. He soon began witnessing to people at his place of work.

In 1955 the Mnisis went to Bible school at Siteki in eswatini. They found this to be a period of great blessing in their lives as they saw people find the Lord as they visited homesteads and during the revival services that they held. Joan graduated from the Bible school as a top honor student and Caiphas with first class honours.

In 1957 they went to minister at Jabavu in Soweto. At first it was only their immediate family in the congregation. They praised the Lord when the congregation grew to ten people. Since there was no financial support from the local congregation, they almost closed up the church but since they feared it would make them a laughing stock in the community, they decided to persevere and keep the church open. They cried many tears over this impossible situation, yet they trusted in God’s promises to care for them and they persevered. The Mnisis soon held a series of revival meetings. At first, only a few children came and none of the regular church people attended. The situation was difficult because there was no money to pay the evangelist and it was difficult to provide food for him. Their calling and concern for that community grew stronger, however, and in 1959 their perseverance paid off after Mnisi preached a funeral service that garnered a great response from the community. The small congregation soon started to increase steadily.

In 1961 the Mnisis went to pastor the Jabulani Church. Previous pastors had stayed there less than a year. The Mnisis, however, experienced a great response from the people as they visited individuals and families in the community. Many people, both young and old, repented and became Christians. Caiphas believed that it could not have happened without the faithful support of his wife Joan. She was a strong preacher and she passionately sought ways to help the congregation grow. The Sunday school that the Mnisis established in the Jabulani Church was one avenue through which growth occurred despite the fact that many people saw it as a program only offered for children. Eventually, however, adults came to join the Sunday school as well.

Soon an active group of young people emerged and they enthusiastically went out and visited people in the area, sang, and testified at places (even outside of the Johannesburg area) with Mnisi’s encouragement. Joan proved to be a great help in teaching the young people and answering their questions. The people quickly responded to the challenge of paying tithes and offerings to God, and within two years the Jabulani congregation became fully self-supporting.

In 1969 the Mnisis were called to pastor the Siteki Church in eswatini. That same year, Caiphas was ordained by V. H. Lewis. At Siteki the couple was welcomed with open arms. There, Joan became the superintendent of the Sunday school program. God greatly blessed their ministry together and the church prospered. Caiphas taught a class in the Bible College until he needed to give it up because of the pressure of his pastoral duties. Some of the problems that they met with caused them tears but they trusted God’s promises, as they relied on scriptures such as, “And surely I am with you always, to the very end of the age” (Matthew 28:20), and “I can do everything through him who gives me strength” (Philippians 4:13). During their twenty years pastoring Siteki Church they started and organized new churches at Maphatsindvuku, Maphungwane, Tikhuba and Makhewu.

Reflecting on his life of ministry, Caiphas told a group of young pastors that, “Since I’ve been in the church I have never complained to God or blamed anyone. I am pleased about my ministry and the work I have done for the church of Jesus Christ. It is very dangerous to blame the one who was the pastor before you…If you are to be a pastor, pray, trust God who called you, have faith, be patient and understand your feelings. God never calls preachers to fool them.” In his remarks, Caiphas referred to Proverbs 3:5-6, “Trust in the Lord with all your heart and lean not on your own understanding; in all your ways acknowledge him, and he will make your paths straight.”

In reference to Caiphas, Loderick Gama said, “As pastor of the church which serves the College, his ministry was characterized by a love for everyone and a genuine love for the work of God which served as an excellent model for Bible College students. He stressed the importance of progress in the Church and continually stated that the only way progress could be achieved and maintained is through the work of the Holy Spirit as a result of much prayer on the part of the pastor. Although he has spent most of his ministry as a pastor, he has shown a spirit of evangelism in his preaching and pastoral methodology. In the surrounding communities, he reached homes and individuals to a wider extent than most people realize. Believers and non-believers alike looked to him for spiritual advice.”

Caiphas’s final word about his life of ministry with his wife Joan was, “I thank God who led us in his work. And not only that, he also took care of us while we worked in his field. It is sweet to walk with Jesus.” The couple retired in 1990 at Siteki and frequently participated in the life of the church there as they were able. Caiphas was frequently called to both be a supply pastor and to hold evangelistic and revival meetings. In 2002 he began working with the Mayenjane Church until he died from a stroke on February 7, 2013.

Jenkins, C. S. “They are Graduated.” In The Other Sheep. Kansas City, MO: Nazarene Publishing House, 1957.