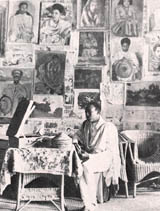 Born in Mahedara Maryam in Bagemder province, he was educated in the customary Ethiopian church subjects of poetry, singing, and painting. He later went to Addis Ababa in 1920 as a traditional artist. In Addis Ababa he painted murals of the angels Mikael and Gabriel, illuminated a manuscript of the Four Gospels for the Trinity Cathedral, and was chosen to decorate the important church of Qachane Madhani Alam. In 1932 he was selected by Emperor Haile Selassie (reigned 1930-74) to study abroad, and spent three years at the Ecole Nationale des Beaux Arts in Paris, where he was greatly influenced by French painting. On his return home he was made responsible for the decoration of the Ethiopian parliament in Addis Ababa, and also founded Ethiopia’s first art school. He continued to paint during the Italian occupation from 1936-41, and decorated the Trinity Church at Dabra Berehan in northern Shawa.

After the liberation of Ethiopia in 1941, he repainted his parliament murals, which had been damaged during the occupation. He also decorated the Trinity Cathedral, where he painted a Madonna, as well as representations of Emperor Haile Selassie at the League of Nations, and crossing the frontier from the Sudan into Ethiopia at Om Idla in 1941. Aganaw was also engaged to design the first post-war issue of Ethiopian banknotes, but his promising career was ended by a fatal car accident. Several of his poems have since been published by the Ethiopian scholar Mahatama Selasse Walda Masqal.