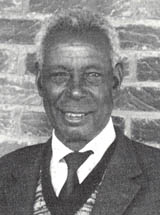 Kes (Priest) Daffa Jammo was one of the church fathers in Aira, Wollega, and carried great responsibility for the churches during the Italian occupation.

Daffa Jammo was born in in 1910 in the small village of Kannawo, found between Gimbi and Dembi Dollo in Wollega. His father’s name was Jammo Chali and his mother’s Baji Yodo and he was the sixth of nine children. His father, a peasant farmer, died when he was young and, as the last child-his three younger siblings having died in infancy-he grew up in suffering and hardship. But he was loved by the family and had many nicknames. At age eleven, he began to make raincoats from straw like his neighbors and raised money to buy chickens to tend. Then he became a goat shepherd. In addition, he began selling water and onions to make more money. As a fatherless young man he tried his best to make ends meet.

Daffa had two wishes as a young boy. He wanted to have a reputation like others in his area known for their bravery in killing elephants and lions. His second wish was to be a judge so that he could listen to people’s problems and find solutions to relieve them from their suffering. He was interested in the correct translation of languages, especially in judicial matters. During that time Lutheran missionaries were establishing a mission station at Aira. Daffa heard that the missionaries were there to open a school. This interested him so he and his friend Faisa Oncho went to the missionaries to ask for work. They were given jobs even though Daffa was just fifteen years old at the time. He cut wood and began to teach the Oromo language to the missionaries. He also purchased milk and food and at times acted as a guard for the missionaries. They began to call him “the honest guard.” He was just nineteen when they gave him this nickname.

One of the first missionaries, Pastor Wasseman, learned of Daffa’s integrity and developed a relationship with him. Daffa taught Wasseman Oromo while Wasseman taught Daffa German and both were successful in their language-learning endeavors. As a result, they prepared a small Oromo-German Dictionary. They also developed teaching material on catechisms of the Christian faith. Wasseman taught Daffa how to pray and both put their efforts together and translated German songs into Oromo. When he was twenty-two years old (October 1933), on Wasseman’s recommendation, Daffa went to Addis Ababa for two years of teacher training and obtained his diploma. Afterwards, he returned to Aira and began to assist Pastor Wasseman in teaching. At age twenty-five Daffa was ordained as the first Ethiopian pastor in the Lutheran Church. This took place during the Italian occupation.

Because of the war, the missionaries were told to evacuate their families from Ethiopia. Pastor Wasseman took his wife and children to Gambella to send them to Germany via Sudan. On his way back to Aira, Wasseman passed through Dembi Dollo and spent the night there in the American mission compound. During the discussion about the current problems they faced, the American missionaries mentioned an orphan girl who lived with them and had no place to go to when the students left for their villages when the mission compound was evacuated. At this point Pastor Wasseman remembered that his co-worker Kes Daffa Jammo was single and suggested that the orphan girl be given in marriage to the young priest. He also told them that he was going to give Daffa the responsibility of caring for the Aira mission compound. The American missionaries told Pastor Wasseman that the orphan girl, Kannatu Karorsa, was a devout Christian girl raised in their compound. These missionaries agreed to this marriage and the ceremony took place in January 1936. This was the first Christian wedding ceremony at the Aira church. The couple was blessed with nine children. Their first child died at age two but the names of the other eight were Samuel, Paulos, Girma, Hana, Aberash, Daniel, Tsion, and Deribe.

During the Italian occupation, while Aira mission compound was under Daffa’s care, there was much looting. He protected the compound by making thorny fences around it and dug caves and surrounded it by rocks. He also sent rumors to the bandits that he would kill them if they tried to attack the mission compound.

Kes Daffa had learned some basic medical treatment from the Germans and gave first-aid to many who were wounded by the bandits. People from the vicinity also came to him for dental care. He went to Yubdo and Gimbi to treat the sick. Because of his faithfulness and commitment to his work, the Italians living in Gimbi and Yubdo referred to Daffa’s name with respect and admiration.

With the missionaries gone, Kes Daffa served as a pastor to the evangelical Christians in Wollega and persevered in the midst of opposition both from bandits and from Orthodox Christians who disturbed the peace by telling the people to oppose the work of missionaries. Kes Daffa preached positively about the mission work. As a result, the missionaries were able to contribute to the community through health, education, and gospel teaching. As the first pastor, Kes Daffa also carried the message of the gospel to many places in Wollega by foot and by mule. He was able to establish thirty churches in which hundreds and thousands of believers worshiped the Lord.

Kes Daffa has written twenty-seven books only six of which were published during his lifetime. The other twenty-one are in the process of being published. His children are attempting to establish a memorial foundation that would encourage the local area in which their father served (2004).