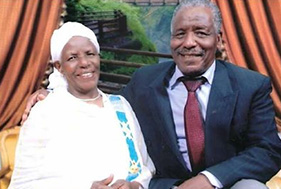 Tadele Debessa is from the Fakiso clan of the Sidama people group in the Sidamo Province of southern Ethiopia.  His parents were traditional religionists and worshipped the high God Magano. The spirit cult was administered by the kalicha, who were greatly feared by the local Sidama population for it was believed that they controlled life and death, sickness and health.

It was through an itinerant evangelist that Tadele’s uncle first heard about Jesus. This uncle then shared the Gospel about Jesus to other relatives including Tadele’s family. Tadele began to understand that Jesus Christ is stronger than all the spirits of the Sidama traditional religion. At age 21 he was baptized by the Danish Lutheran missionary, Rev. Milant.  Soon after Tadele’s conversion and baptism, his mother became a believer and she eventually served as an outstanding evangelist in the Bale and Sidama regions.

In his youth, Tadele had limited formal education, but through various means he managed to read and write in Amharic, the national language of Ethiopia. After studying in a short rainy season course at the Dodola Danish Mission, in 1967 he was given the opportunity to attend the Dilla Mekane Yesus Bible School for one year. Tadela was then assigned as an evangelist to his home area of Hamesho, in Sidamo. He served in this capacity from 1968 to 1980. As he was well respected in the area he was elected as chairperson of the local farmer’s association. In this position he was able to mobilise the local residents to build schools and roads and to conduct adult literacy classes. Because of political unrest in the Hamesho area caused by the Sidama Liberation Movement, with the support of weapons from Somalia, Tadele moved his family to Dodolo in 1980 where he began teaching in the Mekane Yesus Bible School.

1982 began a dark period in the life of Tadele. He was arrested by militiamen and marched to the local police station in Dodola. He was accused of propagating the “metey hayimanot” (a new religion from beyond) and assisting the anti-government Sidama Liberation Front. After several days he was transferred to a secure prison in Adaba where prisoners were severely tortured or killed. Tadele later commented, “Throughout my life, I have never been troubled as on that day. Indeed it was the darkest moment of my life.” He had cause for concern as the chief administrator of Bale Region was none other than Ali Musa, who took delight in prisoner torture and mass killing.  Tadele was interrogated at all hours of the night, “Tell us, why do you propagate this ‘new religion’ and how have you helped the rebels, who are anti-Revolution?” Tadele would respond with the same answer: that he taught about Jesus and that he knew nothing about the rebels. He was then taken to the torture chamber, tied and gagged and the soles of his feet beaten with a rubber mallet until they were shredded.  His body was also severely beaten with a sapling. This questioning and torture continued for several days in an attempt to get Tadele to confess  About one cruel beating that went on all night Tadele later related, “I felt I was in a burning fire. It was the night I experienced hell on earth. The tortures were horrible.  I was beaten so severely and every beating produced more pain. The torturers had no pity in their hearts. In the morning I was unable to walk to the toilet so the guards hauled me there.”

Several months later he was transferred back to the Dodola police station. He was in a better situation as he was no longer tortured and was near his wife and children. But a new trial faced him. He agonized over the question of why God would allow this to happen to him, an innocent person. His wife and children were suffering from sickness and lack of food. And each day fellow-prisoners from the Dodola police station were taken out and shot by command of killer Ali Musa.

After three months in the Dodola police station, he was transferred to the large prison located on the outskirts of Dodola, called the Genale Prison. Here he was incarcerated for over three years. Even though the prison was crowded, Tadele was allowed the freedom to share his faith with Muslims and many non-believers. He became the prison literacy teacher. Through the help of the national Mekane Yesus Church his family received assistance. Two of his sons were sent to the Mekane Yesus Hostel in Yirga Alem where they attended high school.

In 1986 Tadele was finally released from prison and returned to his previous position of teaching in the Dodola Bible School and serving in the local Mekane Yesus Church, which he did for a number of years.  In 1994 he and his wife were transferred to teach in the Bansa District Bible School that served over 200 local churches.  Here he had the opportunity to advance the cause of Sunday Schools.  His axiom was, “If we teach the children well, we can greatly influence tomorrow’s world.”  He was influential in training many Sunday School teachers. He also organized conferences for the younger generation and promoted drama and choirs. In 2003, Tadele and his wife took up residence in retirement in Hawassa, the capital of the Southern Nations Region, after a resilient comeback from prison incarceration.

Bibliography Adaped from Tamrat Tadele, “The Biography of Ato Tadele Debessa,” a term paper presented to the Ethiopian Graduate School of Theology for the course, “Evangelical Movement in Ethiopia,” 2004.

Facebook message from Tirro Tadele, last born of seven children, May 12, 2018, that specified he was still alive in 2018 and had not passed away in 2004, as original source had indicated: “He’s 74. Strong and with full health. Below recent pic with my mom, married for 55 years and children of 7 all alive serving God! with me the last at age 33. Thanks for asking…”

Note: Debessa Tadele is portrayed with his wife of 55 years in the photo.

This article, received in 2014, updated in 2018, was written by Dr. E. Paul Balisky, a former lecturer at the Ethiopian Graduate School of Theology, a DACB participating member.  Paul and his wife Lila now reside in Grande Prairie, Alberta, Canada.