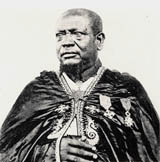 Born around 1844 at Dabra Berehan, in Shawa, 70 miles (112 km) northeast of Addis Ababa, he was educated in eastern Shawa, where he studied theology, and was given the title of Alaqa (dean or chief of a cathedral). He began his career as a scribe at the court of Wayzaro Bafana (q.v.), Menilek’s wife, in the 1870s, and later became one of king’s secretaries. After the royal secretary’s death in about 1876, Gabra Selassé was appointed Tsahafé Teezaz, and became the first Minister of the Pen in 1907. He accompanied Menilek on all his travels and marches, and kept a record of the major historical events. Although his work was first published in French in 1930, the Amharic original was not published until 1966.

Gabra Selassé also assisted the emperor in the reconstruction and administration of churches. Menilek later appointed him head of the St. Mary Church of Addis Ababa in Shawa, with the prestigious title of Nebura’ed, which was originally borne only by the head of the cathedral of Aksum. He died in November 1912, and was buried at the Raguel Church in Entoto, 3 miles (5 km) north of Addis Ababa.