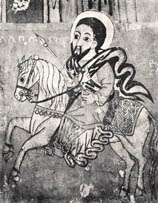 Lalibala (later 12th - earlier 13th centuries) ruled as emperor of Ethiopia from about 1182 to at least 1225, and possibly later. He later became a saint of the Ethiopian Church. According to tradition, he built the 11 rock-hewn churches at his capital, then named Roha but now called Lalibala after him, in Wallo province.

He was the cousin of Emperor Yemreha Krestos, and possibly the son of Emperor Zan Seyum, and thus a member of the Zagwé dynasty which ruled Ethiopia in the 12th and 13th centuries. His father’s name appears as “Shanuda” in the History of the Patriarchs of Alexandria. He was born at Roha, (then in Lasta), at the beginning of the reign of his half-brother, Emperor Harba. His mother called him Lalibala (which appears to signify “Bees have acknowledged his supremacy”) to commemorate an event at his birth when a swarm of bees alighted on him. While still a boy, Lalibala had a vision and claimed that he heard God’s voice telling him to build at Roha - the site now called Lalibala - rock churches which would be more magnificent than those already in Lasta or Tegré. To be able to achieve his end, he had to become emperor.

When he reached manhood, Lalibala became a hermit in the mountains of Tegré to escape persecution from Harba, who feared him as a rival for the throne. There he met his future wife, the devout and gentle Masqal Kebra. About 1180 he is said to have made the difficult pilgrimage to the Holy Land, which had been in the hands of the Crusaders since 1099, and to have experienced personally the dangers and difficulties which Ethiopian pilgrims generally faced on this journey. In the same period Harba sent two missions to Rome, probably in response to the proposal of an alliance which Pope Alexander III (reigned 1159-81) had sent to the Ethiopian emperor in 1177. Alexander believed that in the person of the Ethiopian emperor he had at last discovered “Prester John” (q.v.).

On his return to Ethiopia, Lalibala made a successful bid for power about 1182. Tradition holds that Harba abdicated in favor of his half-brother, acknowledging this to be God’s will. It seems that Lalibala was supported by the Ethiopian clergy, who were doubtless opposed to a Papal alliance. When he became emperor, he was called Gabra Masqal (“Servant of the Cross”). The new emperor then put into practice his Christian ideals of voluntary poverty and charity towards all men, including his enemies, except when forced occasionally to defend the frontiers of the empire which was at this time apparently composed of the areas covered by the present day provinces of northern Eritrea, Tegré, Wallo, and northern Shawa. The main threats to Ethiopia at that time came from the Muslim chiefs in the east and southeast and from the pagan tribes west of the Takkazé river. Within the empire Lalibala had to deal with rebellious factions, including Aksumites and ambitious Shawans. To achieve success he made sure of the support of the monastery of Dabra Libanos, and of Shimezana in Tegré, west of Addigrat, by conferring special privileges on its clergy in 1205 and in 1225. In the south, he took possession of the natural fortress of Amba Geshan in the Amara region of Shawa, and founded a monastery there.

In his relations with Egypt, Lalibala adopted a policy of “peaceful coexistence,” which he believed to be most likely to serve the interests of the Christians of the Orthodox Church in Ethiopia, Egypt, and Palestine, especially since the Sultan of Egypt Salah-ad-Din (Saladin) [ruled 1186-93] had conquered Jerusalem in 1187. The policy was successful, for in 1203, at the emperor’s request, the sultan of Egypt intervened in favor of the Ethiopian monks in the Holy Land. Harmony with Egypt was maintained through an exchange of ambassadors, letters and gifts, and favored commerce, thus ensuring that a new Abuna (head of Ethiopian Church) could be brought from Alexandria when necessary.

Arabic sources state that Lalibala had two sons, Yetbarak (later emperor), and Anab, or Atab. The former is believed to have been the last Zadwé ruler, though Ethiopian tradition states that Lalibala did not wish his son to inherit his throne, and that he was succeeded by his nephew, Emperor Anab. (Succession by brother or nephew, rather than son, was a common phenomenon in the Zagwé dynasty).

The greatest testimony to Lalibala’s fame is the magnificent series of 11 monolithic churches in his capital, shown in the natural rock designs revealed to the emperor from heaven during a vision, according to hagiographic tradition. This complex, including a honeycomb of underground corridors, trenches, stairways, and inner courts, complete with a water system, represents the highest point of the best Ethiopian architectural tradition. It is said to have been constructed under the emperor’s personal supervision. In the mid-1970s, the 11 churches remained places of pilgrimage, and were tended by more than 1,000 priests. Lalibala’s own tomb is in Biet Golgotha, one of the churches.

Abu Salih, Churches and Monasteries of Egypt and Some Neighbouring Countries (translated and edited by B. T. A. Evetts), Oxford, 1895.