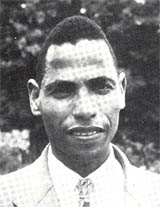 Markina Madero was born in 1924 in Wonche, Wolaitta, Southern Ethiopia. During his early childhood his father, Dana Meja Madero, and mother, Enka Tona, were traditional religion worshippers, offering sacrifices to appease various spirits. In 1935 Markina and his father heard the Gospel for the first time from a small, fiery preacher, probably Wandaro. When father and son indicated that they wanted to become followers of Jesus, Wandaro had them repeat after him, “I now renounce Satan and believe in Jesus Christ. I believe that He died for my sins. I will not worship Satan or sacrifice to his spirits again, but I will follow Jesus and obey Him until I die.”

Markina was an eager disciple and he grew in his faith through the Bible teaching of Gunta and Irasho. Because Irasho had attended the Orthodox Church literacy school and had socialized with the Amhara, he was able to teach Markina, who spoke Wolaitta, the rudiments of the Amharic language. It was not until the mid-1940s that the Ethiopian government and missions began to provide education in the South and the West. During the Italian occupation of southern Ethiopia from 1937 to 1941, Markina opened an Amharic literacy school in Wonche. During those four years, despite having limited supplies, he trained some 250 students. His pen was a sharpened piece of bamboo, his ink was liquid squeezed from the dark blue fruit of the dokema tree, and unblemished cotton cloth was his chalk board.

In 1946, with the assistance of Mr. and Mrs. Robert Thompson, Markina enrolled in the Jimma Miazia 27 Elementary School. Because he made excellent academic progress, he was transferred to the Jimma Teacher Training College. There, a Christian Indian instructor conducted Bible studies for evangelical students who were sent by mission agencies. Another change in his education came about in 1949 when Markina began studies at the newly established SIM Christian Training Institute in Addis Ababa. This two-year theological program further established him in the Christian faith and enhanced the skills he needed for ministry.

When he returned to Wolaitta in 1951, he was hired by the Sudan Interior Mission (SIM) to teach in their newly established elementary school at Soddo. Because the SIM was unable to pay a salary commensurate with his own schooling, in 1952 he applied for a teaching position with the Norwegian Lutheran Mission (NLM) at Yerga Alem. During his time with the NLM he was able to use several of his God-given gifts: teaching, evangelizing among the Sidama people, and pastoring the newly established Yerga Alem church. With encouragement from his father, he married Genet, a young Wolaitta woman who had been trained by Miss Selma Bergsten, an SIM missionary. Their wedding, held at Wonche, was a joyous celebration of singing, preaching, and feasting, attended by many friends from near and far, as well as the SIM missionaries residing at Soddo. In1955, Markina had an unusual opportunity. Together with about ten Lutheran delegates from Ethiopia, he was invited to attend the Lutheran World Federation meeting that was to be held in Arusha, Tanzania. This was Markina’s first time to fellowship with Christian brothers and sisters from many countries of the world. He experienced the reality of Galatians 3: 28, “There is neither Jew nor Greek, slave nor free, male or female, for you are all one in Christ Jesus.”

Because of the growth and development of the Wolaitta Kale Heywet Church (WKHC), the leaders put pressure on Markina to return and assume the responsibility of being General Secretary of the WKHC, with the additional responsibilities of teaching in the Soddo Amharic Bible School and the Wolaitta conference ministries, in January and February. He returned to Wolaitta in 1957 and served faithfully until 1884, but not without testing, trials, and opposition in his ministries. In 1984, the Marxist revolutionary government closed all 680 local Wolaitta churches.

In 1965 Markina was invited to accompany Aba Gole, a respected leader of the Kale Heywet Church (KHC) to the USA, Canada, and Nigeria to tell the story of God’s work in southern Ethiopia. Initially, Markina hesitated because he felt that his limited English made him incapable of speaking to church audiences. He prayed, “Dear Lord, if you are to send me, you make it clear to me what I will say to the people so they can understand me. And I’ll need the same help if I’m to translate for Aba Gole, who speaks no English.” He was given courage by meditating on Matthew 19:26, “With man this is impossible, but with God all things are possible.” He was impressed with American technology but very disappointed by the racial discrimination. When Markina returned to Wolaitta he was a strong advocate for launching Sunday Schools in each local WKHC.

Another wonderful opportunity presented itself to Markina in 1974, as he was able to attend the Lausanne Conference in Switzerland, with over 4,000 people in attendance. The theme of the two week day conference was, “Let the Earth Hear His Voice.” Markina returned home with a renewed zeal for evangelism within Wolaitta, and he was also eager to have Wolaitta evangelists go out to the unevangelized.

In 1991 Markina Madero and Kedamo Mechato were sent by the KHC and the SIM to visit churches in the USA, Canada, Scotland, and England. Even though they had many opportunities to share the exciting expansion of God’s Kingdom in Ethiopia, they were puzzled that many of the churches in the West, who initially brought them the Good News, now seemed to have lost their zeal for God. Markina was pleased to visit Prairie Bible Institute in Three Hills, Alberta, Canada, a school that sent many missionaries to Ethiopia and around the world. A highlight of his visit to Toronto was being able to attend People’s Church, which was founded by Oswald Smith, and which continues to financially support hundreds of missionaries.

Together with other WKHC language experts, Madero assisted Dr. Bruce and Mrs. Betty Adams in translating both the New Testament and later the Old Testament into the Wolaitta language. This was an arduous task that took nearly thirty years to complete, but it was a crowning achievement for Madero and his coworkers.

Markina passed to glory on November 6, 2007. Because he was so well known throughout southern Ethiopia, his funeral was attended by over 8,000 people, both friends and family. Through trials as well as through times of advancement of the Gospel, he served his Lord with joy, patience, kindness, and love to all.

Markina Meja, Unbroken Covenant with God: An Autobiography in the Context of the Wolaitta Kale Heywet Church, Ethiopia. Belleville, ON: Guardian Books, 2008.

This biography was researched and adapted from “Wolaitta Evangelists: A Study of Religious Innovation in Southern Ethiopia, 1937-1975,” by E. Paul Balisky (University of Aberdeen Ph.D. Thesis, 1997, pp 157-160). Dr. Paul Balisky is a former lecturer at the Ethiopian Graduate School of Theology, a DACB Participating Institution.