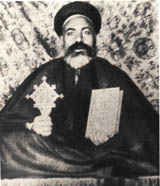 Born at Fiché, in the north of Shawa, he is popularly reputed to have been the son of Dajazmach Tassamma Darge, a local nobleman, and of a daughter of the chief Ras Gobana Dachi (q.v.). He was educated at the monastery of Dabra Libanos, where he was known as Abba Hayla Maryam. Strongly religious, he remained at Dabra Libanos to become a monk. He also visited several other Ethiopian monasteries and places of learning.

He subsequently became the father confessor of Dajazmach Tafari, later to become the Emperor Haile Selassie (q.v.). The Ethiopian Church in those days obtained its bishops from the Coptic Church in Egypt, but on the death in 1926 of the renowned Egyptian bishop Abuna Matewos (q.v.), Tafari succeeded in having four Ethiopians ordained as bishops in Alexandria. One of them was Abba Hayla Maryam, who took the episcopal name of Pétros, and was appointed to serve in the district of Manz, in Shawa, and in the province of Wallo. He spent most of his time in Dassé, capital of Wallo.

After the Italians over-ran northern Ethiopia in late 1935 and early 1936, Pétros joined the Patriot forces led by Dajazmach Abara Kassa (q.v.), who attacked Italian-occupied Addis Ababa on July 28, 1936. After fierce fighting, Abara Kassa was obliged to retreat, but Abuna Pétros was captured by the Fascists, who on July 30 tried the bishop publicly in Addis Ababa. Abuna Pétros, who behaved throughout with remarkable dignity, heard his sentence standing and holding his cross in his right hand. He then walked solemnly to the nearby market, his place of public execution, where he was shot down by eight Italian carabinieri (members of the Italians national police). The execution, which stunned both the Ethiopian public and their Fascist oppressors, did much to stiffen Ethiopian Patriot resistance, and was for a time kept a secret in Italy. After the liberation of Ethiopia in 1941, the bishop’s martyrdom was the subject of tow Amharic plays.