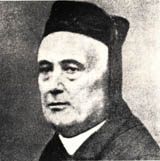 Giuseppe Sapeto (l811-August 24, 1895) was an Italian Lazarist missionary (i.e. a member of the mission to the poor founded in Paris in 1625 by St. Vincent de Paul), an orientalist, author, and political agent, who acquired the Red Sea port of Assab for Italy.

Born at Carcare, Genoa, he became a Lazarist missionary at the age of 18. He travelled to the Lebanon and Egypt before sailing to Massawa in 1837 with the French brothers Antoine and Arnaud d’ Abbadie, who were to spend ten years (1838-48) travelling in Ethiopia. He went inland, visited Adwa and Gondar, and later joined the mission of the Italian Lazarist Monsignor Giustino de Jacobis. He fell seriously ill, however, and returned home. After recovering, he returned to Massawa as a traveler rather than as a missionary, visited the Danakil salt depression, and, in company with his compatriot, Father Stella, visited the country of the Bogos, Mensa, and Habab in northwestern Ethiopia in 1851. During these travels he collected Ge’ez (ancient Ethiopic), Tegré, and Bilan (a Cushitic language of western Eritrea) vocabularies.

In 1858 he was sent to Europe by de Jacobis as interpreter to a mission which Agaw Negussé, a rebel against Emperor Téwodros II, had dispatched to the Pope and to Emperor Napoleon III (reigned 1852-70) of France. Sapeto returned with the latter’s envoy, Count Russel, who had instructions to obtain concessions and a port for France. He failed in his mission, however, when Téwodros defeated and killed Negussé. The emperor took Sapeto prisoner, but later released him. Sapeto then went to Paris, where he became curator of Oriental manuscripts at the Bibliothèque Nationale in Paris, and subsequently professor of Arabic at Florence and Genoa.

After the opening of the Suez Canal in 1869, Sapeto was entrusted by the Italian government with the task of obtaining a port on the Red Sea coast of Africa. Acting on behalf of an Italian shipping company, the Società Rubattino, he purchased the port of Assab in November 1869 from two local Danakil chieftains for 6,000 Maria Theresa dollars. He returned to Assab in March 1870 to conclude the agreement, and purchased two further strips of territory. He later conducted a vigorous polemic against critics of these purchases, notably in his book Assab e i soui critici (1879).

The Italian government, by then desirous of bringing its nominal possessions at Assab under effective control, ordered Sapeto to return to Assab, and he arranged for the signature by the local chiefs of further agreements, notably one with the Sultan of Raheita, 30 mi (48 km) southeast of Assab, who, in September 1880, placed himself under Italian protection. Sapeto, who also attempted to open up contact with Muhammad Hanfari, the Sultan of Awsa in the south of the Danakil region, remained at Assab until January 1881. On his return to Italy he gradually dropped from public view. A man of scholarly interests as well as political ambition, he had attended the Fourth International Congress of Orientalists in Florence in 1878, and produced a number of learned writings, including Etiopia, a study of Ethiopian government, geography, and history, published in 1890. He died in relative obscurity at Genoa in 1895.