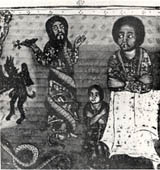 Emperor Susneyos (circa 1571 to September 16, 1632) reigned from 1607-32. He was a strong ruler who imposed his authority on a divided realm. But after he had proclaimed Roman Catholicism to be the official religion of Ethiopia in 1622, rebellions occurred, so that the Ethiopian Orthodox Church was restored and the emperor obliged to abdicate ten years later.

Susneyos was the son of Prince Fasilidas, and great-grandson of Emperor Lebna Dengel (q.v.) [reigned 1508-40]. His mother, Wayzaro Hamalmal Warq, was the daughter of a provincial chief. He was brought up at his father’s residence in Gojam. While he was still a child, Gojam was attacked by the non-Christian Galla, who had begun invading Ethiopia from the south 50 years earlier, and were now posing a serious threat to the country. They killed Prince Fasilidas and a number of others. One of the Galla carried off the infant Susneyos, and treated him as his own son. A year later he was released by Dajazmach Asbo, and entrusted to the care of the Dowager Empress Adems-Mogassa, who supervised his early education. When he was old enough, he was sent to his father’s lands in Gojam, where he learned to fight and to hunt.

After the death of Emperor Sartsa Dengel (q.v.) [reigned 1563 to 1597], and the accession of his young illegitimate son Yaeqob (reigned 1597-1603), also known as Malak Saggad II, the fortune of Susneyos changed. He was now a possible claimant to the throne, and as such a threat to the ambitions of the chief nobles of the realm who hoped to exercise power themselves during the young king’s minority. To escape from them, Susneyos took refuge in Gojam and Shawa. He had to lead the wandering life of a bandit prince, with a few faithful followers. In September 1603, Emperor Yaeqob, whom the nobles disliked because he showed signs of independence, was exiled to Enarea, and another cousin, Za-Dengel (reigned September 1603 to October 1604) succeeded him briefly. Throughout this period Susneyos refrained from claiming the throne, but merely asked for the return of his father’s “Gult”, or feudal estates, in Gojam. After Za-Dengel’s death on October 24, 1604, Susneyos sent a message tot he leading nobles, asking to be recognized as emperor. Ras Atenatewos, son-in-law of Emperor Yaeqob, and others proclaimed him king on December 14, 1604, but another group of nobles, led by Za-Selasse, who wished to become viceroy of Gojam, rejected him, and sent for the exiled Yaeqob. The stalemate continued for the next two years until, on March 10, 1607, Susneyos fought a decisive battle against Yaeqob at Gol in Gojam. Emperor Yaeqob was killed, but his body was not recovered. This afterwards led to the appearance of several impostors claiming to be Yeaqob.

After the battle of Gol, Susneyos became the undisputed ruler of Ethiopia, with the throne name of Seltan Saggad. He was then about 35, and was described by contemporary observers as a handsome, well-built man, intelligent and well-read, and an outstanding horseman, warrior, and military commander. He became emperor after Ethiopia had been ruled for some years by a clique of nobles, and he therefore decided to establish his authority firmly. To achieve this end, he replaced former governors and administrators with his own relatives and faithful supporters, like his half-brothers Ras Se’ela Krestos (q.v.), Dajazmach Hafa Krestos, Ras Yamana Krestos, and Malkea Krestos. But his reign was full of troubles. He had to struggle constantly against the intrigues of discontented nobles and dignitaries who revolted against him, including several of his own relatives and followers whom he had elevated. He also had to face uprisings by the non-Christian peoples of Ethiopia. He fought relentlessly against the Agaw of Gojam and the Falasha of Semén, both of whom constantly harassed the imperial forces, and repelled numerous assaults by the Galla, who had made considerable inroads into the kingdom from the south and east, and who posed the greatest threat to the empire’s stability. Susneyos also concluded campaigns as far as the Atbara and Taka rivers, the Danakil region, Enarea, and Sarki in the kingdom of Sennar, in what is now the Sudan.

But Susneyos’ major problem was religion. This was the period when Portuguese catholic influence was greatly feared by the Ethiopian Orthodox Church. The Emperor Za-Dengel had already been deposed for being pro-Catholic. From the first years of his reign, Susneyos also showed great sympathy for Roman Catholicism, which he later publicly embraced and proclaimed as the official religion of Ethiopia in 1622. While it is certain that Susneyos hoped for military assistance from Portugal to enable him to repel the encroaching Galla and perhaps secure skilled craftsmen and artisans, it is apparent that he also sincerely liked Roman Catholicism. His religious policy led inevitably to bitter resentment among the clergy and adherents of the Ethiopian Orthodox Church, culminating in increasing hostility between opposing factions, and ultimately to civil strife and the downfall of Susneyos. But before these events took place, he and his brother Se’ela Krestos had caused to be baptized into the Catholic faith large numbers of the non-Christian tribes in Ethiopia, including many of the Agaw of Gojam, the Wayeto of Lake Tana, and the Waranesha Galla.

With the help of the Portuguese Fathers, Susneyos constructed several stone churches near Lake Tana, a two-storied residential palace, and a bridge over the River Abbay (Blue Nile). These enterprises won him fame and laid the groundwork for the remarkable building achievements of his son Fasilidas (q.v.) [reigned 1632-67].

When the Roman Catholic Patriarch Affonso Mendez arrived in Ethiopia in 1624, religious conflicts entered a new and bitter phase because of the Patriarch’s intransigence, and culminated in widespread rebellions in the provinces. Susneyos himself undertook a campaign to enforce Lasta’s submission, and after suffering one of his rare military setbacks, defeated the rebels in one battle. On his return to Danqaz, 12 mi (20 km) southeast of Gondar, some of the leading personages in the kingdom begged him to abandon his pro-Catholic policy because the revolts and civil wars resulting from the change in religion were ruining the country. Finally submitting to their pleas, and to those of his wife, Empress Walda Saala Seltan Mogassa, as well as of his eldest living son, Fasilidas, Susneyos proclaimed the restoration of the Faith of Alexandria on June 24, 1632. He died a few months later, at Danqaz, on September 16, 1632, a broken-hearted man, but a staunch Roman Catholic. He was buried with great pomp and ceremony at Gannata-Iyasus, the church built for him by Father Pedro Paez near Azazo, close to Gondar.