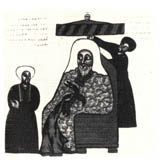 St. Täklä Haymanot, the most revered saint in Coptic Ethiopia, was a critical figure in establishing Ethiopian national identity. He was instrumental in “restoring” the Solomonic dynasty and revitalizing monasticism, which were central to both religious and cultural life.

Täklä came from a priestly family but chose to enter a monastery rather than become a parish priest. After twenty years of study and solitude, he acquired great personal prestige. With a small band of disciples he began an extensive missionary effort that culminated in the founding of a monastery that later became Debra Libanos, the most influential center of Christianity in Ethiopia. Debra Libanos extended its influence over most other monasteries in the Ethiopian Empire and, as abbot, Täklä became the most powerful religious figure in the country. Because the abuna, or head of the church, was always an Egyptian, the abbot of Debra Libanos was the highest-ranking native clergyman. So important was Debra Libanos that the emperor personally named its abbot from a slate elected by the monks. Täklä’s missionary effort created a buffer between the Coptic Christians and the encroachments of Islam; it is one major reason why Ethiopian Christianity survived while that of neighbouring Axum and Meroë faded.

Beyond these facts, Täklä’s history becomes lost in the mists of religious legend. The elaborate hagiography itself, however, marks the emergence of Amhara-language literature, in which he appears as a miracle worker. Täklä is credited with defeating (and converting) Motalami, the major traditional Ethiopian ruler of the period. Moreover, Täklä is considered the instrument of the archangel Michael in establishing the Solomonic monarchy. Whatever his direct role, Täklä was involved, playing a conciliatory role in ending the Zagwe dynasty (1137-1270) and restoring rule that styled itself as the Solomonic dynasty, which claimed direct descent from the mythical liaison between Solomon and the Queen of Sheba. The Zagwe kings were deeply religious, and many were priests. The Solomonic kings favored monks over the parish clergy and were rarely devout. Täklä, and later his disciples, founded monastic society in Ethiopia; thereby, power, education, and wealth accrued to them rather than to the institutional church.

This article is reproduced, with permission, from *An African Biographical Dictionary, *copyright © 1994, edited by Norbert C. Brockman, Santa Barbara, California. All rights reserved.