Yaréd, the Deacon, was a writer and musician who became a saint of the Ethiopian Church. Born near Aksum, he was the son, according to oral tradition, of Enbäräm and Täwleya, and was educated by a kinsman, Abba Gédéwon, or, according to another tradition, by Zä-Mika’él ‘Arägawi or some other of the Nine Saints. A faulty pupil, Yaréd was unable to memorize the Psalter. He went out to the desert to the tomb of Ebnä Hakim and witnessed the repeated attempts of a caterpillar to climb a tree, which it eventually did. Impressed, he returned to his teacher, his memory improving miraculously. He became a deacon at the church of Mädhané-Aläm, and became Ethiopia’s first composer of church music. The royal family were particularly moved by his songs, but Emperor Gäbrä-Mäsqäl allowed him to go to the land of Sällämt, beyond the Täkkäzé river, as a hermit; some say he retired with many disciples to the Semén mountains, where he died on 11 Genbot (19 May) and where, according to his gädl, he was buried.

Yaréd stated in his collection of hymns, “Mäzgäbä Degwa,” that he learned this music from God. Previously it seems that the liturgies and chants had been murmured in a low voice; Yaréd introduced the three modes, ge’ez, ‘ezel and araray, which, like the hymns, which cover the whole year, are still used in the Ethiopian Church. His book also lays down the principles of education, acknowledging the need to adjust teaching to the slow development of a young intellect, and pointing out that a teacher should not only guide his students to knowledge, but must also divert them from idleness, if necessary with a stick. Yaréd is said to have received the Hymns of Mary at a meeting at May Kérwah, near Aksum, from the “Potter of Syria,” Simeon of Geshir; while this is somewhat unlikely, there appears to be a strong Syriac influence in much that is attributed to Yaréd. 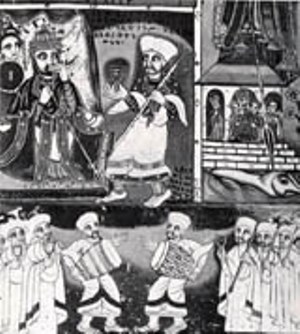