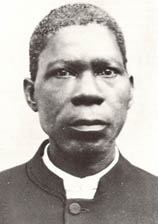 Andreas Aku, a notable clergyman, theologian, and author, became the first indigenous head of the Ewe Presbyterian Church in 1922. He was one of the most outstanding personalities produced by the Bremen (North German) Mission, which was active on the east bank of the Volta River from 1847 until World War I.

Born at Adaklu in 1863, Aku attended the Bremen Mission school at Waya, about 50 miles (80 km) northwest of Keta in what is now southeastern Ghana, as well as the seminary at Anyako, on the west bank of the Keta Lagoon. He began teaching in 1882. Between 1884-87 he underwent three years of Christian theological and teacher training in Germany.

Upon his return he taught at Keta, where he exhibited remarkable ability. In 1895 he was selected to open a new mission station at Lomé, now the capital of the Republic of Togo. This was a challenging assignment, since he had to work under the scrutiny of German colonial officials. He performed most creditably, however, and in 1910 was ordained a pastor at Lomé. Working hard to extend the church’s missionary and educational work, he also collaborated with others in the first complete translation of the Ewe Bible, and in the preparation of other religious works. He also wrote some biographies, and translated John Bunyan’s Pilgrim’s Progress into Ewe.

He took an active part in the civic life of Lomé, and after the expulsion of the German missionaries during World War I, he became the obvious choice to head the Ewe Presbyterian Church. The first synod of the church in both the British and French spheres of Togo was held under his leadership in 1922. Aku and his associates sought to retain the unity of the church and to expand its work, despite the division of Togo into British and French-administered zones. Upon Aku’s death in 1931, the governor of French Togoland paid tribute to him as a “complete man, a great patriot, and a prince among men.”