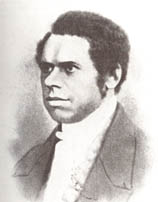 Thomas Freeman was a British Methodist missionary to West Africa. He was born in Twyford, Hampshire, England. Little is known of his early life. His mother was English, his father and African freed slave. When he was accepted as a Wesleyan Methodist missionary in 1837, he had been head gardener on a Suffolk estate but had lost his post because of his Methodist activism. In 1838 he arrived in Cape Coast, Gold Coast (Ghana), where a Methodist church of indigenous origin was being tenuously supported by a succession of short-lived English missionaries. Freeman was unusual in surviving, despite a strenuous program. In his early months he built a church in Cape Coast, extending preaching and schools along the coastal plain, and identified a young Fanti preacher, William de Graft, as a suitable minister. He then made his way to Kumasi, capital of Ashanti, forming a promising relationship with the Asantehene and other important chiefs. In 1841, taking de Graft with him, he visited Britain to appeal for funds and recruits for the expanding work. The publication of his Kumasi journals made him a celebrity, and the then-current popularity of the African vision of T. F. Buxton favored his success. He returned with more missionaries, revisited Kumasi, and finding still greater promise, left a missionary there. Meanwhile some Yorubas who had become Christians in Sierra Leone and had made their way back to their homeland, had asked the Wesleyan minister for help. Freeman, again with de Graft, went to investigate. He had a cordial meeting with the Egba paramount Sodeke at Abeokuta, and on his own initiative he established a mission in Yorubaland, first at Badagri, with de Graft, later at Lagos, and eventually at Abeokuta. He never, however, obtained the resources for the large-scale mission he envisioned. He several times met Ghezo, the powerful king of Dahomey, and placed a preacher at Ouidah, but he could neither persuade Dahomey to abandon a slaving economy nor persuade his mission to underwrite evangelistic efforts there. Missionary mortality in the Gold Coast continued, deteriorating relations between Britain and Ashanti clouded the Kumasi mission, and tensions arose with his home committee over finance. In 1857 charges of overspending forced his resignation as general superintendent. To repay what had exceeded the budget, he took the thankless government post of civil commandant of Accra but was dismissed by a new governor in 1860. He remained in the Gold Coast, farming, writing, and preaching; he married a local woman in 1854 (two previous wives had died soon after their respective arrivals in Africa). In 1873, at age 63, he reentered the Wesleyan ministry and became an active and innovative pastor, prominent in revival movements and skilled in conciliation.

Freeman was limited linguistically, and as he fully recognized, financially incompetent. But in forging relationships with African rulers, he was preeminent, and he also worked well with the more farsighted of British officials. His vision, tact, humanity, energy, and durability underlie the now substantial Methodist presence in Ghana, Western Nigeria, and Benin.

Thomas Freeman, Journal of Various Visits to the Kingdom of Ashanti, Aku, and Dahomi in Western Africa (2d ed., 1843, with a new introduction by H. M. Wright, 1968), and Missionary Enterprise No Fiction (a semi-autobiographical novel; 1871).