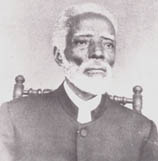 Reindorf was born into a Ghanaian trading family in Accra that had some intermarriage with Danish officials and merchants. Trained by the Basel Mission (BM), he became a teacher, and later pastor, in the Basel Mission church in Ghana. He was the first African to publish a full-length Western-style history of a region of Africa. The background to this work is obscure, but Reindorf was partly inspired by the linguistic and publishing work of his BM colleague J.G. Christaller, who worked on oral tradition during his time in Ghana in the third quarter of the nineteenth century. Reindorf interviewed more than 200 people of both sexes in assembling his history. Unfortunately, both Reindorf and his Church Missionary Society pastor colleague in Yorubaland, Samuel Johnson, who published the pioneering history of the Yoruba, have been ignored in the second half of the twentieth century. Reindorf’s career with the BM is little known, but family records indicate that he was well respected for his healing powers, and the BM archive suggests that he was well able to articulate an independent line over against the missionaries when he felt this was necessary.