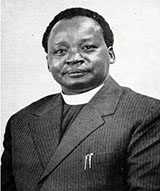 Marclus Mark Itumu was born on August 10, 1936 at Kerwa village, Mavuria Location in Mbeere South Sub-County, Embu County to Mr. Maringa Njamwea and Mrs. Mbeti Maringa. He became the shepherd of his father’s flock at the very young age of eight. Since he was not able to go to school because he spent most of his time taking care of their flock, his uncle, who was privileged to go to school, taught Itumu how to read and write especially in the evenings. This awoke in Itumu an interest in school life and lead to his enrollment in Nyangwa Primary school in 1949 at the approximate age of thirteen.[1] A year later, he joined Nyangwa Anglican Church and after rigorous catechism classes, he was baptized by Rev. Ezekiel N Mwige on June 9, 1957 and given the name Marclus Mark.[2]

In 1958, he joined St. Mark’s Teacher Training College Kigari to be trained as a teacher. It was while he was student at St. Mark’s that he was confirmed by the Rt. Rev. Obadiah Kariuki, the bishop of Mount Kenya Diocese at Emmanuel Church, Kigari on November 11, 1958.[3] He remained a very committed Christian at his local church in Nyangwa.[4]

On January 4, 1964, Itumu married Mary Muthoni in a wedding ceremony that was solemnized by Rev. Leonard Mwaura Mbogo at St. Luke’s Kirima Anglican Church. On May 4, 1965, they were blessed with their only son, John Muriithi who is currently (2019) an Anglican priest serving in the the Diocese of Southwark, United Kingdom.[5]

It was while he was teaching at Kirima Primary School that Lord called him to join the ordained ministry. He was convinced that the Lord was calling him to leave his teaching career and join Theological College to train as a priest.[7] His inspiration, according to his personal memoirs, came from Isaiah 6:8 that says “. . . and I hear the voice of the Lord saying ‘Who shall I send and who will go for us?’”[8] He applied for ministerial training, and upon recommendation by the diocese was offered a place at St Paul’s United Theological College, Limuru in January 1964. Interestingly, it was while in college that he gave his life to Christ. On January 14, 1964, a week after reporting to St. Paul’s United Theological College as a new student, Itumu gave his life to Christ.[9]

Itumu trained for the sacred ministry from 1964 to 1966. Upon graduation from St. Paul’s in 1966, he was made deacon on January 29, 1967 at St. James and All Martyrs Cathedral, Muranga by Bishop Kariuki. On February 4, 1968, he was ordained priest at Emmanuel Church, Kigari, where he was serving.[10] In 1973, Itumu secured a one-year scholarship from the World Council of Churches (WCC), through the National Council of the Churches of Kenya (NCCK) to study for an Advanced Certificate in Christian Education at Westhill College, Birmingham, United Kingdom.[11] This was a great achievement as the clergy were not known to go for higher studies. He thus became the first Anglican clergyman in Mount Kenya East region to go for higher theological training.[12]

In 1979, he won a three-year scholarship to join the University of the South Tennessee, USA for post graduate studies. He completed his studies in 1983 and obtained a Master of Divinity (M.Div) degree.[13] This is a clear indication of someone who valued education and particularly theological studies.[14] He was the appointed as a tutor and Principal of St. Andrew’s College of Theology and Development, Kabare, by Bishop David Gitari, the bishop of Mount Kenya East Diocese at the time.[15] He did the work of training clergy and evangelists so passionately that, to this day, those who knew him associate him with development of church leaders than anything else.[16]

Ecclesiastical Appointments and other Service to the community

Itumu served in many parishes before his death, including Kabete, Embu [17], Limuru, Ngenge [18], and Kabare. [18a] While serving in Kabare Parish (January1976 to 1977) in Kirinyaga County, he had the added responsibility as the Rural Dean for Kirinyaga Deanery. In the same year (1977), he doubled as the Principal of St Andrews Bible School. Following the sub-division of the large Kirinyaga deanery, he was appointed the Rural Dean of Kirinyaga East Deanery from1979 to July 1983. In 1984, he was appointed the Archdeacon of Kirinyaga Archdeaconry and Vicar of Kerugoya Parish (Now Cathedral Parish of Kirinyaga Diocese), a position he held up to December 1986. From January 1987 to March 1989, when he met his death, he was Vicar of his home Parish, Ngenge and the Archdeacon of his home Archdeaconry of Nyangwa, in the present Mbeere Diocese.[19]

Besides his pastoral duties, Itumu served the Church in many other capacities. For instance, while he was the Vicar of Kabare Parish, he was appointed as an honorary Principal of the then just started St. Andrews School for Mission and Evangelism, Kabare from January 1979 to August 1979.[20] Towards the end of 1979 he was appointed the Education Secretary for Anglican sponsored schools in Embu District.[21]

As far as community service is concerned, Itumu was involved in the establishment of many schools some of which he was the member of the Board of Governors. For instance, he served as a member of the Board of Governors in the following schools- Kijabe Boys and Girls High School, Mary Leakey Girls’ High School, Kirangari Boys’ High School, Uthiru Boys’ High School, Nyangwa Secondary School, Mutige Boy’ Secondary School, Kangaru High School and Ngenge Secondary School.[22] Between 1971 and 1973, he worked as a sponsor of the Protestant Schools in Embu District. He as so concerned with social gospel or community development that, in his Personal Memoirs, he opines that, “Wherever I go to work I try to help other people—not necessarily our fellow Christians but others who will become Christians in the future. I believe in the holistic Gospel.”[23] Until his death in 1989, Itumu was a member of the District Development Committee of Embu District.[24] Canon Jeremiah Njogu and Canon Peter Karanja who served with Itumu in Mount Kenya East Diocese affirm that he was tirelessly involved in advocating for the people’s rights, capacity building, training of individuals and development of institutions and infrastructure. For instance in every parish he went, he built new churches and completed the old ones. He also started many new congregations.[25]

A Great Teacher, a Devoted Evangelist and a Responsible Leader

As we gathered information on this legendary servant, we wanted to know how those who knew him perceive him. To many he was a devoted evangelist, a great teacher and a responsible leader. Those who come from Embu regard him as “Their bishop who never lived to be.”[26] His concern for evangelistic work is notable in his personal memoirs where he says,

We used to visit other Christians in their homes and have prayers with them. At other times, we used to hold open air meetings and witness our Lord there. From time to time, we had a big gathering of parishioners to preach the gospel too. We had many missions within our parish and we would invite preachers to go with us out for mission work. We had the youth movement, mothers union, revival fellowships and Sunday school rallies once a year.[27]

To Canon Karanja, Itumu was a man who inspired the lives of many people with love and sacrifice for all. He nourished, tended to, and fed people he interacted with, either directly or indirectly. He was a charismatic evangelist who moved from one village to another preaching the word of God and praying for the people.[28] Peter Kangethe affirms that Itumu and his evangelists used to go round preaching and praying for all people he met in the urban and rural areas of Murang’a, Kirinyaga, Kiambu, and Embu where he served.[29] According to John Kibanga, Itumu’s favorite song was “Ngombo maita ngombo no ngombo, Jesu okire kwohora ngombo” (“A slave multiplied by a slave is a slave, but Jesus came to the set the slaves free”). He therefore always emphasized that his major mission was to let all the people whom he met know that “Jesus came to seek and save the lost (Luke.19:10), and that all are lost since we have all sinned and fallen short of God’s glory (Romans 3:23).”[30]

Canon Karanja uses the terms “transformational” and “servant hood” to describe Itumu’s leadership style.[31] In other words, he was a responsible leader. J. N. K Mugambi and C. Stuckelberger aver that a responsible leader is the one who is responsive to the needs, concerns and interests of those whom he or she is leading.[32] Itumu was such a leader. He expressed a servant’s attitude and he desired to enrich the lives of those whom he led through unselfish servanthood. He expressed servant leadership through an authentic humility that serves others and leads them to become servants as well. As a result, he was able to renew institutions and create a more caring and compassionate society.[33] Itumu was a leader who always wanted to serve and nothing could stop him from doing this.[34] His plainspoken manner, respect, love, sacrifice, and time-keeping earned him much respect from his colleagues, seniors, and parishioners.

He was a great teacher of the Word of God who taught and preached the message of salvation with simplicity, courage and the power of the Holy Spirit, thus touching the hearts of many.[35] He was a firm believer in encouraging and growing the ministries he found in the congregations and parishes he served. This caused the departments of his parish and Archdeaconry such as the Mothers Union, Kenya Anglican Youth Organization (KAYO), Sunday school and Men’s Fellowship (Today known as Kenya Anglican Men’s Association (KAMA) to grow rapidly.[36] He was also very keen on mission, evangelism and stewardship. On stewardship, he was a great inspiration behind new building projects, schools, health centers, vicarages, and church buildings. He clearly gave his life to serving God holistically as a priest. The itinerary nature of parochial ministry meant that he was away from his home for more than 20 years. Only in his last two years, when he was posted to his home Ngenge Parish and home Nyangwa Archdeaconry, did he really settle down and begin to build a permanent home for his family. He was however not to see its completion as he died soon after.[37]

Itumu died during the Holy week of 1989. His death was mysterious in that he had not shown any sign of sickness. As usual he had a very busy 1989 Easter schedule where visited all the congregation of his parish administering the Holy Communion to his Christians. The climax was to be on Good Friday on March 23, 1989 at the Parish center in Ngenge. He finished the service well, but in the evening he developed a severe headache which got worse by Saturday morning. Later in the day, he was rushed to Kangaru General Hospital in Embu and having shown no signs of improvement he was transferred to Aga Khan Hospital, Nairobi where he died on Easter Sunday, March 25, 1989 at the age of 53.[38]

This article, received in 2019, was written by Dr. Dickson Nkonge Kagema and Rev. Peter Wambugu Murithi. Dr. Nkonge is a Senior Lecturer in Religious Studies and Philosophy at Chuka University in Kenya and a Research Associate in Practical Theology and Missiology at Stellenbosch University, South Africa. He is a Canon in the Anglican Church of Kenya. Rev. Murithi is a Chaplain with Kenya Prisons. He is a PhD Student at Chuka University.