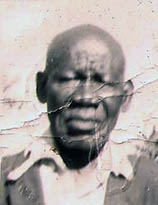 James Kivairu was one of Africa’s early Christian converts, born in the late 19th century. This biography seeks to fill a gap in the history of the early work done by the ELIM missionaries who came to evangelize Africa in the early 20th century. The work of some of the early European protestant missionaries such as Dr. David Livingstone and C. T. Studd is well known but there were other less known missionaries like Roy Hill and his co-workers who sacrificially poured out their lives as a drink offering in the service of our faith. One such early church worker was the Reverend James Kivairu.

James was born in 1886 in Endeli village (Maragoli), Western province, Kenya. He was the oldest son of Luyai, the oldest of ten children, eight boys and two girls. James Kivairu’s father was called Ligikolo, later nicknamed Luyai because of his pride. His mother was called Osagi. His ethno linguistic group was Maragoli, a subset of the Luhyia tribe and his kinship group was the Avakirima.

James had only one wife, Loise Kadenyi, who served with him until they were parted by death. They were married in October 1921. The wedding was held at the Quaker church, Friends African Mission (FAM), Kamusinga. Together they had ten children, six of whom died in infancy. Four sons survived: Simeon Indiazi, Zablon Luyai, Ezekiel Mafoli, and David Arthur Akoto, as well as many grandchildren.

James received his education at Mbale Sector school between 1913 and 1916. After completing his lower level education, he held a number of secular careers before entering ministry. Soon after school in 1916, he worked as a cook in Eldoret. This is the same year he received his first identity card. He later on joined the East African Railways working as a supervisor between 1922 and 1924. He quit to start his own business in 1925 and owned shops and grinding mills driven by water at Kiringiri and Sigalagala, Maragoli.

James’s given name was Kivairu. His baptism name was James and later on in his ministry he was fondly nicknamed Agulu which means “special cooking pot or an earthen vessel” when direct translated from the Luo language group. This nickname was given to him by the local people because the gospel that he preached was able to transform lives for the better. This was particularly significant because of the ongoing tribal conflict in the areas where he ministered. As he preached the gospel, groups of people who were initially adversaries would start coming together in peace for the betterment and development of their community.

James Kivairu was converted to Christ in 1913 while fellowshipping at Friends African Mission (FAM). In 1940 he moved from FAM to ELIM Missionary Assembly (EMA) which is now known as the Pentecostal Evangelistic Fellowship of Africa (PEFA). He was the first African pastor to work at Bukuria mission with Roy Hill and his wife Theresa, the pioneer ELIM missionaries in Kenya. As he knew Luhyia, Luo, Kisii, Kiswahili, and Kuria, he helped in the work of translation.

Calling and Ordination to ministry

Kivairu worked with various missionaries including Roy Hill and John Kins from 1940 on in Bukuria Mission (Taranganya). Kivairu answered the call to ministry and in 1941, he moved from his home area in Maragoli to minister in Bukuria. The initial meeting between Kivairu and Roy Hill was purely coincidental. Kivairu had left his home in Maragoli to seek out his long lost brother, Thomas Umwungu, who had left home without notifying the family. After about two years word came that he was seen in the town of Kisii. When Kivairu arrived in Kisii he was told that Thomas had moved to Kuria. He finally found his brother in Kuria. Since it was Saturday night, Kivairu asked his brother if there were any places of worship in the vicinity. His brother told him about a white man who was trying to evangelize the area and had just finished building a church. The following day, Kivairu attended the church service there. At the end of the service he left to go back to his brother’s place but the pastor followed him and introduced himself as Roy Hill. Roy asked Kivairu to become a co-worker together with him in evangelizing Bukuria. Kivairu agreed but first asked to go back and let the family know that his brother Thomas was alive.

When Kivairu arrived in Maragoli, he told his wife and three sons that they were to pack their belongings because he had answered to the call of God to minister in Bukuria. He made his journey back arriving about a week later and presented his family to Roy. However, Roy was surprised to see them and told him that he would not be able to feed such a crowd. They almost parted ways. Kivairu was adamant that Roy accept his service together with his family because if it was God’s calling then God would provide for them. Roy felt otherwise and so Kivairu sorrowfully started his journey back to Maragoli. But just then, Roy beckoned to him and said that it was okay for him to stay and work together with his family. Roy gave them a hut to stay in. They had to trust on God’s providence for that first season before their fields could produce any harvest.

Kivairu also ministered alongside missionaries Bud Sickler, Arthur Dodzweit, and George Lindsay. He worked with Ms. Eva Butler who was an evangelist instrumental in planting the first church in Masaai, as well as Ms. Edith Knoll who pioneered early education for girls in Bukuria and founded Taranganya girls’ school. In addition, he worked with other early African pastors in Nyanza, such as Henry Nyakwana, Naphtali Odera, and Wallace Opunga.

Churches Where He Ministered

In spite of having only sector school level education, Kivairu had a vision for education. He started schools near many of the churches, using his influence to bring trained teachers from Western province to areas that previously had no schools. For example, when he moved from Taranganya to Arambe village, he planted the church and started a primary school. The senior chief at the time became a stumbling block when the school was started and wanted to shut it down. After much prayer, Kivairu appealed to the District Commissioner (DC) in Kisii regarding the matter. The DC sent a representative, Mr. Paulo Mboya, who ruled that Arambe school should continue. This was a breakthrough for that community in 1949. Thanks to Kivairu’s vision the following schools were started: Taranganya, Nyabikongori, Ikerege, Arambe, Ogari, Achuth, Osingo, Mariwa in Kisii, and Luoro. He also pioneered the start of Oyani dispensary which is now a health center providing modern day treatment for the community of East Kanyamkago.

Throughout his ministry, Kivairu trusted in the faithfulness of God believing that he who had called him was faithful and able to keep him. Many anecdotes are told of God’s provision and of his protection when he had to walk long distances to minister sometimes at night in the wild. God’s protection was very real for him and he often said that God’s servant must not fear.

At the start of his ministry, God provided for his work with Roy Hill in Bukuria before he had time to plant and reap his own harvest. A story is told that when Kivairu and his young family retired to their hut that first night, a porcupine ran into the hut. Not wanting to kill it, he put a basket over it hoping to release it back into the wild in the morning. Within minutes, a loud crowd was heard outside his hut and he feared that the neighbors perhaps being angry with him were out to harm him. However as the people came closer, the spokesperson inquired about the animal that had been seen coming into his hut. James pointed to the basket and the man lured it out where they speared it. Apparently the porcupine was a delicacy in that area. The excitement continued as the group of men took the carcass with them. An hour later, James and his family heard a group of women talking and laughing and the voices came closer and closer to their hut. When he peeked out the door, there was a line of almost twenty women with baskets and baskets of food, dried meats, millet, beans, and varieties of nuts. They offered them these gifts in appreciation for the delicacy of the porcupine. This incident was the beginning of a peaceful coexistence with the local people and Kivairu was able to evangelize without fear in that region.

Another anecdote that shows his compassion is the story of Kivairu’s first Maasai convert who had been left to die because he was very ill. He prayed for the man and took him home where his family nursed him back to health. This first convert was instrumental in evangelizing the Oyani Maasai area.

On another occasion, at Nyabikongori, one of the residents started a dispute during one of the crusades about the teaching on the death and resurrection of believers. The local people wanted to kill the evangelists for teaching things that were impossible. Kivairu was able to calm the group leader down and sit with him to explain the Word of God. As a result, people repented and accepted the teaching of our Lord Jesus Christ in Nyabikongori.

Kivairu died and went to be with the Lord on September 15, 1974 at the age of 88. He succumbed to liver complications and died surrounded by friends and family in his house at Arambe village in South Nyanza, Kenya. He had been a Christian for 61 years. He was remembered by many as a visionary leader who was wise and loved the people of God. He had constantly poured his life out in ministry to the unsaved. He had taught the word of God, comforted others and was peace loving.

His Continuing Influence and Significance

The early schools Kivairu started–Taranganya Boys Secondary, Nyabisawa Girls Secondary School, and Arambe Mixed Secondary School–have continued to grow into significant institutions that provide quality education for both boys and girls. These schools have produced significant citizens who continue to serve not only in the local area but throughout the Republic of Kenya.

His ministry was instrumental in helping to bring harmony among the different tribes in the region he evangelized. Initially signified by his nickname Agulu, Kivairu’s influence in fostering a peaceful co-existence between Luo, Luhyia, Kuria, Kisii, and Maasai continues even today in the region.

His ministry also inspired the growth of PEFA churches in other cities in Kenya, including Nyeri, Kisumu, Nairobi, and Mombasa. Although his name has not been mentioned with the other greats who started this ministry, the foundation that was laid has continued to bear fruit as many were blessed by the early work that he started.

2) ELIM support for the work of God

3) Ordination as a Reverend

This article, received in 2014, was written by Mr. David Arthur Akoto, the last born son of James Kivairu, elder at the Arambee PEFA Church in Migori County, Kenya, chairman of the Arambe Primary School board and a member of the Arambe Secondary School board, and by Mrs. Florence Tela, grand-daughter of James Kivairu. She lives in Atlanta, Georgia and serves as an elder at Forward in Faith Church, Atlanta. 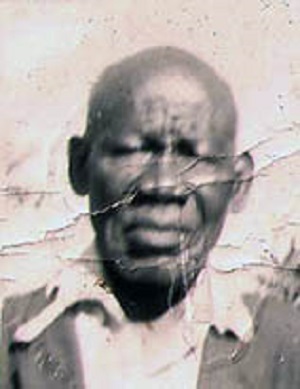 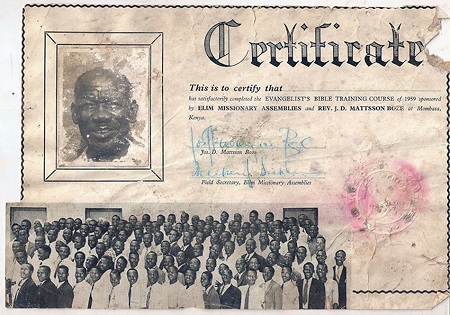