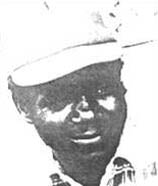 Simeon Oddour Mugenya of the Luo tribe grew up in Western Kenya on the shores of Lake Victoria. He was raised a Catholic and was well educated. He married five wives who all left him and he had no children. He went to Uganda through the influence of his brother Augustine and joined the army.

He became an alcoholic and a brutal bodyguard of the infamous Idi Amin, with whom he travelled all over the world. Oddour Mugenya possibly killed and mutilated over a thousand people. When Amin was overthrown Mugenya began running for his life. He once hid in a crowd at a Billy Graham Crusade and heard the gospel. Oddour went forward to pray and accept Christ as his Saviour and his life was radically changed.

Arriving back home in Kenya in 1980 he ran a transportation business. People still feared him. He did not fully understand what being a Christian meant but he was no longer drinking. He won over three hundred people to the Lord including a Catholic priest and a traditional doctor.

When a Nazarene work and witness team came to build a church in his village he was impressed with their happiness, friendliness, cooperation and hard work. He joined the Church of the Nazarene and was instrumental in planting six new churches. With his infectious smile he testified to everyone. In the mid-1980s Oddour also offered to help with the building of the University in Nairobi.

He married a Christian wife, Mrs. Pamela Oddour (-1999), and they had four children. He was a living testimony to God’s saving grace and was respected by his friends and enemies everywhere for his humble walk with Christ. He had the firm conviction that Jesus walked with him. Oddour won many people to Christ by preaching in the open markets. He planted and pastored the Kabete Church in a slum area. He discreetly helped needy Christians and Bible College students who could not pay their fees. In 1988 he was elected District Nazarene Youth International President.

In 1992 he died of virulent pneumonia in Nairobi. Seven hundred attended the funeral at his home (a seven hour journey from Nairobi). Many cheered at his death and cursed him. Many came to talk to his corpse so that his spirit would not haunt them. His mother praised him as a man feared by many, a strong and wealthy killer, a great drinker. “I have given Africa a powerful man,” she said. But his wife Pamela, weeping, flatly contradicted her, saying, “You are not great to have a son like that. He was not a powerful man but a weak man even though many feared him. He had many wives but no children. But Jesus made him a powerful man and gave him to us and the Lord gave us four children. We in Nairobi know him as a very kind and concerned pastor. I am so blessed. He was a man of God.” [1]