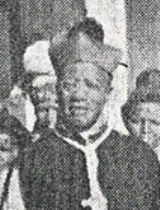 A great grandson of King Moshoeshoe, the founder of the Basotho nation, which later became modern Lesotho, Mabathoana was born on 29 December 1904 in Mokhokhong in Roma, Lesotho. After primary education in Marist mission institutions he entered St. Joseph’s Training College, also in Roma, before going into St. Teresa Seminary in 1924. In 1932 he made his oblate novitiate, and in June 1933 he was ordained, becoming the first Mosotho to enter into the priesthood, after the Reverend Raphael Mohasi.

On the creation of the diocese of Leribe in December 1952, Mabathoana was elected the first bishop of the new Catholic diocese. His consecration, which took place on 25 March 1953, was performed at St. Mica’s Mission in Maseru before an estimated crowd of over 15,000 members of the church and his countrymen. In January 1961 he was made the first Archbishop of Maseru and Metropolitan of Basutoland and was installed in April of that year. As archbishop of the new archdiocese, Mabathoana again became the first African South of the Zambezi to be elevated to such a position in the Catholic Church in the region. In June 1963, on the occasion of the centennial celebrations of the Catholic Church in Lesotho, Archbishop Mabathoana was made Commander of the Order of the British Empire (CBE) by the British Queen Elizabeth II.

He was proficient in Latin, Greek, Italian and German but his reputation as a linguist derived from the extensive work he did on all the major Southern African languages, which culminated in his translation of the Bible into Sotho. He also composed numerous hymns for the Catholic Sesetho Hymn Book. Earlier in 1956 he had served on the Basuland Council, which prepared the revised Southern Sotho Biography. He travelled extensively within his diocese and beyond, visiting numerous countries in Africa, Europe, Asia and the Americas on church business. In 1963 he visited Rome as a member of the Board of the Commission on Missions during the Vatican Council of that year. His visit to Bombay in India in December 1964 was on the occasion of the Eucharistic Congress, where he preached on the Lay Apostolate.

Archbishop Mabathoana died on 19 September 1966, while traveling by plane from Maseru to Pretoria where he was to attend a meeting of the Southern African Bishops’ Conference. 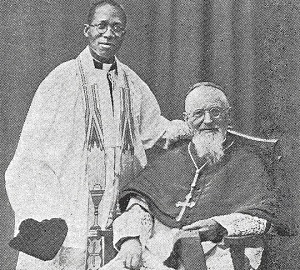 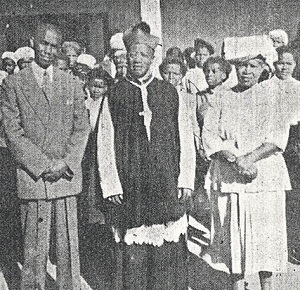