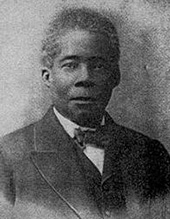 Blyden was born in St. Thomas, Virgin Islands, of pious parents associated with the integrated Dutch Reformed Church of St. Thomas. John P. Knox, American missionary pastor of the church, noted Blyden’s abilities and encouraged him. With his parents’ approval and encouragement from Knox, he decided to become a Christian minister. In 1850 he visited the United States with Knox’s wife and sought matriculation in Rutgers Theological College but was denied admission. Likewise his efforts to enroll at two other theological colleges failed. But while in the United States he came into contact with Presbyterians associated with the colonization movement, under whose auspices he immigrated to Liberia in 1850. In 1851 he enrolled in Alexander High School in Monrovia. He was ordained a Presbyterian minister with the Presbyterian Board of Foreign Missions in 1858. In 1886, having become somewhat sympathetic with Islam and distressed at the arrogance of Christian missionaries, he resigned from the Presbyterian Church. During his lifetime he held a variety of positions in Liberia and Sierra Leone–Secretary of State, ambassador to the court of St. James, Envoy Extraordinary to London and Paris. In 1887 his major work, Christianity, Islam, and the Negro Race, was published. He also wrote many other books, pamphlets, and articles in which he sought to vindicate the Negro race. The roots of the philosophy of négritude, Pan-Africanism, African nationalism, and African Christian theology can be traced to Blyden’s idea of African personality.

—-. The Call of Providence to the Descendants of Africa in America. A Discourse Delivered to Coloured Congregations in the Cities of New York, Philadelphia, Baltimore, Harrisburg, during the Summer of 1862. New York, 1862.

—-. “Our Origin, Dangers and Duties.” The annual address before the Mayor and Common Council of the City of Monrovia, July 26, 1865, the day of national independence; and repeated on Tuesday, August 1, 1865, at Caldwell, St. Paul’s River. Available at HathiTrust.

—-.West Africa before Europe, and other addresses, delivered in England in 1901 and 1903. With an introduction by Casely Hayford. London, C.M. Phillips, 1905. Available at archive.org.

Bediako, Kwame. “’Is Christianity Suited to the African?’: The Legacy of Edward Wilmot Blyden and the Resurgence of a Nineteenth-century Intellectual Problem.” In Christianity in Africa: the Renewal of Non-Western Religion. Maryknoll, NY: Orbis Books, 1995.

Holden, Edith. Blyden of Liberia: an Account of the Life and Labors of Edward Wilmot Blyden. New York: Vantage Press, 1966.

A biographical outline of Blyden’s life.

“A Virtual Museum of the Life and Work of Edward Blyden.”

This article, uploaded in 2021, is reproduced with permission from Biographical Dictionary of Christian Missions, copyright © 1998, by Gerald H. Anderson, W. B. Eerdmans Publishing Company, Grand Rapids, Michigan. All rights reserved.