Rafaralahy Andriamazoto was a rich man who was also married and had several children. His name, Rafaralahy, indicates that he was the oldest child in his family, and the name “Andriamazoto” (“zealous prince”) is the name his Christian friends gave him during the time of persecution.

Rafaralahy was born during the last few years of the reign of the king of the Imerina Andrianampoinimerina - which means “prince in the heart of the Imerina.”[1] Rafaralahy and Rasalama were of the same generation. Rafaralahy became a Christian through the influence of a Christian friend named Rafiakarana. Since in 1831 there were not yet any parishes in his neighborhood, his house in Anjanahary was chosen as a place to pray. He learned to read so that he could understand the Bible well.

On March 31, 1835, Queen Ranavalona I decreed that Christianity was forbidden in her kingdom. All Christians were forced to deny their faith and renounce it publicly, under pain of being condemned to death. Rafaralahy was afraid and took up his former life, engaging in business on Sundays.

He truly converted to Christianity after two significant events. First, his beloved brother was deported to the Sakalava region of the northwest part of the island, where he died. Following that, Rafaralahy became ill. Seven painful boils broke out on his body, corresponding to the seven Sundays on which he had engaged in business, and he became convinced that God was punishing him. He repented, resumed his life as a Christian and began secretly attending prayer meetings. Since his house in Anjanahary was a bit outside of town, Christians went there to meet for prayer.

He also took care of three lepers and had a house built for them near his house in Anjanahary. He preached the gospel to his wife Ratsimindrana, to his household, and to his slaves, whom he also taught how to read.

He comforted those who were denounced when they were in prison, like Marie Rafaravavy. He accompanied and encouraged Rasalama during her martyrdom, going with her all the way to Ambohipotsy, where she was executed. He saw how she was full of faith and courage, singing along the way and before her execution, asking the executioners for a few minutes to pray; and he envied her martyrdom. She was calm and peaceful, and he said to himself, “If that is what dying for Christ is like, I’d like to follow in her footsteps.”

One day, Rafiakarana, the one who had brought him to faith, but who had later renounced his faith, found himself in need. Feeling that he had a moral debt to him, Rafaralahy took him into his business, as an associate. Rafiakarana stole from him, however, and was jealous of him. Fearing that his actions would be found out, Rafiakarana denounced Rafaralahy to Governor Rainiharo, who had Rafaralahy arrested and put in chains. Rainiharo ordered that he be beaten and mistreated so that he would denounce the other Christians, but it was all in vain. Rafaralahy always answered them saying: “You arrested me. Do to me whatever the Queen wishes, but I will not denounce my friends.” After three days in detention, he was given the death penalty.

Thus, on February 19, in 1838, Rafaralahy was executed in Ambohipotsy by being speared to death with assegai [2] just like Rasalama. He was the second martyr of the persecution. On the way to the place of execution, he didn’t sing, but had a joyful countenance, being ready to die. Before he was executed, he asked for a few minutes to pray and knelt down on the ground to pray. When he got up, he said, “I am ready.” He asked the executioners not to cover his eyes, and lay down on the ground of his own accord to receive the fatal thrust of the spear. His wish to die like Rasalama had been granted.

After his death, his wife was also almost killed, but her life was spared because she was pregnant. His children fell into poverty and his mother was so afflicted by his death that she lost her mind. There was no-one left to care for the lepers, and they died in sorrow and misery.

Years later, Rafaralahy’s martyrdom was not forgotten, and a school was built in his name in Anjanahary in the neighborhood where he was born.

Queen Ranavalona I had thought that persecuting Christians would stop Christianity and keep it from spreading, but the opposite was true: the execution of the martyrs revived the Christian community’s faith. Many other martyrs followed Rasalama and Rafaralahy. Some were thrown from a cliff in Ampamarinana, and others were burned alive in Faravohitra.

William Ellis, Faithful Unto Death: The Story of the Founding and the Preservation of the Martyr Church of Madagascar (London: John Snow and Co., 1876).

Madagascar: Its Mission and its Martyrs (London: London Missionary Society, 1863).

William Ellis, The Martyr Church: A Narrative of the Introduction, Progress and Triumph of Christianity in Madagascar with Notices of Personal Intercourse and Travel in that Island (Boston: Congregational Sabbath School and Publishing Society, 1869).

This article, which was received in 2008, was written and researched by Ms. Berthe Raminosoa Rasoanalimanga, director of the FJKM National Archives Center (1984-2007), who was the recipient of the Project Luke Scholarship in 2008-2009. 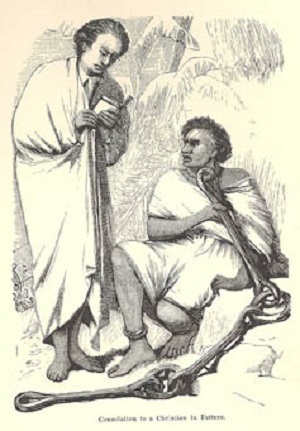 [1] Comfort being given to a Christian in chains, in John W. Mears, The Story of Madagascar (Philadelphia: Presbyterian Board of Publication, 1873) on cover. 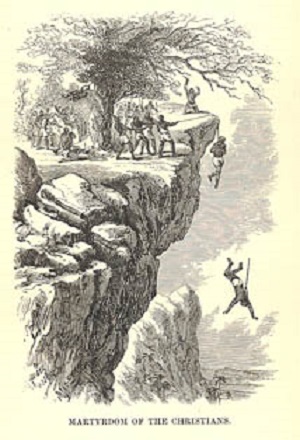 [2] Christians being thrown into a ravine in Ampamarinana, in Mission and Martyrs in Madagascar (New York: American Tract Society, 1864) page 148. 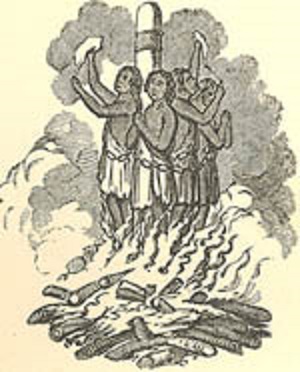 [3] Christians being burned alive in Fravohitra, in Madagascar: Its Mission and its Martyrs (London: London Missionary Society) title page. 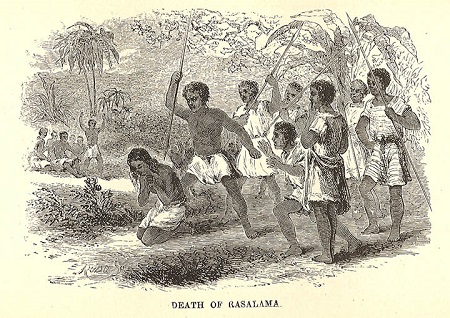 [4] The execution of Rasalama by spearing in Mission and Martyrs in Madagascar (New York: American Tract Society, 1864), page 114.