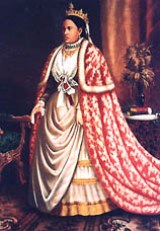 Queen Ranavalona II succeeded Queen Rasoherina, who was her cousin, when she died on April 1, 1868. The fifteen years of her reign brought about various changes to the daily life of the Malagasy people, and some of those changes have lasted until today. For example, the ancestral religious beliefs that formerly served as the foundation of political power were no longer held by royalty.

Ranavalona II (who was named Ramoma) was born in 1829 in the palace of Ambatomanoina, which was in the Masombahiny neighborhood. She was the daughter of Prince Razakaratrimo, who was Prince of Ambohitrambo through his wife. His mother, Princess Rafarasoa Ramasindrazana, was the daughter of the sister of Andrianampoinimerina. According to the rules of succession that were established by the great king, this is how legitimate power was conferred to him. His daughter then, was from the Merina dynasty.

She was given Prime Minister Rainilaiarivony’s hand in marriage, since he represented the Hova lineage, being the son of Rainiharo and Rabodomiarana. [1] He married the three women who reigned, in succession: Rasoherina, Ranavalona II, and Ranavalona III. He was the Prime Minister of Madagascar from 1864 to 1895.

Ranavalona II had no descendents, but her brothers Ramboasalama, Ramahatrarivo, and Ramonjamanana all had many descendants.

Ramoma was raised in an environment that was open to the first Christians, and she even took part in some of the secret prayer meetings that were held during the years of persecution. She was raised by Rainiasivola. [2] Her brother Ramonjamanana, who was also called Ramonja, was a Christian Prince. Ramoma was one of the students of Andriantsiamba, [3] who was a friend of her brother Ramonja. She had met him at her brother’s house, in Imarivolanitra. Andriantsiamba had asked her to convert to the Christian faith, and it was Razafinirina [4] who gave her a Bible. Ramoma was an active and intelligent woman who had already become a Christian before she became Queen.

As soon as she became Queen, she sent a comforting letter to the missionaries of the LMS (London Missionary Society) [5] who were working in Madagascar, promising them that she would do what she could to help them.

The night before she was crowned Queen, she had prayers in a private meeting with the Prime Minister and with pastors Andriambelo, Andrianaivoravelona, Rainimanga Rahanamy, Ratsilainga and Rainitavy - who were all great pastors, having matured in the faith because of the persecution - in order to place in God’s hands the heavy burden that she was about to shoulder.

On the 3rd of September, 1868, in Andohalo square, Princess Ramoma was crowned Queen Ranavalona II. She was the first to be crowned as a Christian Queen in Madagascar. She was assisted by three pastors, one of whom was Andriambelo, and instead of seeing the royal idols, the people saw that on a table nearby, within reach, there was a Bible.

On all four sides of the queen’s baldaquin one could see, in gold letters, the biblical text of Luke 2:14. On the south side: “Voninahitra any ny Andriamanitra amy ny Avo Indrindra,” (Glory to God in the highest,); on the west side: “Fiadanana amy ny tany,” (and on earth peace); on the north side: “Fankasitrahana amy ny olona.” (to men on whom his favor rests.); and on the east side: “Andriamanitra no antsika.” (God is with us.).

Upon her accession to the throne, Ranavalona II promulgated the Code of the 101 articles. Among other things, it stipulated that there was to be freedom of religion in her kingdom. She repealed everything from the traditional mores (polygamy, for instance) that was in opposition to the general principles of Christian morality. She published a decree mandating education for all children and adolescents to age fourteen, including girls. This educational decree was in effect for regions as distant as the Betsileo, and affected education in the various social milieus that had been undertaken by missionaries of the L.M.S.

Her reign was marked by great historical events that revived Christianity in Madagascar after it had seen a long period of Christian persecution under Ranavalona I (1835-1861), who was her aunt. This renewal had a great impact on Malagasy mores, as society adopted a more Christian morality; in addition, no-one was sentenced to die by decree of the queen alone.

Queen Ranavalona II did many things to establish the Christian religion. The year 1869 was given over to the destruction of sampy (idols)–beginning with those of the Queen–and to implementing the decree that all idols and talismans owned by the various clans and families were to be destroyed. Protestantism increased in the ranks of the dignitaries of the court as well as among the general population.

On Sunday the 29th of February, 1869, the Queen and her husband, the Prime minister Rainilaiarivony, were baptized by pastor Andriambelo in Imanampisoa, one of the royal houses built within the enclosure that comprised the palace grounds. The assembled guests included the royal family, the dignitaries of the court, and the leaders of the churches in Antananarivo. Everyone was moved to tears, including pastor Andriambelo, as they witnessed the Queen take the sacramental oath: God alone would be her master until she died. That the Queen would be baptized was something that would have been completely unimaginable only ten years before. Their marriage was also consecrated by the Church during the same ceremony, and they became members of the Holy Communion on the 4th of July in the same year, following four months of catechism.

Every year at Christmas, Ranavalona II showed her support for the work of evangelization by giving liberally to the Protestant church, allowing it to maintain its nine parishes in Antananarivo as well as their related work in the rural vicinity. Her contribution made it possible to send evangelists out into the regions that had not yet been reached by Christianity.

In July of 1868 Queen Ranavalona promulgated a law which allowed for construction using brick and stone. Before that, houses were built of “living” material, or perishable materials like wood or bamboo. The Rova (palace) and the entire city took on a different aspect. The exterior façade of the Rova was also covered in stone. In the capital city, from 1867 to 1870, churches that to this day are called trano vato (“built of stone”) were built and dedicated to the remembrance of the martyrs. These can be found in Ambohipotsy (Rasalama, martyr), in Faravohitra (to the martyrs burned by fire), and in Ampamarinana (to those who were thrown from cliffs). Other brick churches were built in the capital as well as throughout the Imerina and Betsileo regions. From an urban point of view, the reign of Ranavalona II had a significant impact on the look of the city because increasingly large and sturdy buildings were built.

The greatest monument left to posterity by Ranavalona II was the church of Anatirova (the palace church). Built of stone, it was conceived by an L.M.S. missionary, William Pool, who also oversaw the construction. The first stone was laid on July 20, 1869. The church was dedicated on April 8, 1880, and proved to be revolutionary in relation to the spatial conception of the Malagasy people.

The reign of Ranavalona II was also marked by rapid westernization which was due to an intense collaboration with British missionaries. This westernization also led to the “Code of 305 articles” which was adopted in 1881, and which abolished polygamy. This Code also generally became the norm for the political and social life of the Malagasy people. The Queen also followed the lead of Queen Rasoherina, who was her cousin and predecessor, in continuing to prohibit all trade in alcohol and in slaves.

In addition, Ranavalona II was able to appease the discontented French when she sought to revoke the Franco-Malagasy treaty of 1868, which implied an implicit recognition of France’s control over Madagascar. Nonetheless, in reprisal, the French bombarded the principal ports of Tamatave and Majunga in 1883.

Ranavalona II died a few months later, on Friday July 13th, 1883, at the age of 54. On Monday the 16th of July, her mortal remains were brought to the palace church, within the palace grounds, for a service of thanksgiving. The Prime Minister and all the highest dignitaries of the court were present, as well as the missionaries of the London Missionary Society, the Friends’ Foreign Missions Association (F.F.M.A.), the Norwegian Mission Society (N.M.S.), and the Society for the Propagation of the Gospel (S.P.G.) as well as other foreign representatives. She was buried in the royal tomb that is on the palace grounds in Anatirova.

Her cousin Ranavalona III succeeded her and ruled from 1883 to 1896. She was the last Queen to rule Madagascar before the French occupation of August 6, 1896, when Madagascar was declared a French colony.

This article was received in 2008. It was written and researched by Ms. Berthe Raminosoa Rasoanalimanga, Director of the Centre National des Archives FJKM (1984-2007) [National Archives], who was the DACB Project Luke Scholar for 2008-2009. 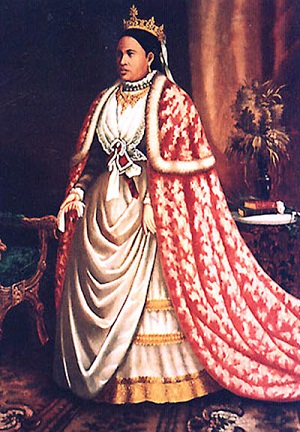 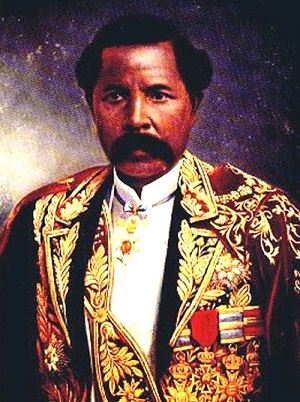 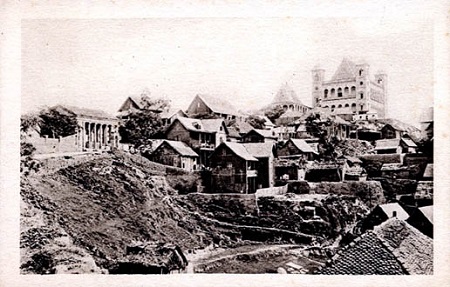 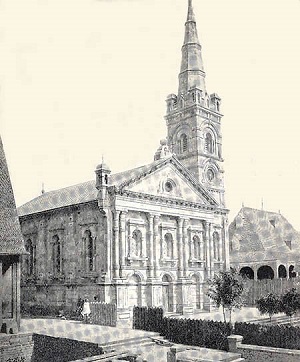 [4] The Palace church in Anatirova-Antananarivo, in The Madagascar Mission, Sibree, p. 51. 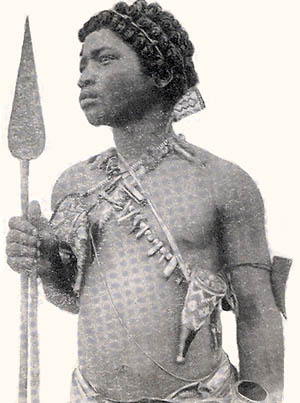 [5] A healer with his talismans, in Fifty years in Madagascar, Sibree, p. 41. 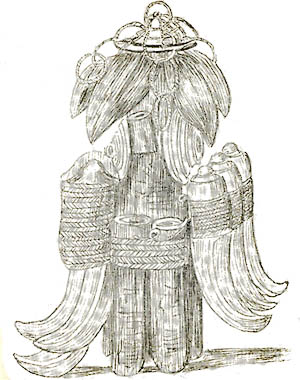