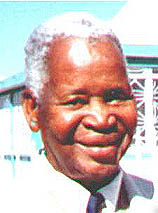 In 1978 Julio Langa was the lay pastor who first began Nazarene services under a tree in the city of Nampula.

Nampula Province is in the far northeast of Mozambique, sharing borders on the north with Cabo Delgado province (next to Tanzania), on the south with Zambezia Province, and on the west with Nyassa Province and Malawi. To the east is the Indian Ocean. The people are the Makua, and many of them live as subsistence farmers. Much of the country is woodland and forest. The main industries are fishing and agriculture. The chief crops that are exported are cashew nuts, tea, cotton, rice, and sugar. The population is predominantly Islamic, with some Roman Catholics or traditionalists. Until the mid-1980s there were scarcely any Protestant Christians in the province. According to Portuguese government policy, Protestant churches had not been allowed to work in these northeastern provinces of Mozambique.

Julio Langa was born near Tavane in Gaza Province and attended Tavane Nazarene School where he found the Lord. He showed great zeal in soul-winning and evangelism and gave evidence of having outstanding gifts for this work. This was recognized by the church and he was granted a lay preacher’s licence. He married Flora, and they have four children.

Julio went to a Nurses Training College in Maputo and qualified as a male nurse. Then in 1978, while working in a hospital in Maputo, he was transferred by the government to Nampula Central Hospital in the city of Nampula. He found no Nazarenes there at all. One day while out walking he heard joyful Christian singing and discovered a group of Christians of the Church of Christ. He joined them and became a faithful member. Later that year some of his Nazarene friends from the south arrived in Nampula and joined this congregation along with Langa. Among them were David Ubisse and Paulino Macamo.

The number of Nazarenes increased. When they were enough to form their own congregation, they left the Church of Christ and began a Nazarene Church with Julio Langa as their leader. Many Makua people became interested and joined them. They first met under a tree and also started a Sunday school. The congregation grew phenomenally and soon reached about 250 in number. In 1983 Langa began pleading with the Nazarene leaders in the south to send them a trained pastor. In 1987 pastors Manuel Tshambe and Jonas Mulate visited them and found a spiritual and growing congregation. Langa purchased a site for the location of a church and applied to the government for permission to erect a Nazarene Church building. Permission was granted in 1988. The church was officially recognized and granted full permission to carry on work freely.

Since that time churches and districts have mushroomed spectacularly in the northeastern provinces, Cabo Delgado, Nampula, and Nyassa. By 1998 there were six districts, 140 churches and branch churches with an average attendance of about 3687.[1]

Carlos Trindade, a student at eswatini Nazarene Bible College in 1998, knew Julio Langa as his pastor and as a neighbour. He said that Langa was always interested in people and loved to testify and evangelize. He visited people and counseled them in their problems. He was a good man and set a wonderful example as a Christian. He was faithful in his pastoral ministry and showed that he indeed felt God’s call as a pastor.

He always tried to help anyone who was in need. It made no difference to him whether the person was a Christian or not. When there was need he would assist with food, clothes, money, or other help as he was able. This was one of the great secrets of his success in winning people for the Lord and in building the church at Nampula.

Langa retired from his work at Nampula Central Hospital in 1992. After that he continued faithfully working for the Lord and supporting the church in every possible way.